A 63-year old Caucasian man presented to the Emergency Department with fever and renal failure two weeks after a recreational trip to Gambia, Western Africa. Together with his family he stayed at a resort on the seaside, and had a brief visit to an inland rural area where he walked barefoot in the riverbed. He complained of diarrhoea, cramping abdominal pain, stranguria and vesical tenesmus. Recently, he had been referred to a nephrologist because of isolated proteinuria. Physical examination revealed fever and tachypnoea, but no other signs of acute distress or peculiar findings. Laboratory results showed leucocytosis (20 x 109/l, neutrophils 18.3 x 109/l), slightly elevated C-reactive protein (20 x 109/l), normocytic anaemia, and increased serum creatinine (707 µmol/l). Urinary dipstick was positive for protein, blood, leukocyte esterase and nitrite. The patient was admitted to the hospital with suspected urosepsis and acute kidney injury. Cefuroxime, a second-generation cephalosporin, and fluid resuscitation were initiated. Urine and blood cultures grew colonies of Burkholderia pseudomallei, a rod-shaped bacterium which is the causative organism of melioidosis. Consequently, the antimicrobial therapy was changed to ceftazidime. Further radiological investigation revealed a prostatic abscess (figure 1) and finally transurethral drainage was performed. Culture of resected prostatic material also grew B. pseudomallei. The patient slowly recovered. A two-week course of ceftazidime was followed by oral treatment with trimethoprim-sulfamethoxazole and doxycycline, for three months. Unfortunately, his kidney function did not improve and haemodialysis was required. Kidney biopsy revealed end-stage renal disease. 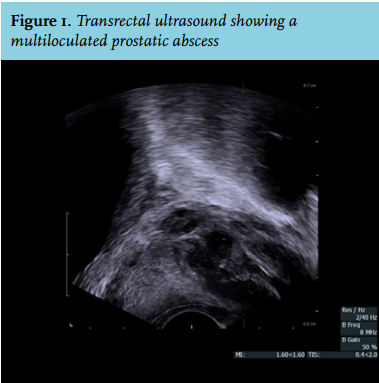 The term melioidosis refers to a clinically variable disease, ranging from local skin infection to fatal septicaemia, caused by infection with B. pseudomallei. This highly virulent, Gram-negative, environmental bacillus can infect humans after exposure to contaminated soil or water.1 Melioidosis is endemic in Southeast Asia and Northern Australia, with Northeast Thailand having the highest incidence (up to 50 cases per 100,000 people).1,2 Case clusters have been reported in Central America and the disease recently emerged in Brazil as a result of improved awareness and diagnostic procedures.3 Very little is known about the distribution of this disease in Africa. During the past 30 years, a total of 11 cases of human melioidosis from Sub-Saharan Africa have been described in the literature.4,5 Table 1 gives an overview of the cases reported in the international literature. Among these, two come from Western Africa (Gambia and Sierra Leone respectively). Moreover, B. pseudomallei has been isolated from soil in Gabon, and one of these strains was isolated in a patient who died of septic shock.6 Lack of sanitary assistance, diagnostic facilities and data collection in rural areas could lead to underestimation of the extension of this disease.6,7 Infection results from percutaneous inoculation, inhalation, or, less frequently, ingestion. The incubation period following documented exposure was shown to be 1-21 days in an Australian cohort from Darwin.8

In our case, a life-long travel history was taken. Patient had travelled regularly to Gambia in the previous years and, more than 40 years ago, he visited Indonesia once. Though an apparent incubation period of 62 years has been described in one report,9 the clear correlation between exposure to wet soil in Gambia and onset of symptoms makes reactivation of a latent infection unlikely.
Currie et al. identified specific risk factors for melioidosis in 80% of symptomatic patients: diabetes, heavy alcohol use, chronic pulmonary disease, chronic renal disease, thalassaemia and, less commonly, glucocorticoid therapy and cancer. In our patient, pre-existing chronic kidney disease could hypothetically have resulted in higher susceptibility to the infection. Severity and course of the disease are thought to result from host and environmental factors, which is why clinical manifestations widely range from a mild infection to fulminant septicaemia, or a chronic condition that may simulate tuberculosis.
The most common presentation of melioidosis is community-acquired pneumonia, occurring in more than a half of all cases, followed by genitourinary infection (14%), skin infection (13%), bacteraemia without evident focus (11%), septic arthritis or osteomyelitis (4%) and neurological involvement (3%).10 Visceral abscesses are very common and can affect almost any organ.7 Melioidosis can potentially cause kidney injury. In a retrospective study including 220 patients with melioidosis, 77 patients with septicaemia developed acute kidney injury.11 In our patient, infection with B. pseudomallei and renal failure coexisted but no causal association could be found.
Mortality rates for melioidosis are approximately 14% in Australia and 40% in Northeast Thailand.10,12 A delay in diagnosis can be fatal, since this microorganism is inherently resistant to most empirical antibiotic regimens (among others first-generation and second-generation cephalosporins, and aminoglycosides). Unfortunately, classic biochemical identification is difficult and often time-consuming. In our case, the Maldi-TOF mass spectrometry (BioTyper, Bruker, Germany) initially yielded an incorrect identification due to an incomplete database. The diagnosis was established by 16rDNA sequence analysis. Subsequent analysis in the Maldi-TOF with an updated database also yielded a B. pseudomallei identification.

The treatment of melioidosis consists of at least 10-14 days of ceftazidime, meropenem, or imipenem administered intravenously, followed by oral eradication therapy, usually with trimethoprim-sulfamethoxazole for three to six months.1
With this case and brief review of the literature, we underline some important epidemiological and clinical aspects of melioidosis. Already endemic in Southeast Asia, this disease is emerging in other tropical and sub-tropical regions, and also present in Gambia. Prompt diagnosis and adequate therapy is crucial, especially in at-risk patients where infection can be aggressive. Depending on clinical picture, imaging techniques are needed in order to spot visceral abscesses and eventually perform drainage.