A diagnostic tool for self-poisoned patients: Analysis of gastric content and lavage fluids

Self-poisoned patients are a high burden for emergency departments (EDs)1-6 and intensive care units (ICUs).6-8 Self-poisoned patients are often considered unreliable, as they can either under- or overestimate the amount of medications taken. Patients history can be difficult due to a lowered consciousness9 or amnesia, as a result of the intoxication.10 In addition to toxidromes and clinical features,11 clinicians therefore often use qualitative and quantitative drug analysis in blood and urine. Laboratory analysis can be helpful in the management of a self-poisoned patient, as it may provide additional clues.12 Previous research has shown that in 18% of cases of self-poisoning, clinically important differences were found between information available at admittance and information gained with analysis of body fluids.13 Various analytical techniques might be available in the laboratory. Each analytical method however, has its own benefits and limitations, that vary from duration of the analysis to the specificity of the method and may therefore be a challenge in patient care.14 Another challenge is that it is not always possible to obtain usable patient material (e.g., blood or urine) from an intoxicated patient. The care for intoxicated patients may therefore benefit from analytical methods for the determination of drugs in alternative matrices.
In this letter, we describe how we performed analysis of gastric content acquired by either aspiration or gastric lavage. We describe how this method, in our opinion, has the potential to aid patient care and how it can possibly provide insight in toxicokinetics, and how it may improve the effectiveness of certain interventions, such as gastric lavage.

The Erasmus University Medical Center (Rotterdam, the Netherlands) is a tertiary hospital with approximately 30,000 ED visits a year. In approximately 500 patients suspected for (severe) intoxication, toxicological analysis is performed. The laboratory of the hospital pharmacy has various analytical methods for blood and urine samples, which are validated according to the Food and Drug Administration (FDA) and European Medicines Agency (EMA) guidelines. No validated method for toxicological screening of gastric content is available.
The duration of analysis differs between methods. On average, including time for sample preparation, analysis of a sample via autoanalyzer requires approximately 30 minutes. Dedicated methods for one drug or one group of drugs requires approximately one hour. Toxicological screening via Ultra performance liquid chromatography - tandem mass spectrometer (UPLC-MS/MS) (regardless of sample type), including sample preparation, requires approximately two hours.
Samples of gastric content were collected from three patients admitted to the ED, in whom gastric lavage was performed as part of routine patient care. Samples were thoroughly mixed to ensure that all compounds were dissolved and were then prepared for analysis in the same manner as the validated blood sample preparation. Then samples were analysed via toxicological screening (UPLC-MS/MS, Waters). 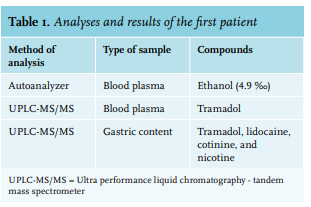 The first patient was a male who was found unconscious (Glasgow Coma Scale E1M1V1) next to an empty bottle of hard liquor and blister packs accounting for a maximum of 60 tablets of tramadol 50 mg. Clinical presentation was in accordance with a hypnotic/sedative toxidrome. The patient was intubated and his stomach was pumped. Results of the different analysis performed can be found in table 1. The second patient was a male who presented at the ED after a suicide attempt with approximately 40 tablets of lormetazepam 2 mg and approximately 40 tablets with prolonged release of metoprolol 50 mg. His prescribed medication also included paroxetine and quetiapine. He was treated with glucagon and high-dose insulin and glucose. Gastric lavage was performed approximately six hours after ingestion, because of the potential severity of the intoxication and the ingestion of prolonged release tablets. This resulted in 3.75 litres of lavage fluid. Metoprolol was then quantified via UPLC-MS/ MS (Thermo). The sample had to be diluted 100 times since the concentration outreached the upper limit of quantification. Metoprolol concentration in the diluted sample was 575 µg/l and thus 57500 µg/l or 57.5 mg/l in the undiluted sample. Since the sample was taken from 3.75 litres of homogenous lavage fluid, approximately 200 mg of metoprolol (approximately 10% of the estimated ingested tablets) was present in the lavage fluid. Table 2 shows the results of all performed analyses in this patient.

The third patient was a female who was intubated prehospital by a mobile medical team because of a lowered consciousness (Glasgow Coma Scale E1M1V1). There was a high suspicion of an intoxication with clomipramine and lipid emulsion therapy was initiated in the prehospital setting. In the ED, gastric lavage was performed. Table 3 shows the results of the different analyses.

In this manuscript, we describe three self-poisoned patients with potentially severe intoxications, in whom we performed analyses on gastric content.
In patient 1, we found tramadol in the blood and tramadol, cotinine, nicotine, and lidocaine in the gastric content. This demonstrates the possibility of detecting toxins in gastric content with toxicological screening via UPLC-MS/ MS. We believe that lidocaine – used during the intubation to lubricate the tube - was present in the gastric content only because it is metabolised rapidly after absorption and thus not detectable in the blood. This also indicates that it is possible to detect toxins that are not yet (fully) absorbed in the gastric content, and that this analysis can therefore provide information about the type and severity of the intoxication that can be expected.
In patient 2, we identified metoprolol in both the blood and gastric content, even six hours after ingestion. We also could quantify the metoprolol level in the gastric lavage fluid. This shows that gastric analysis can be used to provide new insights into the effectiveness of gastric lavage and may also be used as a tool in research. Furthermore, although the patient’s story was deemed reliable in this case, we determined that the patient had also ingested quetiapine and paroxetine, which were unreported by the patient. This illustrates that analysis of gastric content can help verify a patient’s story and perhaps fill in missing information that can better inform the course of treatment.
In patient 3, we confirmed the findings of patients 1 and 2. We found more toxins in gastric content than in blood. Due to lipid therapy, the patient’s blood was lipaemic; lipophilic drugs that were present may have high affinity for the lipid phase. When blood plasma samples are prepared, these drugs may precipitate and therefore not be measured in the analysis. Gastric content is not affected by lipid therapy and may provide additional information when analysis of blood samples is impractical (e.g., in lipaemic samples). Analysis of gastric content in the intoxicated patient is not new and has been previously described in literature.15-19 This research was conducted before 1980 and since then, methods of analysis have improved. Recently, the analysis of gastric contents spiked with different toxins collected in non-intoxicated patients by ambient-mass-spectrometry was described.20 Analysis of gastric content is also used in other fields such as forensic toxicology.21,22 However, gastric analysis in an acute intoxication is not regularly performed. We illustrate that this can provide useful information.

Introduction of this method into clinical practice is only possible when certain issues are resolved. Firstly, the used method for toxicological screening should be validated for analysis of gastric content. Adequate sample preparation and influence of the use of gastric content on the results and the UPLC-MS/MS should be part of this validation. Secondly, analysis of gastric content can at this moment, only be used in patients that either undergo gastric lavage or have an orogastric or nasogastric tube. In current practice, gastric lavage is performed in only a small percentage of patients as indications are limited. Patients with a gastric tube are seen more frequently, for example, patients who are intubated. Gastric contents can easily be acquired in these patients, but it will only provide qualitative results. Lastly, toxicological screening via UPLC-MS/MS, both in blood plasma and gastric content, requires more time than other available methods. Therefore, this method will have the most added value in intoxications with unknown substances. For intoxications with known substances, the use of other methods will be faster and thus more suitable.

In conclusion, we demonstrate that toxicological screening of gastric content has potential as an adjunct in patient care. Our results are promising, but future research is required to standardise and validate methods on obtaining, preparing, and analysing samples and other cautions should be considered before this method can be introduced into clinical practice.