A bone disorder with skin lesions 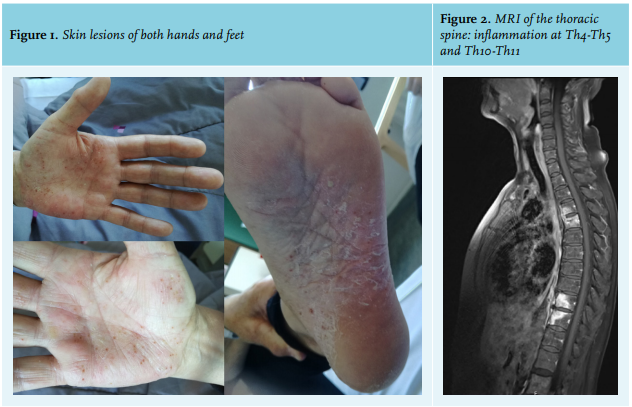 A 61-year-old female, being analysed by a neurologist for back pain, was referred to internal medicine because of an abnormality in the MRI of her spine. The patient was admitted to the hospital with severe pain of the upper back which started four months ago. In addition to this pain, she often experienced sternoclavicular pain and swelling, for which, she took ibuprofen daily. She did not have a fever or any other complaints. Her medical history showed seronegative rheumatoid arthritis of metacarpophalangeal and proximal interphalangeal joints in 2011, for which she was treated with methotrexate and hydroxychloroquine until 2012. She was asymptomatic for years without medication. Physical exam revealed acneiform skin lesions of both hands and feet as shown in figure 1, for which, she used topical clobetasol prescribed by a dermatologist. Laboratory investigations did not reveal any abnormalities with C-reactive protein < 4 mg/l, erythrocyte sedimentation rate  5 mm/h and normal haemoglobin, platelets, leukocytes, kidney function, and liver enzymes. An MRI showed inflammation at Th4-Th5 and Th10-Th11 (figure 2).

See page 400 for the answer to this photo quiz.