An acute infection with the hepatitis C virus (HCV) results in a chronic infection in 70-85% of all cases. Worldwide, approximately 71 million individuals are chronically infected.1 Chronic inflammation can cause liver fibrosis and may ultimately progress into liver cirrhosis with significant morbidity and mortality, which may lead to complications such as hepatic decompensation, liver failure, and hepatocellular carcinoma (HCC).1-3 The rate of fibrosis progression is associated with various co-factors such as increasing age, high body mass index (BMI), elevated serum alanine aminotransferase (ALT) levels, HCV genotype, concomitant alcohol abuse, and co-infection with hepatitis B virus (HBV), or human immunodeficiency virus (HIV).4-6
Transient elastography (FibroScan®) provides a non-invasive measure for liver stiffness which is used to quantitatively assess liver fibrosis. Although FibroScan® is not very accurate for the differentiation between moderate (F2) and advanced liver fibrosis (F3),7 it is well-validated to establish patients with no signs of liver fibrosis (F0-F1) and those with cirrhosis (F4).3,8,9
To prevent further progression of liver fibrosis in chronic hepatitis C (CHC) patients, eradication of the virus is important. Direct-acting antiviral agents (DAAs) have become widely available with little side effects, a relatively short treatment duration and cure rates above 95%.10,11 Achieving a sustained virological response (SVR) with DAAs is associated with a significant decrease in liver stiffness as measured by FibroScan®. 12,13 This absolute decrease seemed to be greater in patients with higher pre-treatment liver stiffness values.12 However, most results are based on liver stiffness measurements (LSM) shortly after end of treatment. Limited data are available about the long-term effect of successful treatment with DAAs on LSM in patients with pre-treatment advanced liver fibrosis or cirrhosis.
The goal of our study was to assess the change in liver stiffness using FibroScan® after successful DAA treatment in patients with CHC mono-infection and pre-treatment signs of advanced liver fibrosis or cirrhosis (FibroScan® ≥ 9.5 kPa). 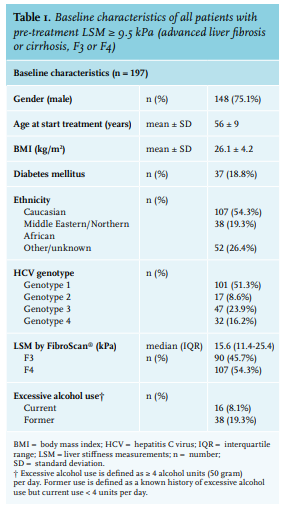 Study design and population
In this observational retrospective cohort study, we included mono-infected CHC patients who were successfully treated with DAAs from January 2014 to August 2018 at the Amsterdam University Medical Center (UMC), location Academic Medical Centre (AMC), and Onze Lieve Vrouwe Gasthuis (OLVG), location Oost, both in Amsterdam, the Netherlands. All adult patients who were successfully treated (i.e., achieved SVR) with DAAs for their chronic Hepatitis C Virus (HCV) infection with an available FibroScan® result prior to treatment and during follow-up were included. Exclusion criteria were co-infection with human immunodeficiency virus (HIV) or hepatitis B virus (positive Hepatitis B surface Antigen), concomitant liver diseases (such as primary sclerosing cholangitis, haemochromatosis, or auto-immune hepatitis), and a medical history of hepatocellular carcinoma (HCC).

Data collection
Medical record data were retrospectively collected. The following baseline characteristics were collected: age at onset of DAA treatment, gender, ethnicity, HCV genotype, body mass index (BMI), excessive alcohol use (defined as ≥ 4 alcohol units (50 gram) per day), and comorbidities such as diabetes mellitus. Laboratory values at baseline and 12 to 24 weeks after end of treatment (EOT) were collected, including HCV-RNA, liver enzymes, and platelet count. Alanine aminotransferase test (ALT) levels were quantified by automated techniques at each participating centre. The upper limit of normal (ULN) for ALT were ≥ 34 U/ml for female and ≥ 45 U/ml for male. SVR was defined as an undetectable HCV-RNA 12 to 24 weeks after EOT.

Assessment of liver stiffness
Liver stiffness was evaluated using transient elastography, FibroScan® (Echosens, France). Liver stiffness  measurements at baseline and at one or more time points during follow-up were collected. Staging of liver fibrosis was based on the following cut-off values: ≤ 7.0 kPa for F0-F1 (no or mild fibrosis), 7.1 to 9.4 kPa for F2 (moderate fibrosis), 9.5 to 14.5 kPa for F3 (advanced fibrosis), and ≥ 14.6 kPa for F4 (cirrhosis).9 In clinical practice, FibroScan® was not repeated after successful treatment in patients with no signs of fibrosis using FibroScan® prior to treatment. Therefore, only patients with baseline FibroScan® ≥ 9.5 kPa were included and categorised according to the baseline value into three groups: FibroScan® 9.5-14.5 kPa; FibroScan® 14.6-19.9 kPa; and FibroScan® ≥ 20.0 kPa. Patients without available FibroScan® measurements during follow-up were excluded from the analysis. Follow-up measurements after SVR were categorised from 0 to 24 weeks (FS0-24) after EOT, 24 to 100 weeks (FS24-100) after EOT and > 100 weeks after EOT (FS > 100). For quantification of hepatic steatosis, CAP (controlled attenuated parameter; dB/m) measurements were obtained at baseline and during follow-up.

Secondary outcome
To define characteristics of patients with an improved LSM from ≥ 9.5 kPa pre-treatment to < 9.5 kPa after successful DAA treatment. 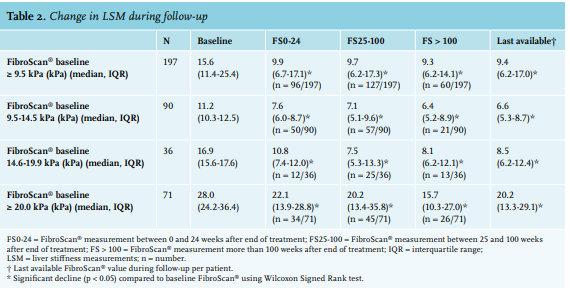 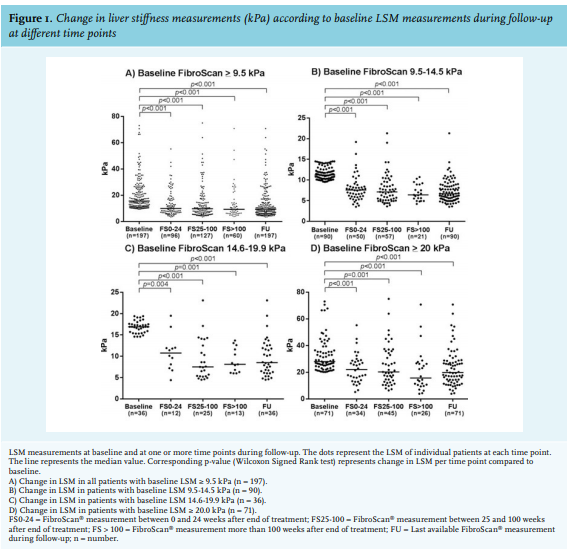 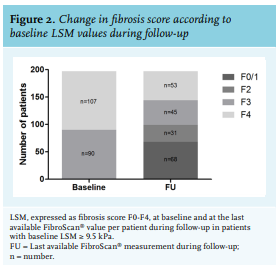 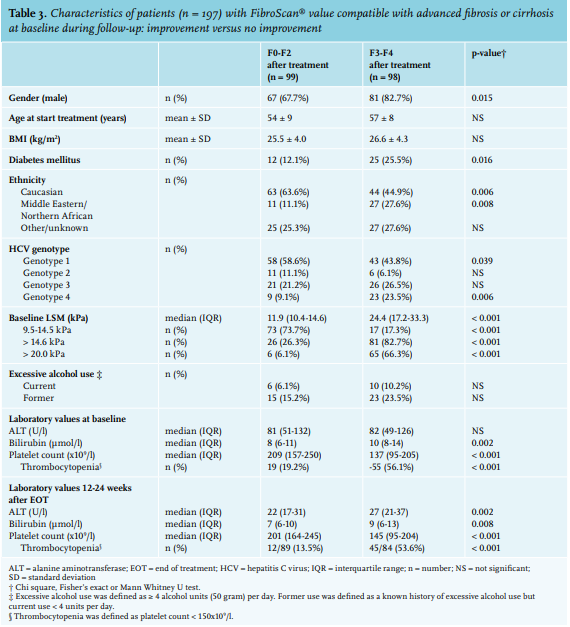 Correlation in LSM and ALT
The median baseline ALT level in all patients was 81 U/ml (IQR 51-126). ALT at 12-24 weeks after EOT was measured in 193 patients and decreased to a median of 24 U/ml (IQR 18-35). When using Spearman’s correlation coefficient, there was a significant correlation between change in LSM (between baseline and last available LSM) and change in ALT (between ALT at baseline and 12-24 weeks after EOT) (p = 0.000). 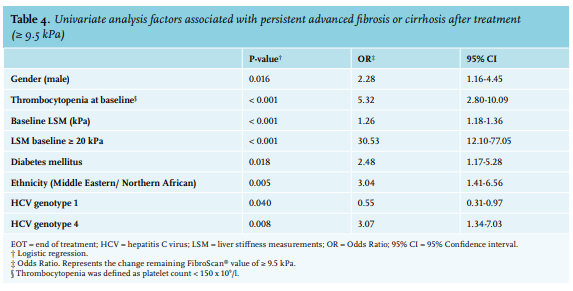 Occurrence of HCC
Two patients developed an HCC during follow up (112 and 85 weeks after EOT, respectively). Both patients had preand post-treatment LSM values of ≥ 20 kPa.

A significant change in LSM from a median of 15.6 to 9.4 kPa was observed in our cohort of 197 patients with pre-treatment signs of advanced liver fibrosis or cirrhosis during a median follow-up of 36 months. In half of these patients, LSM improved to values compatible with mild to moderate fibrosis (< 9.5 kPa). Moreover, in 24.3% of the patients with signs of cirrhosis (≥ 14.6 kPa, F4) at baseline, LSM values improved to values fitting with F0-F2 (< 9.5 kPa). There was no significant change in hepatic steatosis as measured by CAP in our cohort. With a median follow-up of 36 months, our study also shows the long-term effect of successful treatment with DAAs on LSM.
The observed decrease in LSM after successful treatment is in line with previous studies, showing that the largest improvement in LSM is to be expected within the first year of follow-up.12,14 Rapid decline in LSM possibly correlates with resolution of hepatic inflammation.15,16 In our cohort, we did find a significant correlation between decline in LSM during follow-up and decline in ALT 12-24 weeks after EOT. Improvement in LSM may also be explained by liver regeneration after viral eradication.12,17 In our study, we did not have post-treatment histology results to investigate this assumption. Recently, two small retrospective studies compared the results of LSM as measured by FibroScan® with liver biopsy results after SVR in DAA-treated patients.18,19 One study concluded improvement in LSM is overstated when compared to histologic staging but is confirmed with morphometric analysis (i.e., 46% reduction in fibrosis after SVR),18 whereas in the other study LSM did not correlate with post-SVR liver biopsy results-although no morphometry was performed.19 Hence, the presumed beneficial effect of DAA-treatment is mostly based on FibroScan® measurements and not histology-based.12,13,20,21

Achieving SVR with DAAs is associated with a decrease in all-cause mortality and hepatocellular carcinoma.22 In our cohort of 197 patients, only two patients developed an HCC during follow-up. Both patients had a post-treatment LSM > 20.0 kPa. Despite these positive outcomes after successful treatment of CHC, an important unanswered question is whether patients with a baseline LSM of ≥ 9.5 kPa can be safely discharged if their LSM improves to < 9.5 kPa after successful treatment. The current European guideline (2018) for management of CHC states that patients with LSM < 9.5 kPa prior to treatment initiation can be discharged after viral eradication. HCC surveillance should be continued in all patients with a baseline LSM of ≥ 9.5 kPa, despite successful treatment, although no consensus has been reached on the duration of follow-up.23 In our study, with a median follow-up duration of 36 months, multivariate analysis indicated that an LSM value ≥ 20 kPa at baseline (OR 29.07, p < 0.001) is associated with persisting high LSM values, and that patients with a baseline LSM < 20 kPa are more likely to improve in LSM to values < 9.5 kPa after successful treatment. However, studies investigating the long-term outcomes regarding occurrence of HCC in these patients are needed to assess whether they can be safely discharged from surveillance.

One of the strengths of our study is the large sample size of CHC patients with signs of advanced liver fibrosis or cirrhosis who underwent follow-up FibroScan® measurements after successful treatment of their CHC. However, this study also has its limitations. A limitation is the retrospective design, resulting in a heterogeneous group regarding follow-up time and the fact that we used FibroScan® and did not have histology from patients. As the influence of fasting on FibroScan® outcome is only recently recognised,24 it is possible that some baseline FibroScan® values were non-fasting values. This could have caused an overestimation of the decline in LSM during follow-up.

We show that LSM decreases in CHC patients successfully treated with DAAs with pre-treatment signs of advanced liver fibrosis or cirrhosis (≥ 9.5 kPa). Moreover, in 50.3% of the patients with a baseline LSM value ≥ 9.5 kPa (F3-F4), liver stiffness improved to < 9.5 kPa (F0-F2), and in 15.9% of patients with pre-treatment signs of cirrhosis (F4), LSM normalised (≤ 7.0 kPa, F0-F1). A baseline LSM value ≥ 20.0 kPa was associated with persisting signs of cirrhosis or advanced liver fibrosis. Furthermore, the consequences of the observed change in LSM regarding occurrence of HCC and liver-related death needs to be further investigated in long-term follow-up studies. Only with such data a reliable advice can be given upon the indication and duration of follow-up and surveillance after successful treatment of CHC with DAAs.

We would like to extend our sincere thanks and gratitude to the following people who have contributed to this study: N. Mostafavi, PhD, statistician, for her advice, valuable comments, and suggestions that benefited the statistical analysis of our study; J. Saris, MD, for his valuable input into our database; D. ait Moha, for providing an algorithm for data collection from the electronic patient charts; P. Oosterhof, for providing an overview of all treated patients in the Onze Lieve Vrouwe Gasthuis; and R. Engwerda, for English language corrections.

No financial support was received.