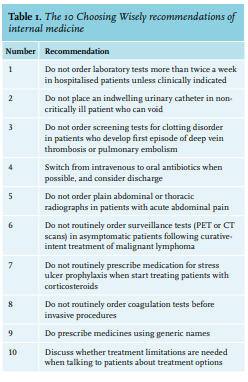 To improve quality of care and reduce healthcare costs, reducing low-value care is a key element. Low-value care is care that is unlikely to benefit the patient given the cost, available alternatives, and preferences of patients.1 In addition, this includes overuse of unnecessary medical care and this may cause harm to patients. Earlier research showed that approximately a quarter of all medical care is. unnecessary.2 The Choosing Wisely campaign, a physician-driven campaign to create conversations between physicians and patients about unnecessary tests, treatments, and procedures, was launched by the American Board of Internal Medicine (ABIM) Foundation in 2012 to address low-value care.3 At this moment, Choosing Wisely has spread to more than 20 countries worldwide. The ‘Choosing Wisely Netherlands Campaign’ started in 2014.4 A main part of this campaign was the creation of Choosing Wisely recommendations by scientific societies, which are evidence-based lists of recommendations or ‘Things Providers and Patients Should Question’ to address commonly used low-value care. The Netherlands Association of Internal Medicine (NIV) developed a list of recommendations of 10 wise choices. The development of the list was by a bottom-up approach, through a survey via e-mail to all NIV members asking for any item to be proposed. Three criteria for a Choosing Wisely recommendation were: (1) evidence based, (2) room for improvement in quality of care and/or costs, and (3) broad consensus. During an invitational conference all subspecialty societies discussed which 10 choices were the best. This leaded to a list of 10 recommendations in Dutch (Supplementary Appendix)*. A translated version is found in table 1.

We actively surveyed physicians and residents to determine the implementation of the Choosing Wisely recommendations in the departments of internal medicine in 2018. The survey was performed during a presentation about the Choosing Wisely Netherlands campaign by a PhD student of internal medicine (BJL). In addition to the survey, the goal of the presentations was to inform attendees once again about the campaign and the current status. For feasibility reasons, we visited half of all university medical centres (UMCs) in different parts of the Netherlands, and one teaching hospital and one nonteaching hospital in the direct environment of that UMC. The presentations were mostly planned during existing meetings, for example the morning report. During the presentation we asked all attendees to vote through VoxVote, which is a free mobile voting tool via the Internet. All attendees, physicians, and residents, were eligible to participate voluntary. The survey contained 11 closed-ended questions in Dutch, including the option ‘not applicable’. Afterwards, there was a discussion per recommendation to evaluate possible barriers for the implementation. There was no incentive for completing the survey. The presentation can be found in the supplementary appendix.

The percentages not applicable were less than 20% for all recommendations (table 3), except for recommendation 6 ‘Do not routinely order surveillance tests in asymptomatic patients following curative-intent treatment of malignant lymphoma’. For this, 62.5% of the attendees stated that this recommendation was not applicable to their clinical practice, because only haematologists treat these patients in the Netherlands. 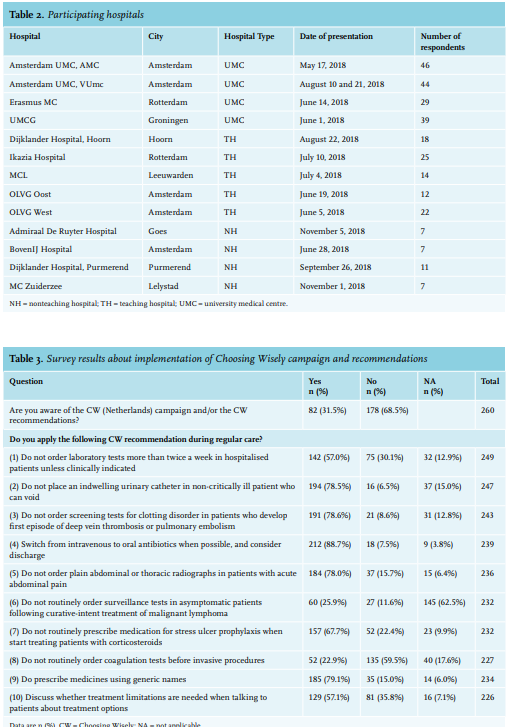 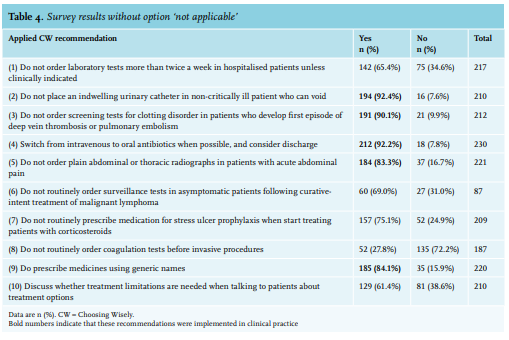 The results without the option ‘not applicable’ are found in table 4. We found that half of the Choosing Wisely recommendations were sufficiently implemented, defined as minimal 80% of the physicians who self-reported that the recommendation was part of his or her regular care.

Table 5 shows the differences between hospital types. The awareness about the Choosing Wisely campaign was the lowest (22%) in the nonteaching hospitals in comparison with 37% in UMCs. Most results of the reported implementation of the Choosing Wisely recommendations were similar between hospital types. However, we found differences in four recommendations, indicating a better reported practice in nonteaching hospitals of recommendations 2 ‘Do not place an indwelling urinary catheter in non-critically ill patient who can void’; 6 ‘Do not routinely order surveillance tests in asymptomatic patients following curative-intent treatment of malignant lymphoma’; and 8 ‘Do not routinely order coagulation tests before invasive procedures’. Further, the implementation of recommendation 10 ‘Discuss whether treatment limitations are needed when talking to patients about treatment options’ was better in teaching hospitals compared to the other hospitals.

Four years after the introduction of Choosing Wisely Netherlands campaign, only 32% of physicians and residents of the departments of internal medicine were aware of this campaign. In addition, this was even lower in nonteaching hospitals (25%). Nevertheless, half of the Choosing Wisely recommendations (numbers 2 to 5, and 9) are implemented in clinical practice. The other recommendations (1, 6 to 8, and 10) are not or insufficiently implemented in clinical practice. 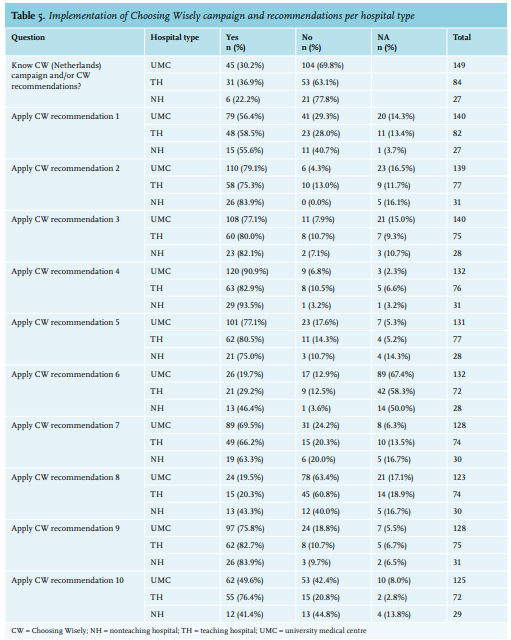 We thank all physicians and residents from the participating hospitals for their participation and interaction during the presentations.

Funding
This project was started in collaboration with the Netherlands Association of Internal Medicine (NIV) and is funded by the national board of medical specialists (Stichting Kwaliteitsgelden Medisch Specialisten). The funder of the study had no role in study design, data collection, data analysis, data interpretation, or writing of the report.

*Supplementary appendix is available from the authors upon request.