Waterpipe smoking: not as innocent as it may seem

Waterpipe (hookah) smoking is very popular, and the number of hookah lounges is growing. Studies in the United States show that waterpipe smoking is almost as popular as regular cigarette smoking.1 A survey in the Netherlands showed that, even though a small fraction (2-8%) of the population uses the waterpipe more than once a month; 26% of responders had experienced smoking a waterpipe at least once.2 Previous publications have described the risks of waterpipe smoking, in particular carbon monoxide (CO) intoxication.3 In this paper we describe a series of CO intoxications after waterpipe smoking and why this problem is likely to be a logical consequence. Furthermore, we discuss the treatment of CO intoxication and the rationale behind fixed treatment duration as described in the Dutch guidelines.

Patient A
Patient A, an 18-year-old male with mild asthma had smoked the waterpipe for one hour. After getting up from his seat, he lost consciousness for approximately two minutes, where after he managed to get up. When he collapsed a second time, bystanders called emergency services. Evaluation by ambulance personnel showed a widened gait and he was transported to the hospital. On assessment in the emergency department, the patient complained of mild dyspnea and a vibrating sensation throughout his body. Physical examination showed normal vital parameters, and pulse oximetry showed a saturation of 100% with no supplemental oxygen. Further physical examination, including neurological evaluation, showed no abnormalities. An echocardiogram (ECG) was unremarkable, and a venous blood gas analysis (VBG) was performed to screen for electrolyte disorders. The VBG showed a carboxyhaemoglobin (HbCO) concentration of 26% (normally ≤ 10% in smokers).4 The patient was treated with oxygen (O2) at 15L/min via a non-rebreathing mask (NRM). A VBG 90 minutes later showed a HbCO of 10% and after two hours, the patient was free of complaints. Further treatment was initiated according to Dutch guidelines in “het Acute Boekje”;5 the patient was admitted for eight hours of treatment with high-flow oxygen, where after he was discharged in good condition.

Patient B
Patient B, a 17-year-old male with no relevant past medical history, collapsed three times after smoking a waterpipe. In between the syncopal episodes, he felt lightheaded and vomited twice. On evaluation in the emergency department, he felt general weakness. Physical examination showed a tachycardia of 115/min, an O2 saturation of 97%, and an occipital haematoma. The ECG and head computed tomography scan were unremarkable and the VBG showed a HbCO of 19%. Treatment with high-flow oxygen was started. After 1 hour and 45 minutes, the patient was symptom-free and the HbCO was normalized to 7%. Because of complete resolution of symptoms, normalisation of HbCO and patient’s strong objection to admission, the patient was discharged home.

Patient C
Patient C, a 24-year-old female with no relevant past medical history, presented after sitting in a hookah lounge for several hours, while only smoking for a brief period of time. After getting up from her seat she felt unstable, weak, and subsequently collapsed. She had had no complaints of dyspnea, palpitations, or headache. In the emergency department, she was free of symptoms. Vital parameters, physical examination and ECG showed no abnormalities. VBG showed a HbCO of 26% and high-flow oxygen was started. After 90 minutes, the HbCO declined to 9% and the patient was free of complaints. The treating physician diverged from the Dutch guidelines and decided to discharge the patient home. He did so because the initial symptoms were only mild and completely resolved; importantly, HbCO levels were normalised.

All three described patients had a different presentation of an intoxication with CO after smoking a waterpipe. Previous publications have described how a waterpipe works and emphasised the fact that waterpipe smoking is more harmful than cigarette smoking.3,6 The best-known source of CO is incomplete combustion; this process plays a role in inhalation of smoke or exhaust fumes or gases from a malfunctioning heater. Yet, during waterpipe smoking another important CO-forming process, known as the Boudouard reaction, may play a role.7
According to this reaction, reduction of CO2 with the hot carbon leads to the formation of CO: CO2 (g) + C (s) → 2CO (g)
This reaction is temperature-dependent, and CO formation starts around 600°K (327°C) and exponentially increases at higher temperatures. Although no reports in medical literature exist on exact burning temperatures of hookah coals, hookah coal manufacturers report burning temperatures up to 650°C. Even though CO production starts dominating the reaction at temperatures exceeding 700°C, the fraction of CO formed may well be relevant in causing CO intoxication.8

In China, the formation of CO in burning coals is so widely known that many suicide attempts are done by burning coals in a sealed room.9
Taking into consideration both CO-forming processes, the chance of exposure to CO while inhaling over a glowing piece of coal is considerable. In electric waterpipes, the reduction of carbon will not play a role considering the absence of hot carbon.
After inhalation, CO has an affinity for haemoglobin 200-300x that of oxygen. Furthermore, the oxygen affinity of CO-free haem groups is increased, thus impairing oxygen delivery. Consequently, CO impairs both oxygen uptake and delivery capacity. Besides the effects onoxygen transport, studies have also shown evidence that CO interferes with the electron transport chain by impairing cytochrome C oxidase function.10 Other experimental (ex vivo and animal) studies show evidence for CO-related oxidative stress and leukocyte mediated-inflammatory changes causing neuronal injury. Although incompletely understood, these non-HbCOdependent mechanisms may explain why symptoms at specific HbCO levels vary widely between patients. Therefore, interpretation of HbCO values alone does not provide a good estimation of the severity of the intoxication. Severe intoxications may present with relatively low HbCO levels, thus clinical symptoms should be leading.

Table 1 describes general staging as described in recent literature.11 Aside from the acute symptoms, CO intoxication leads to persisting or later developing neurologic sequelae in 10-32% of patients. These late symptoms usually occur within days but may take months to develop. A diversity of symptoms has been described ranging from headache to impaired concentration (table 2).12 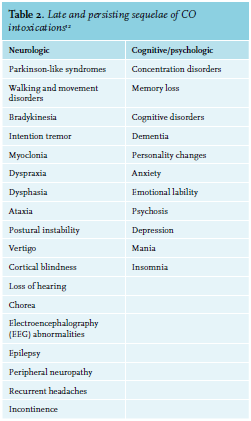 As soon as the clinical suspicion of CO intoxication rises, high-flow oxygen over a non-rebreather mask should start immediately. Diagnostics should consist of a VBG; arterial blood gas has no diagnostic superiority.13 Normal values for HbCO vary from 0-5% in non-smokers to just over 10% in heavy smokers. Thus, HbCO values over 5% in non-smokers and 10% in smokers, in combination with symptoms should be considered a CO intoxication.4,11 Pulse oximeters are not reliable in patients with CO intoxication because they cannot discriminate oxyhaemoglobin from carboxyhaemoglobin. This means the oxygen saturation value indicated reflects the sum of HbCO plus the true oxygen saturation (HbO2).4
Oxygen therapy displaces the CO from the haemoglobin; the half-life of HbCO is hereby reduced from approximately 320 minutes to approximately 75 minutes.9 In some cases, hyperbaric oxygen therapy (HBOT) may be indicated. Using HBOT, it is possible to dissolve an amount of free oxygen in the plasma that meets tissue needs, regardless of the amount of haemoblogin blocked by CO. Moreover, HBOT has also been shown to inhibit leukocyte-mediated inflammatory changes and oxidative stress in the brain.14,15 Several studies have shown a positive effect of HBOT on preventing neurologic sequelae.14 However a systematic review on the efficacy of HBOT in CO intoxication showed conflicting results. The pooled data from the six trials showed an odds ratio for neurologic sequelae of 0.78 (95% CI: 0.54 to 1.12) compared to normobaricoxygen.16 Considering the possible harmful effects (barotrauma, oxygen toxicity) and limited availability, this therapy is only indicated for a limited category of patients. HBOT can be indicated in case of a high-risk intoxication including patients with ECG changes, coma, severe lactic acidosis, or pregnancy. For these patients, early consultation with a hyperbaric centre is essential.
One of our patients was admitted for oxygen therapy; this treatment strategy was chosen based on Dutch guidelines. These guidelines state that any patient with a CO intoxication (with no contra indications for treatment and no indication for hyperbaric treatment), treatment should consist of eight hours of high-flow oxygen. However, evidence for this treatment strategy is weak. The recommended eight hours originate from a study analysing the average time to diminishing of symptoms and normalising of HbCO, during treatment with normobaric high-flow oxygen and HBOT. In the normobaric oxygen group (n = 30), an average of 4.2 hours (SD 3 hours) was found in this study.14 Treatment until symptom resolution and HbCO normalisation seems just as effective in both short and long-term.4 Using this strategy, which is recommended by authorities such as the United States’ Centers for Disease Control and Prevention (CDC), unnecessary admission and exposure to high concentrations of oxygen can be prevented.17 In patients with sepsis, traumatic brain injury, and cardiac ischaemia, hyperoxygenation has been related to adverse effects including increased formation of reactive oxygen species that cause reperfusion injury and worse outcomes.18 These outcomes justify prudence in using high-flow oxygen for an extended period of time.

Waterpipe smoking and using hot coals as a heat source is popular but more harmful than one might consider due to the risk of CO intoxication. A broader awareness of this risk in both waterpipe users and primary and emergency care providers is essential. In patients presenting with altered mental status or atypical neurological complaints, CO intoxication should be included in the differential diagnosis. Informing about waterpipe use and VBG analysis are rapid and simple but essential in diagnosing CO intoxication.
We advise that patients should be treated with high-flow oxygen until symptoms resolve and HbCO normalises. Standard treatment duration is not strongly supported by studies and treatment with high-flow oxygen may well have harmful effects.