Answer to Photo Quiz: A 47-year-old woman with fever and periorbital oedema


The clustering of cases in one family led to a detailed re-examination, including food history. Nine days before the onset of symptoms, the patient consumed slowly roasted wild boar fillet at a local restaurant, together with her siblings. The combination of eosinophilia, elevated creatinine kinase levels and periorbital oedema led to the suspicion of trichinellosis. This was confirmed by biopsy of the quadriceps muscle in the index patient, revealing larvae with morphological features of Trichinella species, subsequently identified as T. spiralis by polymerase chain reaction (figure 2).
Trichinellosis is a rare parasitic zoonosis caused by the ingestion of raw or undercooked meat containing Trichinella larvae. The parasite infects both domestic animals, such as pigs, and wild animals including bears, moose and wild boar and has a worldwide distribution.1 Humans become infected when eating undercooked meat from domestic pigs or game contaminated with encysted Trichinella larvae.2 Sexually matured adult worms produce larvae in the small intestine, which subsequently invade muscle tissue. Two clinical stages are described: an initial intestinal stage with nausea or diarrhoea and a later muscular stage with periorbital oedema, myalgia or muscle weakness as major symptoms. The disease is mostly self-limiting: the adult worms live on average four weeks and the muscular phase is the end-stage of the infection. However, major complications may arise during invasion including myocarditis, encephalitis and pulmonary superinfection.
Our patient was diagnosed with trichinellosis in the second clinical stage. Photophobia and periorbital oedema are related to ocular muscle larval invasion rather than neurological pathology. The diagnosis was confirmed by muscle biopsy and by serology at the National Reference Laboratory for Infectious and Tropical Diseases at the Antwerp Institute of Tropical Medicine. The treatment consisted of oral mebendazole 900 mg for three days, followed by 1500 mg for ten days, with co-administration of methylprednisolone 32 mg once daily. The patient recovered quickly with complete normalisation of the creatine kinase and eosinophil count after two weeks. The need for treatment, choice and dosage of anti-parasitic drugs after the first disease stage is, however, not firmly established.2,3
The incidence rate of trichinellosis has been decreasing in the European Union (EU) during the last decade as a consequence of strict implementation of EU regulations in slaughterhouses.4 The prevalence is higher in Eastern European countries mainly related to consumption of domestic pork. In Western Europe the infection is rare and mostly a consequence of consumption of game meat, hunted locally or imported from countries with a high trichinellosis prevalence in wild animals. As a result of this outbreak in which eventually 16 patients were diagnosed with trichinellosis, the Belgian Federal Agency for the Safety of the Food Chain conducted an investigation focusing on the supply chain of the imported wild boar meat, leading to one certified supplier in North-Eastern Spain. The recalled batches of meat from this supplier were examined as well but none of these samples contained Trichinella larvae, probably because of a delay of several weeks between the consumption of contaminated meat and the start of the investigation. No irregularities were reported in the suspected slaughterhouse. No other outbreaks were reported in the EU at the same time.
This case illustrates an unusual diagnosis in a patient presenting with inflammation and neurological symptoms. It may help to increase the clinician’s awareness of the features suggestive of trichinellosis, particularly in clustered cases. A detailed food history is essential to determine the source of an outbreak. Despite EU measures, in 2015, trichinellosis remains a threat to food chain safety in Western Europe, mainly due to consumption of contaminated game meat. 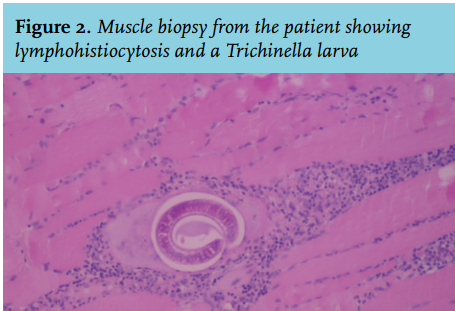