Intermittent abdominal pain and melaena in a 64-year-old man

A 64-year-old man presented with a four-day history of intermittent abdominal pain and melaena. The patient had no past history of cancer and no family history of colorectal cancer. Physical examination revealed mild periumbilical and right lower quadrant abdominal tenderness without rebound tenderness. Laboratory examination showed no abnormality. Contrast-enhanced computed tomography (CT) (figure 1A, 1B and 1C) showed an intussusception in the right lower quadrant: a segment of bowel accompanying blood vessel density and adipose tissue density within the lumen of caecum (arrows). Colonoscopy (figure 1D and 1E) revealed a sausage-like mass with superficial hyperaemia and mucosal erosion in the ileocaecal valve. 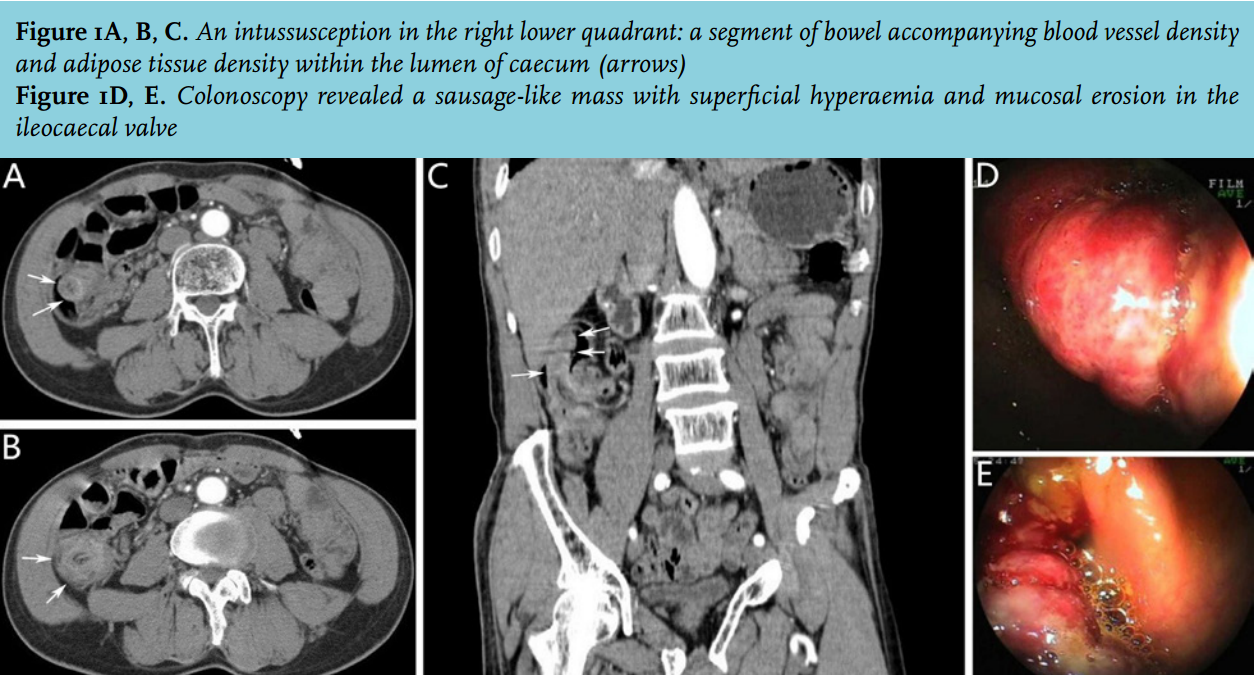 In adults, intussusception is usually associated with a neoplastic lead point and requires surgical exploration with resection.1,5 Our case was considered intraoperatively to be caused by a pure inflammatory lesion and not a neoplastic entity. Thus a simple appendicectomy with a caecal incision was performed. As a result of the postoperative histopathological examination, which revealed acute suppurative appendicitis with periappendicitis, and high-grade intraepithelial neoplasia of the appendiceal tip, a second unnecessary radical resection was avoided. Open surgery should be recommended for this type of appendiceal intussusception, which is described as a completely inverted appendix into the caecum and cannot be manually reduced. Otherwise, when dealing with this type of appendiceal intussusception, a laparoscopic procedure should be completed by the experienced laparoscopic surgeons.