An immunocompromised woman with a lung tumour

A 64-year-old female presented in October 2013 with thoracic pain and dyspnoea for two days. She had lost seven kilograms of body weight in four months. Her medical history included long-QT syndrome and IgA nephropathy. She had received a pre-emptive living related kidney transplantation in October 2012, which was complicated by cellular rejection in April 2013, for which she received methylprednisolone and anti-thymocyte globulin. Due to ongoing rejection this was followed by alemtuzumab one month later, with partial recovery of kidney function. At presentation, the physical examination was unremarkable. Her body temperature was 37.8°C. Laboratory analysis showed leucocytes 19.2 (4-10) x 10*9/l, thrombocytes 557 (150-400) x 10*9/l, creatinine 304 (< 90) µmol/l (stable), lactate dehydrogenase 279 (<250) IU/l and C-reactive protein 65 (< 8) mg/l. Chest X-ray showed a tumour in the right lung (figure 1). Computed tomography (CT) showed a dense inhomogeneous mass with partial atelectasis and air bronchograms, pretracheal lymphadenopathy and bilateral pulmonary nodules (figure 2). Bronchoscopy showed no endobronchial lesions and a bronchoalveolar lavage and brush were performed. No malignant cells were found and cultures were negative for pathogenic microorganisms. A transthoracic biopsy was performed for histology, showing a granulomatous inflammatory reaction. Gram, Ziehl-Neelsen and PAS-D staining and polymerase chain reaction for mycobacteria were negative. 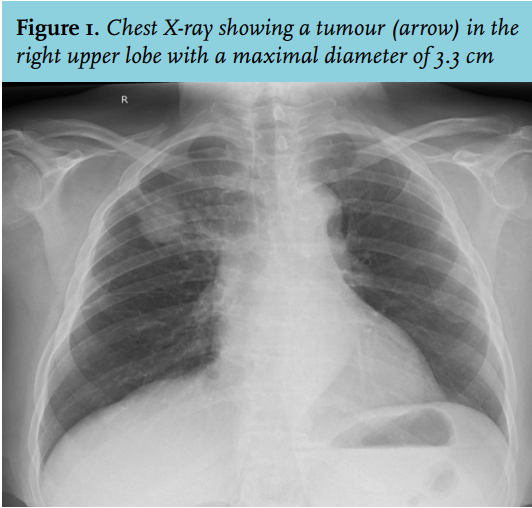 Nocardia is a bacterium which belongs to the family of aerobic actinomycetes, characterised as Gram-positive branching filamentous rods that produce fungus-like colonies in culture.1 Nocardiosis occurs mainly in immunocompromised patients, e.g. renal transplant recipients.2 This has previously been discussed in this journal.3 Nocardia species are ubiquitous in soil and aquatic environments. The main route of acquisition is by inhalation or the skin. Nocardiosis can manifest solely in the lungs or cutaneously, but Nocardia species can also disseminate to distant organs.3 They can be recovered on growth media for bacteria, mycobacteria or fungi but may be obscured by more rapidly growing commensal bacteria; therefore, a selective medium should be inoculated for at least two weeks.4 Nocardia species are susceptible to different antibiotics: sulphonamides and trimethoprim work synergistically, therefore TMP-SMX is regarded as the preferred treatment. In pulmonary or systemic nocardiosis, treatment should be at least three months,4 whereas some authors advocate life-long prophylaxis afterwards, also depending on the necessity of life-long immunosuppression.2

In our patient, who turned out to be a frequent gardener, the diagnosis of pulmonary nocardiosis was made based on the positive biopsy culture and the absence of other findings suggesting systemic nocardiosis including a negative brain CT scan. She was treated with doxycycline and amoxicillin-clavulanic acid as TMP-SMX was contraindicated because of her long-QT syndrome. After three months of therapy, an excellent clinical and radiological response had been achieved. Thereafter, treatment was switched to doxycycline, because of presumed adverse effects of amoxicillin-clavulanic acid (nausea). This secondary prophylaxis was given for an additional three months. In addition, her immunosuppressive medication was diminished in dose. To date, i.e. seven months after doxycycline discontinuation, no signs of recurrence were experienced.

In conclusion, in immunocompromised patients with clinical signs suggestive of a malignancy, opportunistic infections such as nocardiosis should always be considered. To prevent missing the diagnosis, a biopsy should be performed for histology, including Gram staining, and for appropriate cultures, incubated on special agars and for an appropriate time.