A 22-year-old female was seen at our outpatient clinic because of a palpable mass in the left upper abdomen. She noticed the mass five weeks after she gave birth to a healthy girl after an uncomplicated delivery. She denied abdominal pain, weight loss, fever, or night sweats. She had travelled to Turkey eight years ago and around that time, fell from a horse but without apparent abdominal trauma. Physical examination revealed a palpable firm mass three fingers below the costal margin. Blood tests showed leucocyte count of 7.5 (normal range [NR] 3.5-10.0 x 109/l) with a normal differentiation; haemoglobin 8.4 (NR 7.5-9.5 mmol/l); platelets 210 (NR 150-370 x 109/l); C-reactive protein 1.9 (NR 0.0-9.0 mg/l); and erythrocyte sedimentation rate (NR 0-19 mm/h). 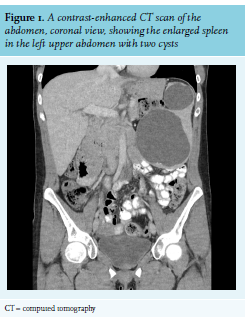 An ultrasound was performed, which showed an enlarged spleen with two cysts with diameters of 11 and 5.5 cm. A contrast-enhanced computed tomography (CT) scan of the abdomen showed two homogenous hypodense abnormalities in the spleen (figure 1). The patient returned to the outpatient clinic earlier than planned because she felt pressure in the lower abdomen and experienced pollakisuria without dysuria. Upon physical examination, a mass was palpated in the lower abdomen. Pregnancy test was negative. A new ultrasound was performed, which showed that the spleen (no change in diameter or cysts) was located in the lower abdomen, cranial to the bladder. Serology for echinococcus granulosus was negative. In the absence of signs suggestive of malignancy, the cysts were felt to be congenital or post-traumatic.

See page 145 for the answer to this photo quiz.