It is well-known that oestrogen-deficient states are a risk factor for osteoporosis. Bone mineral density (BMD) decreases dramatically in postmenopausal women and in women with Turner syndrome, Kallmann syndrome, and premature ovarian insufficiency.1,2 Likewise, women with functional reproductive axis dysfunction (RAD), due, for example, to eating disorders or high-intensity sports activities, have a higher risk of low BMD. While the unifying factor in these states is the lack of oestrogen, the effect of oestrogen replacement on bone health is less than consistent. Oestrogen replacement improves BMD in many conditions, but there is a lack of a consistent relationship between oestrogen replacement and improved BMD in RAD. This suggests that there is another factor driving decreased BMD in women with RAD, and that the key to treatment is to look beyond oestrogen replacement.

Menopause
The most common and best-studied state of oestrogen deficiency is menopause, which is biochemically reflected in a decrease in oestrogen and an increase in folliclestimulating hormone (FSH) and luteinizing hormone (LH).3 Shortly after the onset of menopause, BMD decreases rapidly for the first 1-2 years after the final menses, with estimates of losses per year of 2.46% at the lumbar spine and 1.76% at the femoral neck.4 This may lead to osteoporosis and bone fracture. Replacement of oestrogen in postmenopausal women is associated with increased BMD, with the 1996 Postmenopausal Estrogen/Progestin Interventions trial finding an average increase of 1.7% of BMD at the hip and a 3.5-5.0% average increase in spinal BMD for postmenopausal women taking oestrogen.5 Risk factors for osteoporosis include advanced age, increased length of amenorrhea, family history of fracture, decreased dietary calcium intake, low body mass index, smoking, reduced physical activity, and increased alcohol intake.4-6 The pathogenesis of this oestrogen deficiency-induced decrease in BMD appears to be loss of protective effects by oestrogen on the osteoblast/osteoclast ratio. Osteoblasts form new bone and are balanced by osteoclasts, which reabsorb bone. Osteoclasts are members of the monocyte-macrophage family and differentiate in response to macrophage colony stimulating factor (M-CSF) and receptor activator of nuclear factor kappa-B ligand (RANKL), the former being expressed on osteoblasts and binding to its receptor on osteoclast precursors.3 The RANKL receptor competes with the decoy receptor osteoprotegerin, which is secreted by osteoblasts to decrease osteoclast activation. Oestrogen induces osteoclast apoptosis and inhibits osteoclast development, perhaps by decreasing the responsiveness of osteoclast precursors to RANKL (figure 1). Oestrogen may also decrease production of RANKL and increase osteoprotegerin production. The immune system may also play a role in postmenopausal osteoporosis. T cells appear to be key regulators of the development and activity of osteoclasts and osteoblasts, although reduction in B-cell numbers may influence the development of osteoporosis.3 Cytokines also have an effect, with a decrease in oestrogen correlating with an increase in pro-inflammatory cytokine product 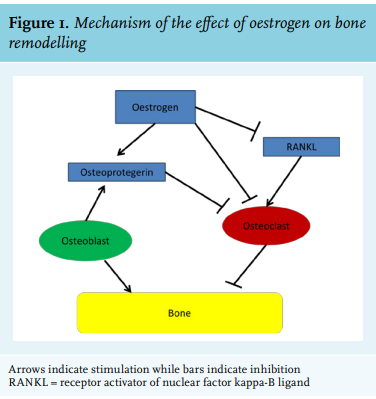 Reproductive axis dysfunction
Perhaps most similar to Kallmann syndrome is hypothalamic amenorrhea, in which dysfunction of the reproductive hypothalamic-pituitary-ovary axis occurs due to environmental or physiologic stress, such as decreased energy availability from decreased food intake or increased energy expenditure via increased physical activity. These states can be seen in patients with anorexia nervosa as well as female athletes, particularly in sports that value low body mass.13,14 Female patients with any form of RAD experience decreased gonadotropin-releasing hormone (GnRH) secretion causing decreased LH and oestrogen levels.15 Patients with anorexia nervosa in particular also experience decreases in dehydroepiandrosterone, testosterone, and insulin-like growth factor (IGF-1) as well as an increase in cortisol.14 These patients have low BMD and also a rapid decline in BMD, faster even than postmenopausal women, and are at an increased risk for fractures. Like postmenopausal women, they have low oestrogen, but patients with anorexia nervosa also have a variety of other hormonal imbalances that may influence their low BMD.

A common and under-recognised condition, the female athlete triad is comprised of decreased energy intake, functional hypothalamic amenorrhea, and decreased bone density.13 Like anorexia nervosa, decreased energy intake is likely the initiating factor, followed by hypothalamic suppression, and eventually decreased BMD. The combination of decreased energy and low oestrogen is thought to be responsible for the low BMD, though decreases in IGF-1 and leptin may also play a role.13,16 While the energy intake restriction is often not as severe as in anorexia nervosa, the imbalance between energy intake and output in these female athletes is enough to suppress the hypothalamus. Physical activity is usually thought of as beneficial to bone health, but in the female athlete triad too much activity can instigate and maintain bone fractures and low BMD. However, increased exercise even among amenorrhoeic athletes is associated with increased bone size, suggesting some protection against fracture.13 The bones of amenorrhoeic athletes have a thinner cortical layer though, suggesting poor mineralisation, and thus weaker bone than that of eumenorrheic athletes. Type of activity influences BMD as well, with athletes participating in high-impact sports such as volleyball and soccer having no difference in BMD based on menstrual status, while athletes in low-impact sports such as swimming have decreased BMD if they are oligo/amenorrhoeic. Therefore, weight-bearing or resistance exercise may be of benefit in improving or retaining BMD.13,14 The key, however, is to combine the bone-improving effects of physical activity with an internal environment most conducive to the formation and maintenance of healthy bone. To many, the essential component of that environment is oestrogen with its apoptotic effect on osteoclasts, thereby improving the osteoblast to osteoclast ratio.

A popular treatment for individuals with RAD or otherwise abnormal menses is use of oral contraceptives (OCP).14,17 However, a consensus on the effects of OCP on bone health does not exist, with some studies finding an increase in BMD and others finding no effect.13,18-20 A 2017 meta-analysis found no evidence to support use of hormonal therapy to improve bone health in this population, with a weighted mean difference of 0.02 g/ cm2 between total body BMD among patients receiving hormonal therapy and controls.21 Likewise, the effect of treatment with oestrogen or androgens in women with RAD also appears unclear, while use of recombinant IGF-1, recombinant leptin, teriparatide, and denosumab requires more investigation.13 In fact, high doses of oestrogen may inhibit secretion of IGF-1 and testosterone, which may decrease BMD.14,15 The best treatment to increase bone density in patients with RAD appears to be increased caloric intake with associated weight gain and resumption of menses.13,15,22 While resumption of menses would indicate increased oestrogen, replacement of oestrogen alone does not correlate with increased BMD. Whereas in postmenopausal women, exogenous oestrogens are able to improve bone mass, the benefits among RAD patients are debatable.15 This suggests another player in the genesis of decreased BMD in these patients. That player may be inflammation.

Inflammation
Like oestrogen deficiency, increased levels of glucocorticoids are associated with increased risk of osteoporosis. Glucocorticoids inhibit periosteal cell proliferation, decreasing the number of osteoblasts and thus inhibiting bone formation.23,24 Increased urinary free cortisol excretion in healthy young women is associated with decreased BMD.25 Patients with RAD, including that induced by exercise and anorexia nervosa, have elevated cortisol levels.26,27 High levels of cortisol are associated with decreased LH secretion among amenorrhoeicexercising women as compared with eumenorrheic women, as well as with increased markers of bone resorption and decreased markers of bone formation.28 Inflammation is directly linked to cortisol as high levels of inflammatory cytokines cause a rise in adrenocorticotropic hormone (ACTH) and cortisol.29 Patients with anorexia nervosa have increased levels of inflammatory cytokines, particularly tumour necrosis factor (TNF)-alpha, IL-1β, and IL-6.30 States of high inflammation, such as autoimmune disorders, are associated with increased bone loss.3 It is possible that the inflammatory state in RAD patients is induced by oestrogen deficiency, as can be seen with increased levels of pro-inflammatory cytokines in postmenopausal women.1 However, that the low BMD remains even when oestrogen is replaced in RAD patients argues against this and suggests that another factor induces the inflammation. In general, exercise appears to reduce markers of inflammation in several populations.31,32 However, in highly-trained athletes cortisol levels are often mildly elevated, as are levels of the pro-inflammatory cytokine IL-6, which in turn increases levels of ACTH and cortisol, resulting in a vicious cycle of increased inflammation and cortisol production.24 IL-6 stimulates development of osteoclasts, thereby directly contributing to decreased BMD. In fact, elevated cortisol levels, as are found in both exercise- and anorexia nervosa-induced RAD, may be the initiating factor of the condition. Corticotropin-releasing hormone, the upstream hormone in the pathway containing cortisol and ACTH, suppresses the release of GnRH and consequently of LH, FSH, and oestrogen.24

Leptin
Another possible mediator of decreased BMD in RAD patients is leptin. Produced primarily by adipocytes, leptin affects food intake, with other roles currently under investigation. Leptin levels reflect the amount of energy stored in fat, and decreased energy availability leads to decreased leptin levels.33 Leptin levels alone do not correlate with BMD and thus may influence bone density indirectly.34 In a randomised controlled trial of patients with hypothalamic amenorrhea, administration of recombinant leptin resulted in resumption of menses, increased oestradiol and progesterone levels, and increased osteocalcin, a marker of bone formation, although there was no difference between treatment groups in BMD.33 Another study found treatment with recombinant leptin decreased RANKL and increased osteoprotegerin levels.34

When discussing improvement of BMD and prevention of osteoporosis, replacement of oestrogen should be part of the conversation for women who are postmenopausal, or have Turner or Kallmann syndromes. If a patient’s reproductive axis is suppressed due to an external cause, however, the current research does not support use of exogenous oestrogens, or indeed any pharmacologic therapy, for the restoration of BMD. Instead, addressing the underlying cause, increasing caloric intake and resumption of menses appears to be the current gold standard. This discrepancy between treatments and results in different oestrogen-deficient states suggests that oestrogen alone is not the cause of the decreased BMD in patients with suppressed reproductive axis. Strong contenders for other potential mediators include cortisol and a general state of inflammation, as well as leptin. Further study is needed to more clearly define the cause of decreased BMD in patients whose reproductive axis is suppressed.