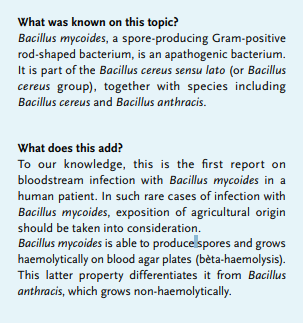 In this case report, we present a rare bloodstream infection: Bacillus mycoides, a spore-producing apathogenic agriculture bacterium.
Medical investigation in the field is not common practice in the Netherlands in cases of unexpected or rare pathogens, except for environmental assessment and source investigation by the municipal health service and the Dutch National Institute for Public Health and Environment (RIVM) in cases of tuberculosis, legionellosis and Q-fever.1-3

A 65-year-old male was admitted to the Intensive Care Unit (ICU), after an out-of-hospital cardiac arrest. Medical history revealed hypertension, cutaneous lupus erythematodes, chronic hyponatremia and Waldenström disease. Known prescribed medications were clobetasol balm, dabigatran, hydroxychloroquine, hydroxocobalamin injections, lercanidipine, lisinopril and pantoprazole. He was not recently treated with systemic immunomodulatory medication. He had not responded to the invitation for the annual Influenza vaccination.
He had been coughing for several days, when a friend found him in a dyspnoeic state inside the cabin of his barge. He had not been in contact with the water. When ambulance personnel arrived, he succumbed and they had to resuscitate him inside the cabin because of pulseless electrical activity. Struggling to accomplish intravenous access, they placed an intra-osseous needle (ION). Return of spontaneous circulation was gained after 20 minutes. On presentation at the Emergency Department, his blood pressure was 146/83 mmHg, his heart rate 103 beats/minute, his oxygen saturation 98% on mechanical ventilation with fraction of inspired oxygen 35%, and his temperature 37.7 °C. Central venous and arterial lines were placed and the ION was removed. Electrocardiogram and cardiac ultrasound did not show signs of myocardial ischemia or pulmonary emboli. Chest X-ray showed redistribution and pleural effusion suspect for pulmonary oedema, and no clear signs of pneumonia. Since the patient developed pulseless electrical activity while in a dyspnoeic state, we assumed he had suffered from a hypoxic cardiac arrest. 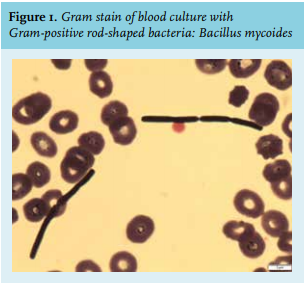 He was admitted to the ICU for post-resuscitation therapeutic thermoregulation. Influenza A virus testing proved positive and treatment with oseltamivir was initiated. He gradually regained consciousness and was extubated at day four. That same day, to our surprise, four different blood cultures taken at time of admission proved positive for spore-producing Gram-positive rod-shaped bacteria. There were no clinical signs of bacteraemia: temperature was normal, circulation stable without support, and laboratory results showed declining leukocyte counts and C-reactive protein. Considering Clostridium, we started treatment with penicillin. To exclude and treat possible indwelling catheter infection, we removed the central venous lines and replaced the arterial line under penicillin treatment. Cultures of these lines remained negative. At day five, Bacillus mycoides were identified by matrix-assisted laser desorption/ionization (MALDI-TOF) (figure 1). Growth on blood agar plates showed haemolysis. Despite being known as an apathogenic bacterium, we chose to treat this Bacillus because of the bloodstream infection and switched antibiotic treatment to vancomycin because of penicillin resistance. We excluded any endogenous infection focus with CT scan of the thorax/ abdomen. Blood cultures taken at day six and seven remained negative, as were sputum cultures throughout admission. Our patient recovered well, though still suffering the sequelae of postanoxic encephalopathy. He was discharged from the ICU at day seven.

In order to understand the cause of events which led to this unexpected and uncommon bloodstream infection, we had to investigate the origin of this case of Bacillus mycoides. The Bacillus cereus sensulato (or Bacillus cereus group) is comprised of eight different Gram-positive species: Bacillus cereus sensu stricto, Bacillus thuringiensis, Bacillus weihenstephanensis, Bacillus mycoides, Bacillus pseudomycoides, Bacillus cytotoxicus, and Bacillus anthracis. They have the ability to express a number of enterotoxins and as spore-formers, they can present an increased risk to food safety since spores may survive food-processing controls such as pasteurisation. Bacillus cereus is among the most important enterotoxigenic foodborne pathogens, generally causing either emetic or diarrheal symptoms.4 Though isolated and uncomplicated in the majority of cases, it is increasingly being reported to be a cause of serious and potentially fatal non-gastrointestinal tract infections, such as endocarditis, osteomyelitis, and severe cutaneous infections.5 The other well-known pathogen species from this group is Bacillus anthracis, the etiological agent for anthrax.6

We concentrated on the agricultural origin of Bacillus mycoides. Our patient was not a gardener; he did not work with plants, compost, or manure other than the freights of his barge. Since he had been transporting agricultural freights for years (wheat, corn, and residual waste of palm/ turnip/soy meant for cattle feeding), it is likely that Bacillus species like subtilis and mycoides and their spores entered the barge, either as natural component of soil and plant roots, or as part of compost or pesticides.
The bacteria and their spores then colonised the skin of our patient. During resuscitation, the bacteria or their spores were introduced transdermally into the bloodstream through placement of either the ION or the venous and arterial lines. In order to test this hypothesis, we were granted permission to take culture samples from the hold and the water supply system of the barge (figure 3). Although subsequent cultures did not show Bacillus mycoides, we did find multiple other Bacillus species, in particular, subtilis and even cereus (table 1). Routine surveillance cultures of the patient’s skin and throat did not grow Bacillus. However, because Bacillus mycoides is a spore-producing bacterium, the infection could also have originated from just the spores present on the ship and the patient’s skin.

To our knowledge, this is the first report on bloodstream infection with Bacillus mycoides in a human patient. It seems likely that colonisation and subsequent transdermal bloodstream infection (with either the bacterium itself or its spores) originated from the ship’s holds and freights. In such rare cases of infection with Bacillus mycoides, exposition of agricultural origin should be taken into consideration. Medical investigation in the field (patient homes, companies, public places) can contribute to the diagnostic process.