Answer to Photo Quiz: A woman with a purplish-red skin lesion on the neck 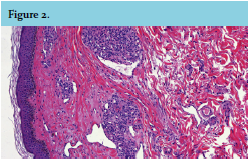 We suspected a vascular malformation, with Kaposi sarcoma, angiosarcoma or haemangioma as our differential diagnosis. Histopathological examination revealed scattered multiple ‘cannonball-like’ lobules of closely packed capillaries without atypical endothelium. In the periphery characteristic crescent-shaped thin-walled vessels were present (figure 2). Immunohistochemical staining for HHV-8 was negative, ruling out Kaposi sarcoma. These findings led us to the diagnosis of tufted angioma (TA). The patient did not want any treatment, because of the asymptomatic and benign nature of the skin lesion. After another follow-up of one year the lesion remained unchanged.
TA predominantly affects children, but can also rarely manifest in adulthood as reported in this case. More than 200 cases of TA, both congenital and late-onset cases, have been reported. In approximately 50% of these cases, TA is present within the first year of life and around 15% of the cases are present at birth.1 One series of 41 cases reports that 34% of patients with TA were >10 years. All studies report that both sexes are equally affected.2
The lesions are predominantly located on the upper part of the trunk, neck or proximal extremities. The face or scalp can also be affected. It clinically presents with erythematous or purple macules, papules or plaques and is usually asymptomatic but can be painful, and in some cases hyperhidrosis and hypertrichosis are described.1
The differential diagnosis of TA comprises vascular lesions including infantile haemangiomas, congenital haemangiomas, vascular malformations and in acquired cases capillary haemangioma, Kaposiform haemangioendothelioma and (malignant) neoplasms such as Kaposi sarcoma and angiosarcoma. Congenital TA can be associated with Kasabach-Merritt syndrome, a life-threatening complication, characterised by profound thrombocytopenia and consumption coagulopathy.
Tufted angioma may persist unchanged but also spontaneous regression has been described, after six months to two years.3 It is a benign disorder and treatment is generally not needed. Several options such as surgical excision, cryosurgery, systemic steroid therapy, intralesional steroid injection, propranolol, interferon alpha therapy, radiotherapy and pulse dye laser have been proposed with different clinical outcomes.4,5
The exact causes of TA have not yet been established, however some suggestions towards the role of immune suppression and the development of TA have been described.4 One case of acquired TA occurred five years after renal transplantation. In one patient TA occurred after liver allograft transplantation and also a patient with Crohn’s disease receiving immunosuppressive therapy has been described. We report similar findings in our case with adult onset development of a slowly increased and persistent TA in a patient on immunosuppressive therapy. However, no definitive conclusions can be made yet based on these few reports.

Tufted angioma has to be included in the differential diagnosis of congenital and acquired vascular disorders in both children and adults.