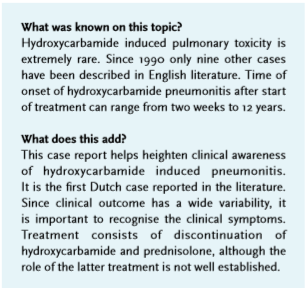 Hydroxycarbamide is well absorbed after oral administration, converted to a free radical nitroxide, and transported by diffusion into cells where it inhibits DNA synthesis by inactivating ribonucleotide reductase, resulting in cell death in S phase.1 Hydroxycarbamide is widely used in myeloproliferative neoplasms. Although there have been concerns about the mutagenic and leukemogenic potential of the drug, the risk of development of myeloid malignancies is considered to be lower than with other cytostatic drugs.2 Side effects include pancytopenia, gastrointestinal discomfort and sometimes chronic mucocutaneous ulcers. We describe a patient who developed life threatening respiratory failure with admission to intensive care unit occurring within three weeks after having been started on hydroxycarbamide.

A 66-year-old man with metastasized prostate cancer and myeloproliferative neoplasia (MPN), was admitted to the hospital because of fever. His medical history included appendectomy and prostatectomy for prostate cancer and superficial thrombophlebitis. Five years before admission JAK-2 (50%) MPN was diagnosed based on a platelet count of 465 x 109/l (RW 150-400), elevated haematocrit of 0.51% (RW 0.40-0.50) and normal leucocyte count. Bone marrow biopsy revealed morphological features compatible with Polycythaemia Vera (PV). Treatment for the prostate cancer consisted of bicalutamide and gosereline.
Because his age of 61 was the only vascular risk factor at the time, he was treated with acetylsalicylate (100 mg/ day) and repeated phlebotomies and the initiation of cytoreductive therapy was postponed.
With this treatment haematocrit declined, but platelet counts gradually increased. Because of urinary obstruction a transurethral resection of the bladder neck was planned. In view of the increased risk of postoperative thrombosis due to the combination of hormonal treatment for metastatic prostate cancer, previous thrombophlebitis and JAK-2 driven thrombocytosis (700 x 109/l) pre-operative cytoreduction with hydroxycarbamide (500 mg daily) was started.
Nineteen days later he developed a fever and the urologist initiated treatment with ciprofloxacin 500 mg twice a day. Three days later he presented with persistent high fever and was admitted to the urology department and treated with amoxicillin/clavulanate (3 x 1200 mg) in combination with a one-time gift of tobramycin 5 mg/kg.
Next day he complained of dyspnea and fine bilateral pulmonary crackles were heard. The oxygen saturation was 84% (normal > 96%) on breathing room air. Arterial blood gas analysis, on oxygen supply, showed respiratory alkalosis with hypoxemia (pH 7.534; pO2 7.4 kPa; pCO2 4.0 kPa; base excess 2.7 mmol/l; bicarbonate 26.7 mmol/l; O2 saturation 92.1%).
Chest X-ray showed an increase of interstitial fluid (opacity), fluid in fissures and minimal pleural fluid. He received oxygen and furosemide 40 mg intravenously and was admitted to intensive care where he was put on high flow nasal cannula therapy.
Despite a regimen of broad spectrum antibiotics, fever persisted. Cultures from blood, sputum and urine showed no pathogenic microorganisms and urine testing for Legionella pneumophila and Streptococcus pneumoniae was negative. A polymerase chain reaction (PCR) of a throat swab was negative for Influenza A and B and respiratory syncytial virus (RSV), and there was no serological proof for Chlamydophila pneumoniae, Chlamydophila psittaci, Legionella pneumophila, Mycoplasma pneumoniae and HIV 1/2. Because of lack of clinical improvement after four days antibiotic treatment was discontinued.
Computed tomography (CT) of the chest revealed extensive multifocal consolidations with ground-glass, bilateral hilar lymphadenopathy and pleural effusion. Examination of fluid obtained by bronchoalveolar lavage fluid showed 40% macrophages, 20.0% neutrophils without malignant cells. Cultures for bacteria, fungi and M. Tuberculosis were negative.
Hydroxycarbamide was discontinued and treatment with prednisolone was started in the dosage of 40 mg/day, within two days resulting in rapid clinical improvement. Patient was discharged from hospital one week later in good clinical condition and prednisolone was tapered and stopped after two weeks treatment. A CT scan performed one month after discharge showed significant improvement (figure 1).

We describe a patient with life threatening respiratory failure. No pulmonary pathogens were demonstrated and despite broad spectrum antibiotics his condition deteriorated. There was a dramatic clinical improvement after discontinuation of hydroxycarbamide and treatment with prednisolone. The clinical course in combination with the radiologic findings is compatible with a drug-induced pneumonitis. Antineoplastic drugs such as busulfan, bleomycine, chlorambucil, cyclophosphamide, cytosine arabinoside, melphalan, methotrexate, mitomycin and procarbazine have been associated with severe pulmonary toxicity.3,4 Hydroxycarbamide induced pulmonary toxicity is rare as only nine other cases have been described in the English literature (table 1) since 1990. Time of onset of hydroxycarbamide associated pneumonitis after initiation of treatment is highly variable, ranging from two weeks5 to 12 years.6 In this patient the respiratory symptoms occurred on the twentieth day after the start of the treatment.
The severity of the clinical symptoms reported is variable. Treatment is not established. Three out of nine patients recovered upon withdrawal of hydroxycarbamide alone. The other six were treated with corticosteroids in dosages ranging from 40 mg to 1000 mg, as in our patient.5 Most patients recovered, one patient died.
Drug-induced pneumonitis is a diagnosis per exclusionem. A drug lymphocyte stimulation test (DLST) has been introduced as a diagnostic test but its specificity is limited, since a DLST often yields false-positive results.7 Since the severity of the side effect a rechallenge is not mandantory.
We would like to emphasize that, despite the common assumption that the use of hydroxycarbamide is relatively safe, patients can develop a severe pneumonitis with detrimental outcome and that hydroxycarbamide should be considered a causative agent in the differential diagnosis of pneumonitis. 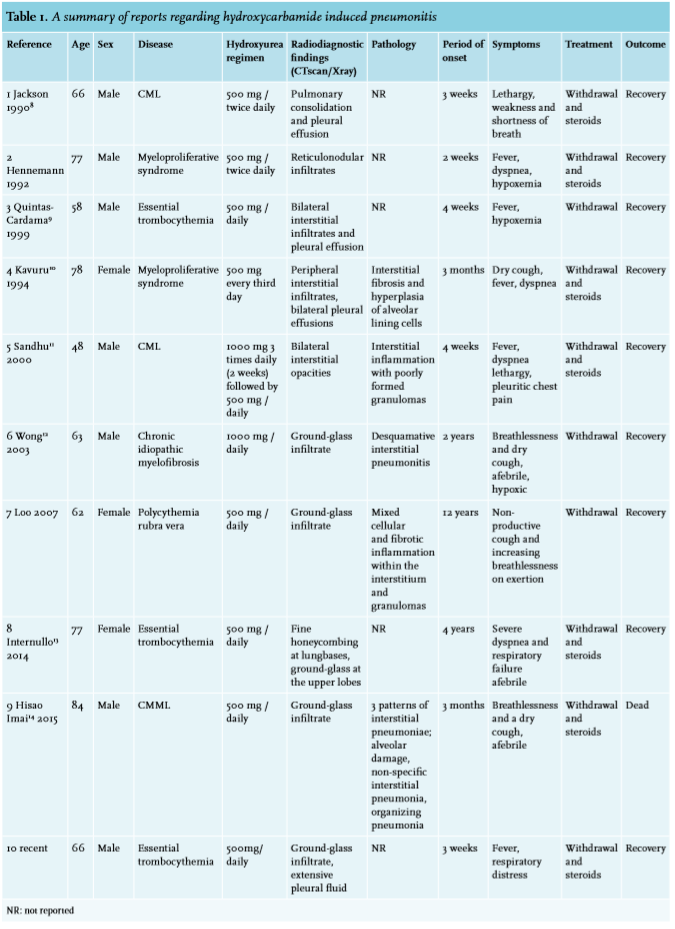