Traumatic tracheal intubation: An uncommon cause of acute airway obstruction 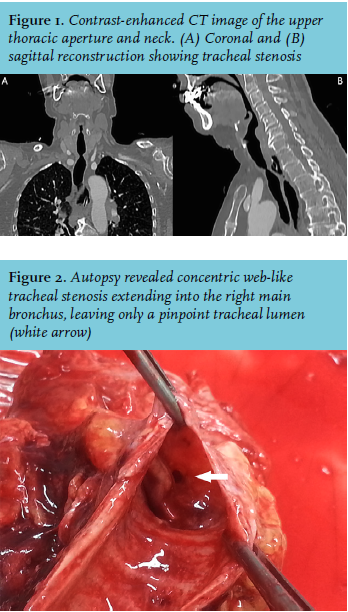 A 75-year-old woman was referred to our intensive care unit (ICU) with acute upper airway obstruction. Three months prior to admission, she was admitted to a foreign hospital following neurotrauma with a subdural haematoma, for which craniotomy was performed. She underwent tracheal intubation and prolonged mechanical ventilation for three weeks, and was transferred to our hospital four weeks later. After two months of revalidation, she was admitted to our ICU with subacute signs of airway obstruction, including dyspnoea on exertion and inspiratory stridor. Clinical symptoms temporarily improved with aerosol therapy and non-invasive ventilation. Initial evaluation for the diagnosis of upper airway obstruction included a thoracic CT scan (figure 1). On day 5, before further evaluations could be conducted, acute upper airway obstruction recurred. Endotracheal intubation and emergency tracheostomy were unsuccessful because the tube could not be advanced beyond the stenosis; hypoxia developed, which necessitated cardiopulmonary resuscitation. Our patient failed to stabilise because of continuous respiratory deterioration, and therapy was terminated. Autopsy was performed (figure 2).