What can smudge the ‘tough body’ corpus callosum?

A 57-year-old lady was admitted acutely to the ICU with progressive confusion and seizures. She had a prolonged history of alcohol excess, complicated by chronic pancreatitis. She was managed symptomatically and received high-dose thiamine supplementation.
Magnetic resonance imaging (MRI) of the brain showed oedema at the left parieto-occipital lobe (figure 1), a rounded lesion in the splenium of the corpus callosum (figure 2A) and periventricular white matter changes (figure 2B). She improved spontaneously. Repeat MRI brain, two weeks after presentation, showed complete resolution of the previously noted oedema at the left parieto-occipital lobe, but the persistence of the corpus callosum lesion and the periventricular white matter changes.
One year later, she represented with complaints of missing and hitting objects on the right side of her visual field, as well as memory loss and unsteady gait. Repeat MRI brain showed the persistence of the previous changes in addition to corpus callosum atrophy. 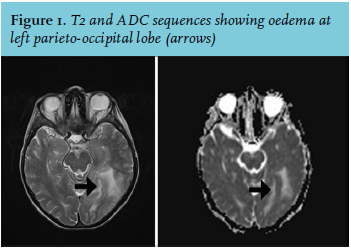 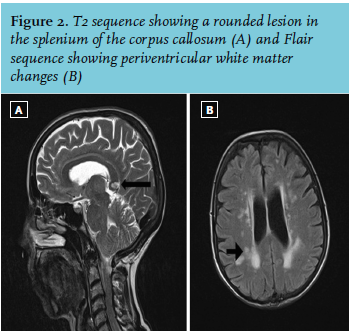 WHAT IS THE MOST LIKELY DIAGNOSIS?