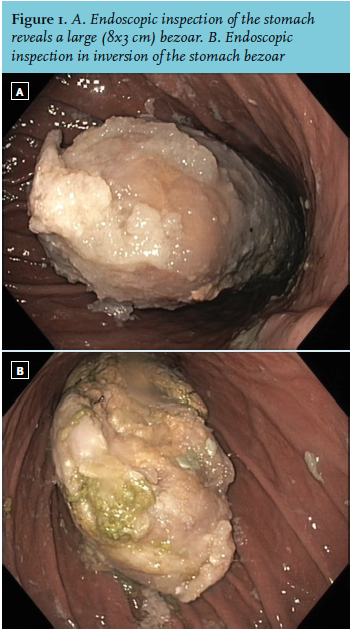 
A 63-year-old woman with stage-IV adenocarcinoma of the lung, treated with chemo-radiotherapy, was admitted because of persistent vomiting for several weeks, without fever, abdominal pain or a change in bowel habits. She was fed through an enteral feeding tube because of radiation oesophagitis. Her medication list included oramorph, fentanyl (transdermal), esomeprazole, sucralfate, and ondansetron. Besides minor signs of dehydration, no other gross abnormalities were found upon physical examination. Blood analysis revealed an increased C-reactive protein of 71 mg/l, but normal electrolyte levels and renal function. A MRI cerebrum was performed, which showed no signs of cerebral metastases. Next, a gastroscopy was performed (figure 1).