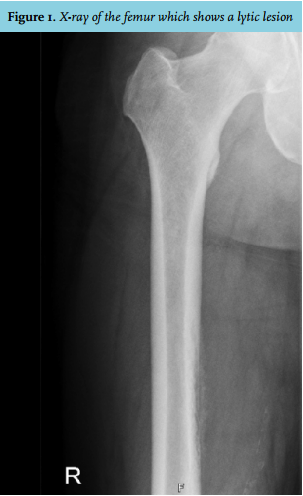 A 57-year-old man was admitted because of progressive pain in his right upper leg. His medical history was unremarkable except for hypertension and excessive alcohol use of six units per day. He did not report any recent infection, fever, drug abuse, trauma, surgery or dental procedure. On physical examination he had normal vital signs and no endocarditis stigmata were found. His right upper leg showed a diffuse painful swelling on the medial side.
An X-ray of the femur showed a lytic lesion of the diaphyseal femoral cortical bone (figure 1). Magnetic or, although less likely, primary osteosarcoma or Ewing sarcoma. Computed tomography of the chest and abdomen was unremarkable. Laboratory results revealed a C-reactive protein (CRP) of 110 mg/l (normal value < 10) and leucocytes of 9.9 x 109/l (normal value: < 10). A monoclonal protein (M-protein) was not present. The liver synthesis function, measured by serum bilirubin, PT-INR, APTT and albumin, was normal, as were renal function and the electrolytes including calcium.
On the fifth day of admission the patient developed a spontaneous femur fracture. From that moment on he developed fever and deteriorated. Blood cultures were taken and antibiotic treatment, consisting of amoxicillin-clavulanate and tobramycin, was started. In consultation with the National Committee of Bone Tumours a surgical bone biopsy was performed. The original plan was to apply external fixation after the biopsy; however, it had to be postponed due to haemodynamic instability during surgery. Despite the clinical suspicion of a bone malignancy, the biopsy solely showed signs of inflammation. Cultures of the bone biopsy as well as blood cultures yielded the Streptococcus anginosus group (specified as Streptococcus intermedius). The antibiotic treatment was changed to penicillin G and clindamycin. Transthoracic as well as transoesophageal echocardiography did not show any signs of endocarditis. The dental surgeon did not find a focus of infection in the oral cavity. The patient developed severe septic shock with multiple organ failure consisting of acute respiratory distress syndrome, acute renal failure and disseminated intravascular coagulation. A second surgical bone biopsy was taken and the external fixator was now placed. Histological analysis was inconclusive, but showed necrosis, bone renewal and cells suspected for epithelial tumour cells with nuclear atypia, highly suspicious for carcinoma. Unfortunately, in spite of the treatment given, the patient died a few days later. Post-mortem examination of the patient confirmed the diagnosis of osteomyelitis in the right femur. Malignancy was not found in the femur or anywhere else. The liver showed signs of cirrhosis. 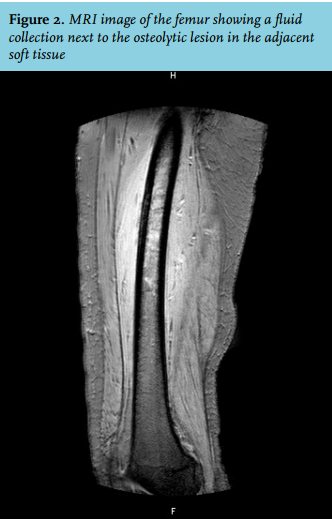 In this case, as in many other cases with osteolytic lesions or pathological fractures, the suspicion of a metastatic bone disease was initially high. Differential diagnosis at that point also consisted of osteomyelitis and, although less likely, a primary bone tumour. Even though computed tomography did not show a primary tumour, we still considered metastatic bone disease to be the most likely diagnosis, since it is not uncommon that computed tomography does not reveal the primary tumour. However, during the first operation, a smelly substance was found and these cultures yielded S. intermedius. Of course, our differential diagnosis changed considering osteomyelitis in the first place followed by a malignant lesion with a secondary infection.
The differential diagnosis concerning pathological fractures is actually very broad and includes osteoporosis, neoplastic metastatic disease, primary bone tumours, multiple myeloma, hyperparathyroidism, Paget’s disease, renal osteodystrophy and osteomyelitis. The initial work-up should at least consist of radiological imaging and laboratory studies on complete blood count, CRP, creatinine, calcium, albumin, alkaline phosphatase and M-protein. MRI is considered the golden standard for diagnosis, which should be followed by bone biopsy for culture to guide optimal antibiotic treatment as well as for histological analysis to rule out other diseases.
Tubular pathological fractures due to acute osteomyelitis in adults are rare.1-4 Osteomyelitis is an infection which leads to progressive bone destruction and can be due to contiguous spread from adjacent soft tissue or joints, haematogenous spread or direct inoculation of microorganisms after trauma or surgery. Osteomyelitis is often accompanied by local pain and swelling, but general symptoms such as fever can be absent. Unlike acute osteomyelitis in children, were there is a predilection for tubular bones of the arms and legs, osteomyelitis in adults mainly occurs in the mandible or maxilla due to contiguous spread in the oral cavity and in the vertebrae, sternoclavicular joint, sacroiliac joint and symphysis pubis due to haematogenous spread. In case of haematogenous spread, the infection is usually monobacterial, whereas in contiguous spread or direct inoculation of microorganisms the infection is often polymicrobial. Staphylococcus aureus, coagulase negative staphylococci and Gram-negative bacilli are the most commonly encountered pathogens. In children most cases are due to S. aureus, group B beta-haemolytic Streptococcus, Streptococcus pyogenes and Streptococcus pneumoniae. 5,6
The S. anginosus group is a group of organisms which includes S. intermedius, S. anginosus and S. constellatus. 7S. anginosus group was formerly known as Streptococcus milleri, a name still widely used. These organisms are part of the normal flora of the human oral cavity and upper part of the respiratory tract, the gastrointestinal tract and the vagina. They have the ability to cause systemic infections such as endocarditis, gastrointestinal and genitourinary tract infections, and have the propensity to form abscesses in different organs, for example cerebral and intra-abdominal abscesses.8-10 The S. anginosus group rarely causes infections in otherwise healthy individuals in the absence of trauma.11 Bacteraemia is often associated with an identifiable source of infection, profound neutropenia, abdominal or dental surgery.8,11
The S. anginosus group is an uncommon causal agent of osteomyelitis.9 It has only been reported in a few case reports.8-10 Spontaneous fracture due to osteomyelitis caused by the S. anginosus group has been reported once, also concerning the femur.12
The initial treatment for osteomyelitis with unknown causative pathogen should consist of broad-spectrum antibiotics with good tissue penetration combined, especially in chronic osteomyelitis, with surgical interventions such as adequate drainage and debridement of all infected tissue, and bone stabilisation. Osteomyelitis can be complicated by sequestration, sinus formation or sepsis.
Specific treatment for the S. anginosus group should consist of antibiotics such as penicillin or third-generation cephalosporins occasionally followed by surgical debridement. The use of fluoroquinolones and macrolides should be avoided as empirical therapy because of increasing resistance for these antibiotics.13-15 As with many other infectious diseases, due to a lack of prospective randomised controlled studies and the heterogeneity of the disease, the optimal duration of antibiotic treatment is unknown. Although guidelines concerning osteomyelitis in adults are currently not available, antibiotic treatment for at least 4-6 weeks is generally recommended.

The above-described case is extraordinary, as the patient did not have any known risk factors for osteomyelitis, such as recent trauma, medical interventions, diabetes mellitus, intravenous drug abuse or endocarditis. Although the post-mortem examination revealed cirrhosis of the liver, the synthesis function of the liver was still intact on admission. Moreover, liver cirrhosis is not recognised as a risk factor for the development of S. anginosus group infections. Osteomyelitis caused by the S. anginosus group is rare and occurs particularly in the mandible, maxilla or the vertebrae.8 A spontaneous fracture of the femur due to acute osteomyelitis caused by the S. anginosus group has only been reported once. In the case of a pathological fracture, one should consider the broad differential diagnosis, including osteomyelitis which should lead to a laboratory work-up and imaging studies. When considering biopsy for histological analysis, do not forget to perform a microbiological culture to look for osteomyelitis.

On behalf of all authors, the corresponding author states that there is no conflict of interest.