The ABCDE primary assessment in the emergency department in medically ill patients: an observational pilot study 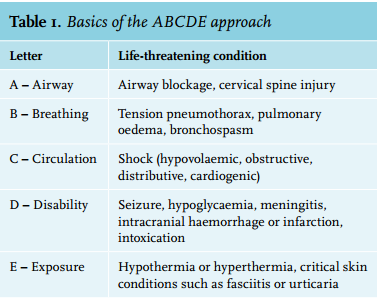 A structured approach is considered a hallmark of the initial care of specific medical emergencies. It facilitates optimal use of time and early recognition of deterioration, especially in the so-called ‘golden hour’ which is the first hour after onset of injury or illness when resuscitation could be most beneficial.1,2 This golden hour has been recognised in various emergencies such as trauma, stroke, sepsis and shock.3-5 The application of a structured approach has become standard in trauma. This approach for early recognition and treatment of life-threatening conditions in trauma has been trained in trauma courses for decades.5,6 Training of a systematic approach using the Airway Breathing Circulation Disability Exposure (ABCDE) primary assessment in other medical emergencies has increased during recent years, although solid evidence of the clinical benefits for patients using the ABCDE approach is lacking. Despite this lack of hard evidence, the Dutch Inspection for Healthcare (IGZ) requires that physicians treating patients in the emergency department are ABCDE trained.7 The scale of transfer to real practice and the extent of the application of a structured approach in the emergency department (do they actually apply what they have learned in training) is not exactly known. The basics of the ABCDE approach are shown in table 1. 8
We have completed an observational pilot study to register the use of the ABCDE approach in the emergency department (ED) in medically ill patients. We investigated whether triage code was associated with performing an ABCDE approach and why a doctor did not deem an ABCDE approach necessary.

An observational pilot study was conducted in the ED of a tertiary care university hospital with over 34,000 ED visits annually. During a seven-week period from August 2014 until October 2014 a convenience sample was obtained by screening all medical patients older than 18 years admitted to the ED for the internist or emergency physician between 08.00 and 17.00 hours from Monday to Friday on 30 random days. All staff and residents/interns in our ED, except medical students, had to successfully complete a two-day ABCDE course before they could treat patients in the ED. In the Netherlands, there are several of these ABCDE courses provided, consisting of lectures and practical hands-on sessions using simulation. If the attending physician planned to use the ABCDE approach, informed consent was obtained from the patient and physician to observe the procedure. The observer was able to observe/include only one patient at a time. Before assessing the patients, the treating physician was asked which approach he was going to use and the reasons for this specific approach, including reasons for not performing the ABCDE approach. Baseline data were registered including elapsed time until the start of the ABCDE approach, duration of the ABCDE approach, basic patient characteristics (triage code, reason for ED visit) and physician characteristics (physicians and residents were asked about their specialty, duration of current education and years of experience since graduation from medical school). The triage code was allocated by a trained triage nurse based on the main complaint, basic vital parameters and expected amount of resources needed, according to the Emergency Severity Index. This results in five triage codes: red meaning immediate resuscitation needed; orange almost immediate resuscitation needed (within ten minutes); yellow denotes a potentially ill patient with resuscitation needed within one hour, or two or more resources (investigations/diagnostics) needed; green no resuscitation needed but treatment within two hours and only one resource needed and finally blue no resources needed and treatment within four hours. Patients were divided into two groups based on their triage code: red, orange and yellow were grouped together as urgent or (potentially) unstable patients, green and blue as non-urgent or stable patients. Potentially unstable patients can have various serious conditions, for example sepsis, overdose or acute abdominal pain. The ABCDE approach was observed and its completeness was registered using an observational list (figure 1). Completeness scores were calculated by dividing the number of performed checklist items by the total number of checklist items (26) multiplied by 100, resulting in a possible score between 0 and 100. Data collection was performed by one investigator. The study was approved by our local Medical Ethics Committee.

Data analysis
Data were analysed using IBM SPSS version 22.0. A p-value less than 0.05 was considered statistically significant. Descriptive statistics were used. The Jonckheere-Terpstra test was used for the relation between triage code and time until the ABCDE approach. A Cochran-Armitage trend test and gamma association were used to describe the relation between the frequency with which ABCDE was used and the triage code. Fisher’s exact test compared the frequency of performed ABCDE approaches between the two different triage groups (potentially unstable or not potentially unstable). A Mann-Whitney U test was used to compare not normally distributed ABCDE scores between different groups. 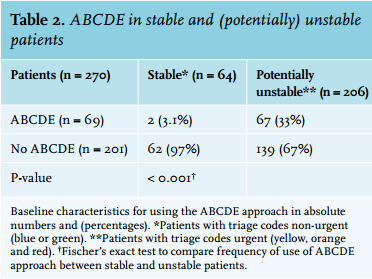 Limitations
An observational single-centre pilot study was conducted in a tertiary academic hospital. We performed a pilot study to gain insight into whether the ABCDE approach learned in a simulation-based training was applied in real practice. It is as yet unknown whether our results also apply to other EDs. We expect that in our region, the use and completeness of the ABCDE approach is lower in other EDs as we are a tertiary university hospital with multiple unstable patients presenting to our ED every day.
The physicians knew they were under observation and this may also lead to both more frequent use of the ABCDE approach and higher completeness scores in this study (the Hawthorne effect: research participants alter their behaviour when observed).10 It is possible that these scores are lower when they are not under observation and this Hawthorne effect may also partially explain the high percentage of ABCDE use in patients with the highest triage codes. Video recording is not allowed in our ED so we were not able to correct for this bias. We asked the physicians if they planned to use the ABCDE approach which may have positively influenced this number.
We only scored whether an item was performed but we did not register the quality of the ABCDE parameters or the following interventions and treatments. Although we conclude that junior doctors and staff have similar completeness scores it is possible that the actions and diagnosis after the ABCDE approach are different. In this study, it is possible that associations are not significant because of the small sample size. The checklist was developed and used by a single researcher. The Emergency Severity Index score is the triage system used in our hospital. We have chosen to group triage codes of red, orange and yellow together as potentially unstable. This might overestimate the number of patients who are labelled as potentially unstable but we believe this is the most practical cut-off value to screen for those in whom an ABCDE approach might be beneficial (high sensitivity). This study was not designed to register the clinical course of the patients in whom an ABCDE approach was omitted, so no conclusion can be made if the lack of an ABCDE approach negatively influenced patient outcome. It is currently not known if using the ABCDE approach improves patient care compared with only clinical judgment and experience. In many EDs in the Netherlands though, the treating physicians are young and inexperienced, especially during evenings and weekends. We hypothesise that the ABCDE approach might help them to improve recognition of life-threatening disease and early resuscitation. It is also not known if the potential benefits of the ABCDE approach are explained by more coordinated and intensified care or by the specific interventions itself. These are important issues to address in subsequent studies.

Our study shows that although the ABCDE primary assessment is performed more often and sooner in (potentially) unstable patients with more urgent triage codes, it was still not used in the majority (67%) of potentially unstable patients. When the ABCDE approach was used, it was performed efficiently (e.g. high completeness scores). The ABCDE approach is the preferred method, as stated by the government and several professional specialty organisations, for assessing an acutely ill patient but it seems not to be clear when to use it. Important factors determining not to use the ABCDE approach were: 1) using a short clinical impression of the patient instead, 2) stable vital signs recorded by the nurse, 3) the reason for visiting the ED suggests a stable patient and 4) the patient was first seen by a medical student who was not trained in the ABCDE approach. Currently it is not known if replacing the ABCDE approach by a short clinical impression (including only looking at a few vital signs recorded by the nurse) is a safe strategy to select patients in need for early resuscitation. Hospitals (and ABCDE courses) therefore should not only focus on teaching the content of the ABCDE itself, but also on the implementation of its use in every potentially unstable patient. More research is needed to determine whether performing the ABCDE approach indeed improves patient outcomes, since early treatment in various conditions begins with early recognition.