Intestinal dilatation: do not forget a tropical origin

A 70-year-old Surinamese man presented to the outpatient clinic with hiccups, burping and bloating after meals, lasting for 1-1.5 hours. His medical history revealed multiple myeloma for which bortezomib (and later lenalidomide) and 40 mg dexamethasone daily had been prescribed for five months. There was no history of travel to a tropical area over the past five years. Physical examination did not reveal any abnormalities. Laboratory findings were within normal ranges except for a pre-existing normocytic anaemia and mild thrombocytopenia. As part of the analysis, a chest X-ray was performed, showing signs of emphysematous lung disease. A gastroscopy revealed an antral gastritis (Helicobacter pylori positive) for which he was treated with a combination of amoxicillin, clarithromycin and pantoprazole (no biopsies were taken). After two weeks the hiccups were under control.
The patient returned within five months with progression of the hiccups. Our causal differential diagnosis included goitre, gastrointestinal disorders, toxic-metabolic abnormalities, drugs (such as dexamethasone), central nervous system disorders or an infectious origin. Thyroid function tests and cortisol levels were normal; dexamethasone was stopped. He was treated with ondansetron, haloperidol, baclofen and gabapentin without any relief. The eosinophil count had increased from 0.1 to 1.3 x 109/l (normal value ≤ 0.5 x 109/l) over 15 months. Due to progressive malaise, anorexia and nausea, a CT scan was performed showing dilatation of the stomach as far as the proximal jejunum (figure 1). Another gastroscopy revealed a haemorrhagic antral gastritis and duodenitis, and biopsies were taken (figure 2). 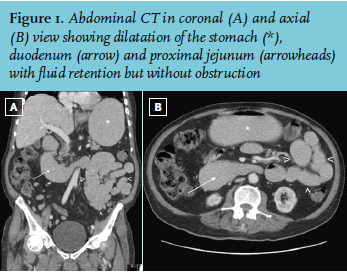 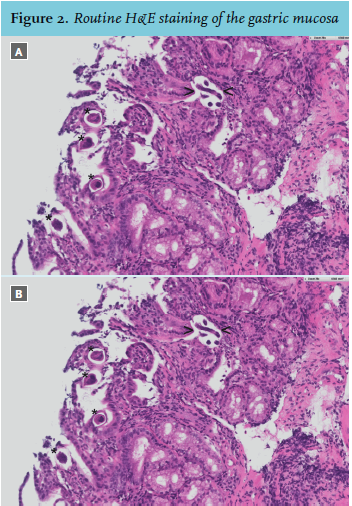