Oral anticoagulants are indicated for the prevention of stroke and systemic emboli in patients with atrial fibrillation (AF) or mechanical heart valves, and for the treatment and prevention of venous thromboembolism (VTE). For six decades vitamin K antagonists (VKA) were the only available oral anticoagulants.1,2 Although highly effective, VKA treatment has certain disadvantages, including the need for frequent INR monitoring and dose adjustments, a risk of bleeding and interactions with food and other drugs.3,4
Direct oral anticoagulants (DOACs) have been introduced as an effective and safe alternative for VKA treatment.5,6 DOACs offer a simplification of anticoagulant treatment due to their stable pharmacokinetic and pharmacodynamic profile, allowing for a fixed dose regimen. Furthermore, they are associated with a significant reduction in major bleeding events.6 Currently, four DOACs have been registered for the indications AF and VTE: the direct thrombin inhibitor dabigatran etexilate (hereafter dabigatran), and the direct factor Xa inhibitors rivaroxaban, apixaban and edoxaban.
In clinical practice, patients should be informed by their physician about both anticoagulant treatment options and their advantages and disadvantages. However, the final decision of which anticoagulant to prescribe is often made by the physician, following local guidelines and reimbursement restrictions.1,7 Patient preferences are not always considered or asked for. In a previous study in AF patients,8 the patient preferences about VKA and DOACs were investigated using a standardised questionnaire. In total 70% of patients would prefer a DOAC over a VKA when they were confronted with different scenarios highlighting the advantages of DOACs. The lack of need for laboratory control and, to a lesser extent, the lower risk of bleeding were considered the most important arguments for preferring DOACs by these patients.8
This study aims to investigate the preference of patients with a history of VTE for DOACs versus VKA using the same questionnaire. Furthermore, we explored possible predictors of treatment preference such as age, gender, treatment duration, and treatment satisfaction.

Study population
A random sample of 200 patients was obtained from patients treated with VKA for deep vein thrombosis (DVT) or pulmonary embolism (PE) at the Thrombosis Service of Amsterdam, the Netherlands. To enrich the sample with respect to experience with VKA at the Thrombosis Service, only patients who were treated for a minimum duration of two years were considered. Hence, the following inclusion criteria were used: 1) Treatment with any VKA, 2) Treatment duration of minimally two years, 3) Treatment indication DVT and/or PE. The survey was sent to the patients by post, together with a return envelope and a recommendation letter from the director of the Thrombosis Service. All patients received a reminder three weeks after the first survey.

Survey
Patient preference for DOACs relative to VKA was assessed using a treatment trade-off technique that was administered as a questionnaire. The treatment trade-off technique allows for a comparison of patients’ therapy preference between two different treatment options.9 The current trade-off consisted of four consecutive scenarios as was the case with the previous investigation in AF patients receiving VKA.8 In each scenario, one advantage of DOAC treatment was added to the comparison. For each scenario, the patient was asked to express their preference for treatment: stay on the current VKA treatment or switch to DOAC treatment.
In scenario 1, VKA and DOACs have the same efficacy and safety. The only difference between the two options is that there is no need for laboratory control with DOAC treatment. Scenario 1 is the baseline scenario. In scenario 2, a reduced risk of major bleeding with DOAC treatment is added. Scenario 3 adds the advantage of no interactions with food and other drugs. In scenario 4, it is stated that DOACs are more effective than VKA in prevention of recurrent venous thromboembolism (VTE). Patients could indicate for each scenario whether they would definitely or probably stay with their current VKA treatment, were neutral, or would definitely or probably change to a DOAC, on a scale from 1 to 5, respectively.

Statistical analysis
The target response rate of the survey was set at 70%, with a minimum of 50%. The data on treatment preference were analysed using the generalised estimating equations (GEE) method, with a logit link, binomial distribution and an unstructured correlation. GEE enables analysis of repeated measurements or other correlated observations (such as repeatedly assessed preference). It corrects for the fact that patients’ answers to each subsequent scenario are related to their answers in previous scenarios. Outcome measures of the GEE were odds ratios and 95% confidence intervals. We calculated 1) whether there was a significant difference in the proportion of patients preferring DOAC over the four scenarios and 2) whether any of the investigated variables were significant predictors for DOAC preference.
To prepare the data for analysis, the ‘preference for DOAC’ outcome variable was dichotomised. A preference for DOACs was assigned a score of 1, and a neutral preference or preference for VKA was assigned a score of 0. Furthermore, the variable ‘educational level’ was dichotomised into ‘higher education’, including university, higher professional education, and preparatory scientific education, and ‘lower education’, including all other forms of education. The variable ‘patient age’ was analysed as a continuous variable and as a dichotomised variable separated by the sample median age. The variable ‘treatment duration’ was categorised into short VKA treatment duration (< 6 years), intermediate treatment duration (6-10 years) and long treatment duration (> 10 years) groups.
First, we evaluated the change in the percentage of patients that would switch to DOACs over the four scenarios. Second, we investigated whether several variables, such as age, gender, treatment duration, type of VKA, educational level and treatment satisfaction were associated with a preference for DOACs using the GEE method. If a variable turned out to have a significant influence on DOAC preference, the Chi-square test was used to evaluate differences between the variables’ categories for each scenario. The significance level was set at p < 0.05.

Response and study population
The random sample of 200 patients treated with VKA for the indication of DVT or PE who received the survey by post had a mean age of 71 years, 47% were male, and the mean VKA treatment duration was 18 years. The survey was initially sent on 16 June 2015 and a reminder was sent three weeks later.
In total, 136 of those 200 patients responded with a completed survey, hence a response rate of 68%. One patient was excluded because of current rivaroxaban use, leaving 135 patients treated with VKA for inclusion in the present analysis (figure 1). Baseline characteristics of the study population are shown in table 1. The average age was 70 years (SD ± 12) and 45% of the respondents were male. The mean treatment duration was 20 years (SD ± 10), and 25% of the respondents were treated for a previous PE, 38% for a past DVT, 22% for both and 13% for previous PE or DVT with an additional indication (i.e. mechanical heart valve, atrial fibrillation). Almost 87% of the patients were (completely) satisfied with their current VKA treatment. There were missing data for three of the investigated variables. Data on type of VKA were missing in one patient, data on indication for VKA treatment were missing in four patients and data on treatment satisfaction were missing in two patients (figure 1). 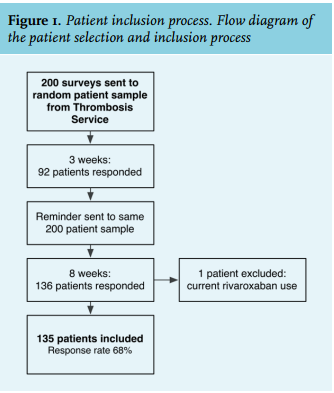 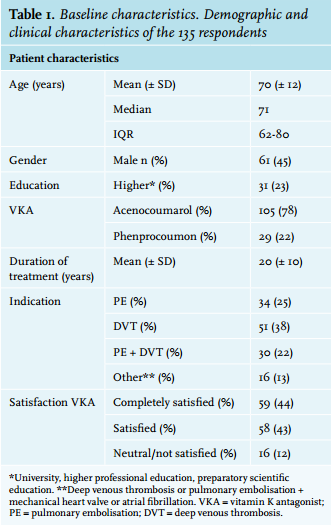 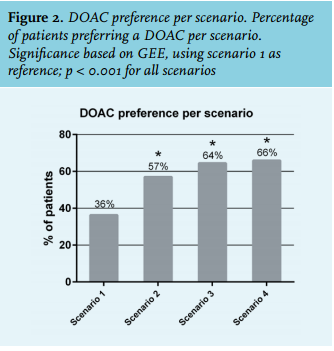 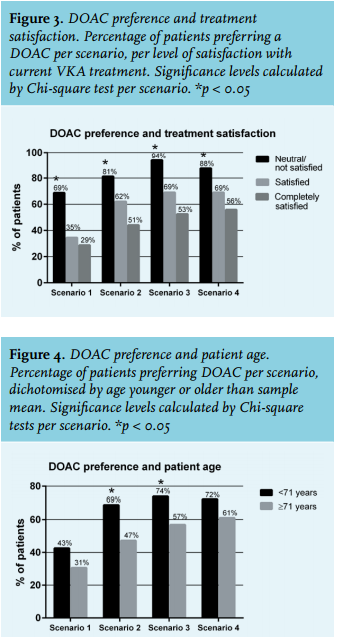 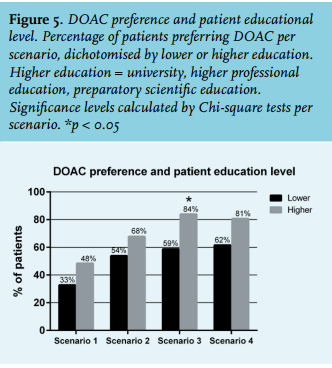 We would like to thank all patients who participated in this study.

This study did not receive any financial support.
The following conflicts of interest apply: M.P.A. Brekelmans, M. Kappelhof and P.T. Nieuwkerk report no conflict of interest for this study. M. Nierman is the current director of the Thrombosis Service Amsterdam (Atalmedial). H.R. Buller has served as a consultant to Sanofi-Aventis, Bayer, Pfizer, Glaxo-Smith-Kline, Astellas, Boehringer-Ingelheim and Daiichi-Sankyo, outside of the submitted work. M. Coppens has received consultancy and lecturing fees, as well as research support from Daiichi-Sankyo, Boehringer-Ingelheim, Bayer, Bristol Myers-Squibb, Pfizer and Sanquin Blood Supply, outside of the submitted work.