Validation of the 1 μg short synacthen test: an assessment of morning cortisol cut-off values and other predictors

Patients
Data of all patients who underwent an outpatient LD-SST in our hospital from January 2003 to March 2015 were collected retrospectively. Only the first LD-SST in this period was included when more than one test was performed per patient. All tests of which a morning cortisol measurement up to three months prior to the LD-SST was known were identified. Morning levels were defined as samples taken between 7:00 and 9:00 am. According to protocol, glucocorticosteroids must be discontinued at least 24 hours prior to the LD-SST. However, due to the retrospective nature of this study it cannot be ascertained that all patients were thus instructed by their referring physician.

Materials and definitions
LD-SSTs were carried out between 8:00 am and 17:00 pm. All tests were performed by a small group of well-trained medical personnel. Patients received an indwelling intravenous catheter. At t = 0 a venous blood sample was taken. Subsequently a 1 µg bolus of synthetic ACTH1-24 (Synacthen®) was administered intravenously. The 1 µg solution was freshly prepared by diluting a 250 µg ampoule of tetracosactide (Novartis Pharma, Nurnberg, Germany) in normal saline (final volume 0.5 ml). The syringe was flushed with 1 ml of normal saline to ensure complete intravenous injection of the 1 µg solution. After 30 minutes venous blood samples were taken for cortisol measurement. The outcome of the LD-SST was considered normal if cortisol levels at either t = 0, t = 30 or t = 60 were higher than 500 nmol/l. The outcome of the test was considered abnormal if cortisol levels were below 500 nmol/l in all samples.

Data collection and definitions
For each patient, morning cortisol concentration prior to the test (if known), use of glucocorticosteroids, history of autoimmune diseases and the main reason for performing the LD-SST were recorded. These reasons were divided into five categories: chronic fatigue symptoms, chronic fatigue in combination with a history of thyroid disease, symptoms of orthostasis or hypotension, suspected pituitary pathology and all other reasons. Only autoimmune diseases associated with autoimmune polyglandular syndrome (APS) type 1, 2 and 4 in the patient history were recorded: diabetes mellitus type 1, hypoparathyroidism, mucocutaneous candidiasis, pernicious anaemia, hypothyroidism, Graves’ disease, Hashimoto’s thyroiditis, coeliac disease, primary hypogonadism, alopecia, vitiligo, autoimmune hepatitis and chronic gastritis.36 Additionally, pregnancy or oestrogen therapy during testing and history of liver diseases were recorded. Also the final diagnosis as documented by the physician after interpretation of the LD-SST and any additional tests was recorded.

Statistical analysis
For determining upper and lower morning cortisol cut-off values, receiver operator characteristic (ROC) curve analysis was performed. The predictive value of the different predictor variables was tested by univariable and multivariable binary logistic regressions. Firstly, all the predictor variables were analysed using univariable binary regression models. Subsequently, all predictors with a p-value higher than 0.200 were included in a multivariable binary regression model. Stepwise, the predictor with the highest p-value was excluded from the model until the model consisted of only statistically significant predictors, p < 0.05. We adhered to the ‘events per variable’ rule to ensure adequate power in the logistic regression analyses.37 All statistical analyses were performed with SPSS version 22 for Windows. 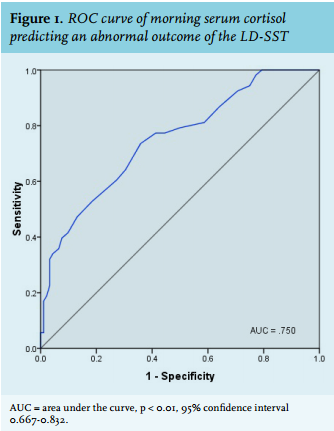 OTHER PREDICTOR VARIABLES OF THE LD-SST

A prediction model was fitted using univariable and multivariable binary logistic regression analysis of the defined predictor variables. Due to the small number of patients in this sample group, only two variables other than morning cortisol concentration could be included in a statistically significant prediction model.
The number of analysed tests was increased by also including the LD-SSTs without a morning cortisol measurement prior to the test. All LD-SSTs performed in an outpatient setting from January 2010 to March 2015 were analysed, resulting in a sample of 329 patients. Patient demographics are summarised in table 2. The average age was 47 years. There was no significant difference between the ages of patients with a normal or an abnormal outcome of the LD-SST (Mann-Whitney test, p = 0.154). A total of 76 tests (23.1%) were abnormal.
The final prediction model of the LD-SST showed a significant predictive value of a history of autoimmune diseases associated with APS, use of glucocorticosteroids, fatigue symptoms and symptoms of hypotension (table 3). Notably, 39.5% of the 38 patients that used glucocorticosteroids had an abnormal LD-SST. 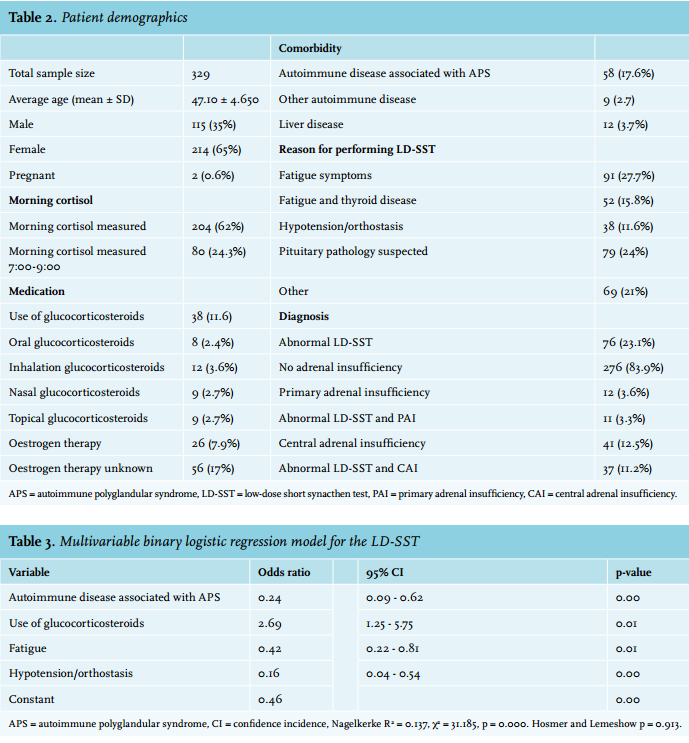 
OTHER PREDICTOR VARIABLES OF THE LD-SST

Limitations
Of all the LD-SSTs performed in an outpatient setting in our hospital between 2003 and 2015, there is a relatively small number of tests where a morning cortisol level prior to the test was known. For this reason it was not possible to make a predictive model for the outcome of the LD-SST, which included morning cortisol as a predictive variable. Such a model would have better identified variables that have a predictive value in addition to morning cortisol itself.
Another limitation is the small number of patients that are diagnosed with primary adrenal insufficiency in this study. One of the consequences is the unexpected result of an abnormal LD-SST being less likely when there is a history of APS-associated autoimmune disease. By extension, the final predictor model could be considered better suited for when central adrenal insufficiency is suspected compared with a suspected primary adrenal insufficiency. However, this study was designed to identify predictors of the outcome of the LD-SST regardless of the incidence of primary and central adrenal insufficiency. In this study we cannot extrapolate the results to patients with suspected primary adrenal insufficiency because of the small number of patients with this diagnosis.
The binary logistic regression model of this study was built with data which were collected retrospectively. More research should be done to verify this model in a prospective setting, including a morning cortisol measurement prior to the LD-SST in all subjects.

The number of low-dose synacthen tests performed in an outpatient setting can be safely reduced by altering the conventional cut-off values of screening morning cortisol measurements. We propose an upper cut-off value of 375 nmol/l and a lower cut-off value of 145 nmol/l. A normal outcome is more likely when the main reasons for performing the test are fatigue symptoms or hypotension. An abnormal outcome is more likely when glucocorticosteroids are used. Especially when central adrenal insufficiency is suspected, different routes of administration of glucocorticosteroids should be taken into account.

The authors have no conflicts of interest to disclose.