Organ donation after circulatory death (DCD), in addition to donation after brain death (DBD), is one of the ways to tackle the growing demand for organs for transplantation. The Netherlands was one of the first European countries to transplant organs (kidneys) from DCD donors, starting in the early 1980s.1,2 DCD in the Netherlands is supported by legislation on organ donation and a national DCD protocol was introduced to standardise the DCD procedures.
The majority of DCD donors in the Netherlands are controlled DCD. According to the Maastricht criteria (table 1) these donors are of category 3 (cDCD3), patients with an infaust medical prognosis, where treatment will be withdrawn awaiting circulatory arrest.3 Since February 2001, kidneys from both DBD and DCD donors have been indiscriminately allocated through the standard national renal allocation program. Although there is a higher risk for primary non-function or delayed graft function after cDCD kidney transplantation, the small difference in graft survival after cDCD compared with DBD kidney transplantation turned out to be acceptable.2,4,5

In practice, patients in intensive care units (ICU) with a non-recoverable or irreversible neurological injury, not meeting brain death criteria, in whom the medical decision to withdraw treatment is taken, are candidates for cDCD and can be referred to the organ procurement organisation. According to the Dutch protocol, cDCD is possible when there is an expected time between withdrawal of life-supporting treatment and circulatory arrest (agonal phase) of two hours or less for kidneys and one hour or less for liver, lungs and pancreas. During this time the organ procurement team is stand-by. After circulatory arrest a no-touch period of five minutes is maintained after which the donor is transported to the operating theatre to procure the organs.
Although the cDCD program predominantly concerned kidney transplantation, the Netherlands has also been successfully transplanting livers from DCD donors since 1999, and DCD lungs and pancreas since 2005.2,6,7 The question raised by the increasing number of DCD donors is how it affects the donation program in terms of effort and number of renal as well as non-renal transplantations. In this article we describe 15 years of experience, between 2000 and 2014, of cDCD in the Netherlands, starting with the number of organ donors who entered into the deceased donation program (referred donors). We focussed on the number of donors from which no organ was recovered or transplanted after referral and which limitations were encountered in cDCD donation. Finally we show the effect on the number of transplantations.

We extracted data regarding deceased organ donation and transplantation in the Netherlands, during the years 2000-2014, from the organ donor procurement registration of the Dutch Transplant Foundation. First we evaluated the total number of referred DBD, cDCD (Maastricht category 3 and 4) and uncontrolled DCD (Maastricht category 1 and 2) donors per year. Referred donors are defined as potential donors in whom at least one organ is reported to the organ procurement organisation with the intention to donate.
From the referred DBD and cDCD3 (Maastricht category 3 only) donors we calculated the percentage of donors whose organs were recovered for transplantation (actual donors) and the percentage of donors from whom at least one organ was used for transplantation (utilised donors, see figure 1). These calculations were done per three-year periods, in order to avoid fluctuations that are present in analyses per year. Reported reasons for no procurement or no transplantation of organs were evaluated. We also analysed these numbers for different age groups. The numbers of transplanted DBD and DCD organs from Dutch donors were expressed per organ type, in which paired organs (kidneys and lungs) were counted as two. The mean number of organs transplanted per referred donor for cDCD and DBD donors were compared per year, with paired organs and split livers being counted as two. Differences in percentages of utilised donors between DBD and DCD, time periods, and age groups were statistically tested by chi-square test using IBM SPSS23 software.
To collect more information about the reasons for not procuring organs in cDCD donors after referral, we used data from another application, our national medical record review. In this application donation officers and transplant coordinators enter data from all patients who died in the ICU regarding organ donation, from identification of potential organ donors until organ procurement.8 The database is almost complete for the years 2008-2014, covering 90% of all 1045 referred cDCD donors in the Netherlands in 2008-2014. From 941 referred potential cDCD donors in this period who gave consent for donation, we evaluated the reasons for not procuring the organs. 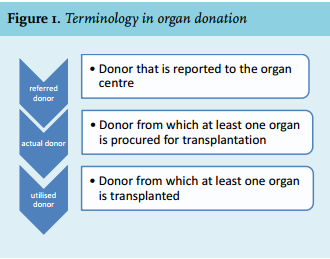 Donors
The total number of deceased patients in the Netherlands who were referred for organ donation increased by 58%, from 213 donors in 2000 (13.4 per million population) to 336 donors (20.0 per million population) in 2014 (figure 2). While DBD donor referral fluctuated between 111 and 170 donors (mean 137 donors) per year, cDCD donor referral has grown from 36 to 181 donors yearly in these 15 years. This represented a change in the percentage of cDCD among all donor referrals of 14% in 2000 to 54% in 2014.
The total numbers of actual and utilised donors did not keep up with the numbers of donors referred, and increased less, at 34% for both. Over the past 15 years, the percentage of referred organ donors that became actual or utilised donors was significantly lower in cDCD3 than in DBD (p < 0.001). In DBD this utilisation rate fluctuated per three-year period between 95% and 97%, but it decreased in cDCD3 from 84% in the years 2000/2002 to 67% in 2012/2014 (p < 0.001, figure 3). Because the contribution of cDCD3 donors among deceased donors rose, the total percentage of utilised donors dropped in the Netherlands, from 95% in 2000 to 81% in 2014.
The number of cDCD3 donors predominantly increased in the higher age groups in recent years, especially since the donor age limit for DCD was raised from 65 to 75 years nationwide in the year 2011 (figure 4A). However, organs were less often recovered and transplanted from the older age groups of referred cDCD3 donors (figure 4B). The percentage of utilised donors was 86% in donors aged 0-40 years in contrast to 62% in donors aged 66-75 years (p < 0.001). 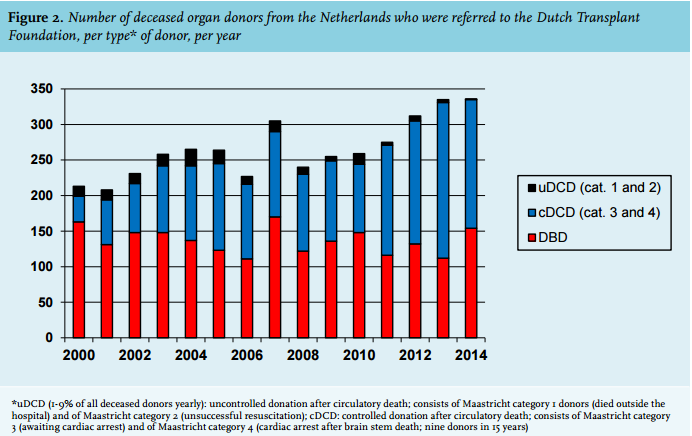 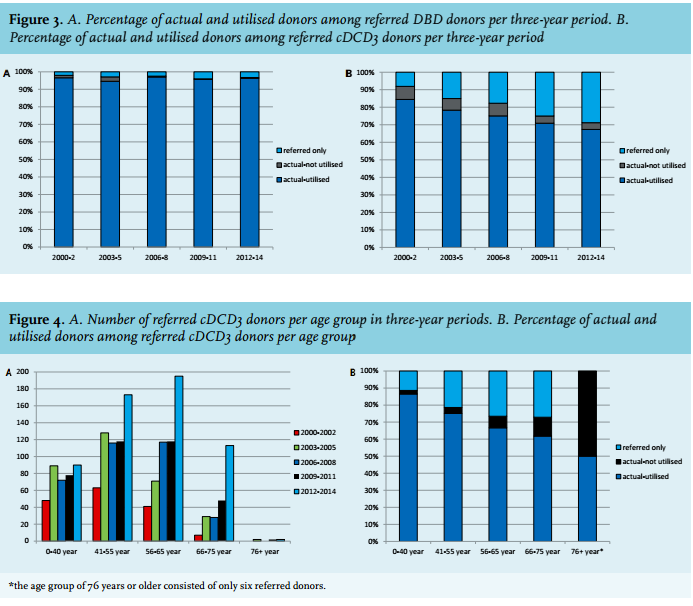 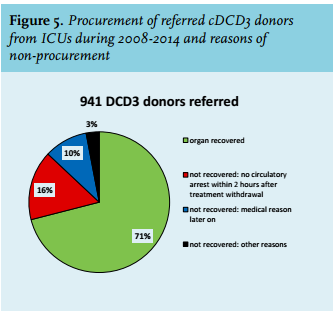 Reasons of non-procurement
Medical reasons were predominantly reported as the reason for not procuring organs from referred donors. After procurement, organs were not transplanted because of newly discovered medical reasons or anatomical pathology of the organ.
Our medical chart review database of potential donors who died in the ICU between 2008 and 2014 also showed another reason for non-procurement. In 71% of the 941 referred potential cDCD donors with consent for donation the organs were recovered. In 16%, procurement was not possible because donors did not die within the maximum two-hour time limit interval after withdrawal of life-supporting treatment (figure 5). In 10% of the referred cDCD donors, organs were not recovered because of other medical reasons that appeared after referral (for example abnormal features in organs discovered by imaging or lab).

Transplantations
Thus far the introduction of cDCD3 in the Netherlands has been successful. The number of referred donors rose considerably (58%, figure 1) and the total number of organs that are finally transplanted increased by 42%, from 646 in 2000 to 920 in 2014. The number of transplanted kidneys was higher during the years 2012-2014, compared with the three-year periods before 2012, and the numbers of transplanted livers and lungs steadily grew, all due to cDCD3 (figure 6). However, so far this has not resulted in higher numbers of transplanted organs per referred DCD donor. These numbers fluctuated yearly with between 1.6 and 2.0 organs per donor, numbers that are still lower than in DBD donors (varying between 3.3 and 4.1 organs per referred donor). cDCD still results predominantly in kidney donation and less often in non-renal donation (liver, lung, pancreas). And until now no DCD heart donation has been performed in the Netherlands. 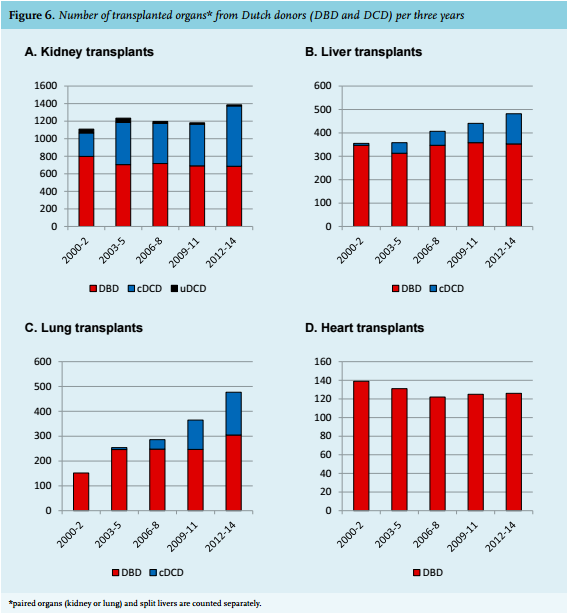 We would like to thank all the Dutch donor and transplant centres for their contribution to the data.