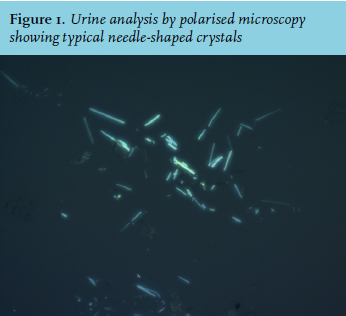 
A 72-year-old male with type II diabetes, complaining of pain in his left arm, was prescribed oral valacyclovir for two weeks because of suspected local herpes zoster infection. Afterwards, the patient was admitted to the neurology ward with nausea and vertigo, with the differential diagnosis including herpes encephalitis; treatment with intravenous acyclovir 700 mg three times a day was started. After polymerase chain reaction testing of the cerebrospinal fluid was found to be negative for herpes viruses, and the acyclovir treatment was discontinued after three doses.
However, one day later, during routine control of his renal function, the estimated glomerular filtration rate had decreased from 76 to 14 ml/min/1.73 m2 , even after fluid repletion. The serum potassium was 6.3 mmol/l. During admission there had been no period of hypovolaemia; an ultrasound excluded postrenal obstruction. Urine analysis by polarised microscopy revealed needle-shaped crystals (figure 1).