Pulmonary embolism (PE) is connected with high morbidity and mortality.1-13 Rapid risk stratification in acute PE is crucial to identify those PE patients with a poorer prognosis and in deciding the appropriate therapy.14-16 The recommended risk stratification in patients with acute PE according to the current European and American guidelines is based on assessment of haemodynamic status, evaluation of right ventricular (RV) dysfunction, cardiac injury markers and outcome scores, such as the Pulmonary Embolism Severity Index (PESI).17,18 Guideline recommendations are based on study results that have emphasised that adverse events and mortality in acute PE are closely related to the initial haemodynamic status of the patients and typical cardiac adaptations.1-4,6,19-25 Haemodynamic instability is associated with the highest mortality rates.2,4,6,13,18,26-28
The Bova score is another simple grading system for stratifying the risk of short-term complications in normotensive PE patients.29,30 The score consists of four variables, which are assessed at the time of PE diagnosis.30 The four variables comprise heart rate, systolic blood pressure, cardiac troponin (cTn) and RV dysfunction.30
We modified the Bova score and, in this study, aimed to test the effectiveness of this modified Bova score to predict in-hospital death in haemodynamically stable and unstable PE patients. The modification of the Bova score was based on the objective to investigate the Bova score not only in normotensive PE patients but also haemodynamically unstable PE patients.

We performed a retrospective analysis of patients with a confirmed diagnosis of acute PE. Consecutive patients treated in the internal medicine department between May 2006 and June 2011 were included. The patients were identified by a search in the hospital information system database for the diagnostic code of PE (ICD Code: I26). Studies in Germany involving retrospective analysis of diagnostic standard data do not require an ethics statement.

Enrolled subjects
Patients were eligible for this study based on the following:

All CT, scintigraphy and phlebography images were analysed by experienced radiologists.

Routine diagnostic strategy
The routine diagnostic strategy followed the recommendations of the European Society of Cardiology (ESC) guidelines from 2008.6 In haemodynamically stable patients with suspected PE, CT was the primary diagnostic tool to confirm the PE diagnosis. In cases of impaired renal function a V/Q scan was used to make the diagnosis. A confirmed DVT with additional typical symptoms of PE and a positive D-dimer value were considered adequate to diagnose PE in only a minority of patients, especially multi-morbid patients with suspected PE. Transthoracic echocardiography and laboratory testing of cTnI were intended for all patients with suspected and confirmed PE, but were not done in all patients.

Definitions
Cardiac injury
According to the American Heart Association (AHA) scientific statement from 2011, myocardial necrosis was defined as a cardiac cTnI elevation higher than 0.4 ng/ml.18

High-risk pulmonary embolism
PE patients with a systolic blood pressure < 90 mmHg at admission were classified as high-risk PE according to the definition from the ESC guidelines6,17 and AHA scientific statement.18

Statistics
PE patients with a Bova score ≥ 4 points and those with a Bova score < 4 points were compared using the WilcoxonMann-Whitney U test.
We used multivariate logistic regression models to investigate the associations between the Bova score and the study endpoints in-hospital death and pneumonia based on PE-related lung infarction, each of which was adjusted for age and gender.
Receiver operating characteristic (ROC) curves with areas under the curves (AUC) and Youden indices were calculated to test the effectiveness of the Bova score to predict in-hospital death and pneumonia based on PE-related lung infarction in an acute PE event. The Wilcoxon-Mann-Whitney test was used to test the deviation of the ROC curve from the angle bisector.
The commercially available software BIAS® (version 10.04) was used for the computerised analysis. P values of < 0.05 were considered to be statistically significant. We used the Bonferroni method to adjust the significance level for multiple testing.

From May 2006 to June 2011, 182 patients with confirmed acute PE were found by a search of the hospital information system database for the diagnostic code of PE. From these identified patients, 52 patients were excluded because they had no cTnI measurement or had not undergone transthoracic echocardiography. Therefore, we included 130 patients in this analysis.
In 86.2% of the patients, the PE diagnosis was confirmed by CT, in 8.4% by V/Q scan and in 5.4% by positive venous ultrasound/phlebography of an extremity consistent with DVT in patients with typical symptoms of PE (chest pain or dyspnoea) and positive D-dimer.
In the study sample, three patients (2.3%) died in hospital after the PE, and six patients (4.6%) presented with haemodynamically unstable PE (high-risk PE patients). Moreover 43.1% (56 patients) presented with pneumonia based on PE-related lung infarction and 70% (91 patients) had a concomitantly detected DVT. The recommended Bova risk staging showed 79 patients in stage I (0-2 points), 33 in stage II (3-4 points) and 18 in stage III (> 4 points). 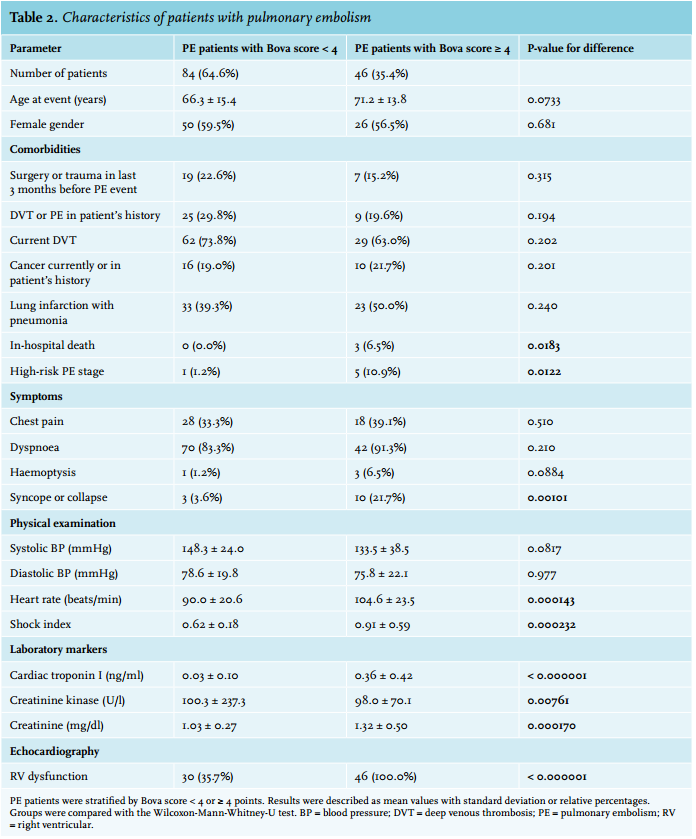 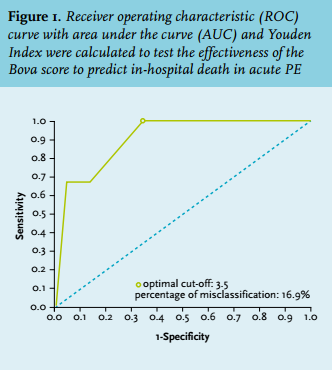 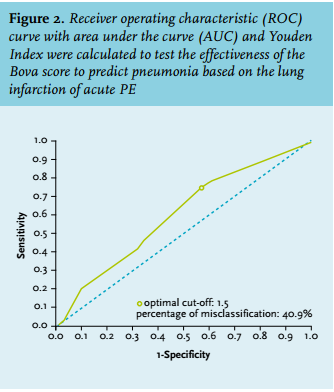 Rapid risk and accurate stratification in acute PE is crucial for evaluation of the patient’s prognosis and for the determination of the appropriate therapy.14-16,31,32 Several study results in acute PE have found that presence of RV dysfunction or myocardial necrosis is associated with increased mortality.2-4,6,9,11,17-22,24,27,33-40 PE patients with an elevated cTn showed a 3.5- to 5.3-fold increase of mortality in the first three months after an acute PE.3,6,10,19
Additionally, heart rate and systolic blood pressure are rapidly available and reliable parameters for the risk stratification process. Heart rate elevations in settings of acute PE are connected with a more severe PE stage and poorer outcome.6,41-43 Therefore, elevated heart rate values have been included in outcome scores, such as the PESI, as a risk stratification parameter.41 Tachycardia was associated with sevenfold higher risk of in-hospital death in one of our analyses that has already been published.44 Systolic blood pressure values of < 90 mmHg were identified as an important prognostic factor in the International Cooperative Pulmonary Embolism Registry (ICOPER).45 In the PESI and the simplified PESI, a systolic BP of < 100 mmHg is one of the parameters to predict poorer prognosis.17,41,46
The Bova score is another new, simple grading system for stratifying the risk of short-term complications in normotensive PE patients.29,30 The Bova score condenses the important risk stratification markers of RV dysfunction, cTn, heart rate elevation and hypotension.29,30
The Bova score was developed for the risk stratification of normotensive PE patients only. We aimed to analyse the usefulness of the Bova score, without focusing on the haemodynamic status, for all PE patients in the internal medical section of our hospital. Therefore, we modified this Bova score for the use in PE risk stratification of both haemodynamically stable and unstable PE patients. We aimed to underline the usefulness and the helpfulness of this score. Although the Bova score was created for better risk stratification, especially in normotensive PE patients, our investigation showed that the Bova score is highly effective to identify those patients with a higher complication and in-hospital death rate in both haemodynamically stable and unstable PE patients. A Bova score of ≥ 4 points identified the patients with a higher risk of short-term mortality with high specificity and specificity and low misclassification rate. All PE patients who died in hospital had a Bova score ≥ 4 points. Bova score was strongly associated with in-hospital death.
The computed effectiveness for the modified Bova score in predicting in-hospital death (AUC 0.908) was thereby distinctly higher than that of cTnI (AUC 0.719)47 or heart rate (AUC 0.655)44 separately predicting in-hospital death in our study. In contrast, Janata et al.48 described a higher effectiveness (AUC 0.92) for cTnT in predicting in-hospital death.48 In the study by Kucher et al.25 the reported AUC for prediction of an adverse outcome was 0.89 for cTnI alone and 0.90 for the combination of cTnI and RV dysfunction in echocardiography.25
In contrast, effectiveness of the Bova score to predict pneumonia based on PE-related lung infarction as a complication of PE was only moderate.
The selection by the inclusion criteria of existing transthoracic echocardiography and existing cTnI value in this analysis, reducing the number of the included patients from 182 to 130, could lead to a selection bias, but this is a retrospective study and we wanted to have an accurately assessed Bova score in each patient. Therefore, it is hypothetical whether more PE patients with low-risk PE did not undergo transthoracic echocardiography examination or have a cTnI value and were excluded than PE patients with intermediate or high-risk PE, but of course it has to be expected that transthoracic echocardiography and cTnI were done less often in PE patients with a lower PE severity status than in those with a higher severity status and therefore a bias has to be suggested. The portion of PE patients with pneumonia related to lung infarction seems high in our study sample at > 40%, but in accordance with these results Goldhaber et al.49 reported in their autopsy study that 54 of 1455 patients showed major pulmonary embolism at autopsy and of these 54 patients 21 (38.9%) had an concomitant pneumonia.49 Therefore, these percentage values are not very different.
Overall mortality of patients with acute PE remains high despite modern diagnostic and reperfusion strategies.32 Management options of acute PE include anticoagulation treatment alone, thrombolysis (systemic or localised) plus anticoagulation, insertion of inferior vena cava filter, catheter embolectomy, or surgical embolectomy.50 The decision-making process to choose the appropriate therapy requires rapid and accurate risk stratification and is crucial to identify those PE patients with a poorer prognosis.14-16,50
ESC guidelines recommend that thrombolytic therapy is the first-line treatment in PE patients with high-risk PE status, presenting with arterial hypotension or cardiogenic shock, with very few absolute contraindications.17 The routine use of thrombolytic therapy in normotensive PE patients was not recommended by the ESC guidelines.17 Randomised trials have shown that thrombolytic therapy resolves the obstruction of the pulmonary artery bed and is connected with beneficial effects on the haemodynamic status of PE patients.16,17,51-56 The results of the PEITHO study emphasised that intermediate-risk PE patients could also benefit from more aggressive treatment options such as fibrinolytic therapy but with the concomitant higher risk of bleeding.16 Beside systemic thrombolysis, catheter-directed thrombolysis in combination with or without ultrasound acceleration for thrombolysis are used to perform localised thrombolysis therapy with lower bleeding risk.57-61
The Bova score could be helpful to identify those PE patients who are of higher risk to die during the early in-hospital course.

Limitations
Important study limitations are the small to medium number of included PE patients and the study’s single centre and retrospective design.