Answer to Photo Quiz: Hypertension at a young age: beware of the unexpected 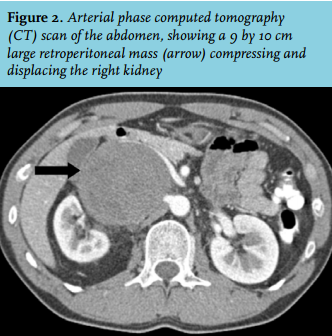 
The renal angiography showed no signs of renal artery stenosis or fibromuscular dysplasia. However, the right kidney appears hypoplastic and displaced with a somewhat curved renal artery. Because of this uncommon deformity, we performed a computed tomography (CT) scan (figure 2). This revealed a 9 by 10 cm large retroperitoneal tumour compressing and displacing the kidney. Fine-needle biopsy demonstrated benign neural cells, corresponding to a schwannoma. Distant metastases were excluded with an MRI-PET scan. As the patient had no symptoms, his blood pressure was well controlled, and removal of this non-malignant lesion required major surgery (probably including removal of the kidney and inferior caval vein), a wait-and-see policy was followed with regular radiological follow-up.

We describe a very uncommon secondary cause of hypertension in a patient in whom the kidney was compressed by a schwannoma. A schwannoma is a benign nerve sheet tumour which is often found in neurofibromatosis, but can also occur sporadically as in this patient.1 As malignant transformation is rare, radiological surveillance without surgical resection is safe.1 Previously, other tumours inducing hypertension by compression of the renal artery have been described, including leimoyosarcomas, pheochromocytomas, and papillary carcinomas.2 Presumably, compression of the kidney and displacement of the renal artery decreased renal perfusion, resulting in increased renin secretion and, subsequently, an increase in blood pressure.
Given the young age of onset we initially suspected renal artery fibromuscular dysplasia, an often curable form of renovascular hypertension.3 Although the renal arteries appeared normal (i.e. no signs of fibromuscular dysplasia or renal artery stenosis), other abnormalities on the renal angiogram pointed us to compression of the renal artery by an adjacent tumour. This illustrates that physicians should be aware of uncommon secondary causes of hypertension in young patients.