Dysphagia, malnutrition and gastrointestinal problems in patients with mitochondrial disease caused by the m3243A>G mutation

Mitochondria and the m.3243A>G mutation

Mitochondrial diseases are the most prevalent inherited metabolic diseases, with an incidence of approximately 1:5000 live births.1 Mitochondria are the cellular organelles responsible for oxidative phosphorylation, which produces energy in the form of adenosine triphosphate. This process is accomplished by the four complexes (complex I-IV) of the respiratory chain and F1 -F0 ATP synthase. Mitochondrial dysfunction can result from mutations in either nuclear DNA (nDNA) or mitochondrial DNA (mtDNA).

The acronym MELAS was first used by Pavlakis and Phillips2 to describe a group of patients with mitochondrial myopathy, encephalopathy, lactic acidosis and stroke-like episodes. In 1990 the m.3243A>G mutation was found as the molecular basis of this disease.3,4 The mutation is located in the MT-TL1 gene and is the most common pathogenic mitochondrial mutation,5-7 commonly described as the MELAS mutation. The phenotype maternally inherited diabetes deafness (MIDD) is also caused by this same mutation and is much more frequent.8 Other phenotypic expressions of the m.3243A>G mutation include hypertrophic cardiomyopathy,9 retinal dystrophy,10 focal segmental glomeruloslerosis,11 myoclonic epilepsy with ragged-red fibres12 and oligo-symptomatic variants of the acronym MELAS.13,14 The percentage of affected mitochondria per cell in a specific tissue is referred to as heteroplasmy, and the level of heteroplasmy may vary widely between tissues of a single individual. This marked intra-individual and inter-individual variation in mitochondrial heteroplasmy partially explains why there is a wide spectrum of diseases and disease severity observed between family members that carry the same mitochondrial mutation. Previous studies have shown that urinary epithelial cells (UEC) are the best non-invasively available tissue to test the level of heteroplasmy of the m.3243A>G mutation.15,16

Dysphagia in mitochondrial disease has been described in several studies which are hard to compare because of variations in definitions and study methods. In patients with the m.3243A>G mutation, incidences vary from 18% in a study using the NMDAS to score dysphagia to 38% in a study performed using a more specific approach.23,24 Also, short stature and lower bodyweight are frequently described in mitochondrial disease. Patients with an MIDD phenotype have a lower body mass index (BMI, weight(kg)2 /height(m)) compared with other diabetic patients.25,27

For both dysphagia and gastrointestinal problems a relation with lower body weight and risk for malnutrition in patients with a mitochondrial disease has been suggested but never proven.18,21 The present study therefore focused on dysphagia and gastrointestinal problems in a cohort of carriers of the m.3243A>G mutation and identification of symptoms that lead to decreased BMI and increased risk for malnutrition.

At the Nijmegen Center for Mitochondrial Disorders (www.ncmd.nl) at Radboud university medical center, 114 adult carriers of the m.3243A>G mutation participated in our cohort study.24 All participants received the questionnaire. This study was approved by the ethics committee of the Nijmegen-Arnhem region. Written informed consent according to the Helsinki agreement was obtained from all carriers.

All carriers were scored using the NMDAS.28 The NMDAS constitutes a validated method to monitor the clinical expression of mitochondrial disease and to follow up the course of disease over time. The NMDAS consists of the following four sections: 1) Current function, which gives insight into the general functioning of patients in the past four weeks, including swallowing; 2) System-specific involvement, which uses a clinical history supplemented by specific information to gain insight into the functioning of individual organ systems including gastrointestinal symptoms; 3) Current clinical assessment, i.e. a general and neurological clinical examination, which gives insight into the current functional status of the patient; 4) For quality of life, we used a Dutch translation of the SF-12v2 quality of life test.

All participants received the Gastrointestinal Symptoms Questionnaire.29,30 This self-report questionnaire contains 16 items regarding gastrointestinal involvement of disease for the past four weeks. Severity of the symptoms is scored on a 7-point Likert scale, where 0 indicates no symptoms and 6 indicates extreme symptoms. The final question of the questionnaire is a 50-point scale asking about the overall burden of the gastrointestinal symptoms. We added specific questions on dysphagia and frequency of stools. The validated Malnutrition Universal Screening Tool (MUST)31 was used to collect the self-reported anthropometric data and to screen for the risk for malnutrition. We compared the data to age-matched anthropometric data from the Dutch Central Bureau of Statistics (CBS) 2011 (n = 2034) and to a Dutch reference database from the Gastrointestinal Symptoms Questionnaire (n = 1616). Data collection for this reference database was done in 2006, participants who matched the general Dutch population were selected with CBS statistics.22

Carriers had a significantly lower frequency of overweight (BMI > 25 kg/m2 ) or obesity (BMI> 30 kg/m2 ) (32%) compared with the average Dutch population (48%) (figure 1). They were significantly more frequently underweight (BMI < 20 kg/m2 ) than the average Dutch population: 14 vs. 2%. Of the women with a NMDAS score above 20, 31% were underweight. Carriers with BMI < 20 kg/m2 had a significantly higher NMDAS (p = 0.01). A negative correlation between BMI and heteroplasmy levels in UEC was present in carriers of the m.3243A>G mutation (Spearman correlation coefficient = - 0.319, p = 0.003). Of the carriers, 19% (n = 17) had a MUST score of 1 or 2: average (12%) to high (7%) risk for malnutrition. In 14 carriers this score was based on their low BMI. Of the other three carriers with a risk for malnutrition, two had a healthy weight and one was overweight; their MUST scores were based on more than 5% loss of bodyweight in the last six months.

The majority of carriers (81%) had a MUST score of zero: no risk of malnutrition. Five percent of the m.3243A>G carriers used medical feeding supplements; no patients were dependent on tube feeding.

In the four weeks prior to answering the questionnaire, 79 carriers (86%) suffered from at least one gastrointestinal symptom. Nearly all gastrointestinal symptoms had a higher frequency and increased severity in carriers of the m.3243A>G mutation compared with the average Dutch population (figure 3). The most frequent problems were bloating, hard stools and flatulence. Nausea and diarrhoea and alternately solid or loose stools were also common but there was no significant difference to the controls for these symptoms.

Hard stools or constipation were reported by 48% and 38% of the carriers, respectively, whereas controls only reported these symptoms in 22% and 14%, respectively (p < 0.001).

Fourteen percent of the patients used laxatives and 44% had a stool frequency of less than once a day.

Overall, 69% of the carriers of the m.3243A>G mutation reported one or more constipation-related symptom (use of laxatives, stool frequency of < 1 time a day, hard stools and/ or self-reported constipation).

The gastrointestinal symptoms that were most frequently reported as severe (5, 6 or 7 on the 7-point Likert scale) were: hard stools (14%), constipation (11%), flatulence (11%) and bloating (10%). All of these symptoms were significantly more frequently scored as severe by carriers compared with controls. Also significantly more frequently scored as severe were regurgitation (8%), postprandial fullness (9%), belching (10%), dysphagia for solids (2%), incomplete stools (8%) and sticky stools (7%).

One patient in this cohort had a pancreatitis in the past, two patients needed surgery for severe constipation.

There was no correlation between heteroplasmy levels in UEC and gastrointestinal symptoms. Frequently reported symptoms in patients carrying the m.3243A>G mutation are myopathy and diabetes. The presence and severity of these symptoms had no significant relation to the gastrointestinal problems. 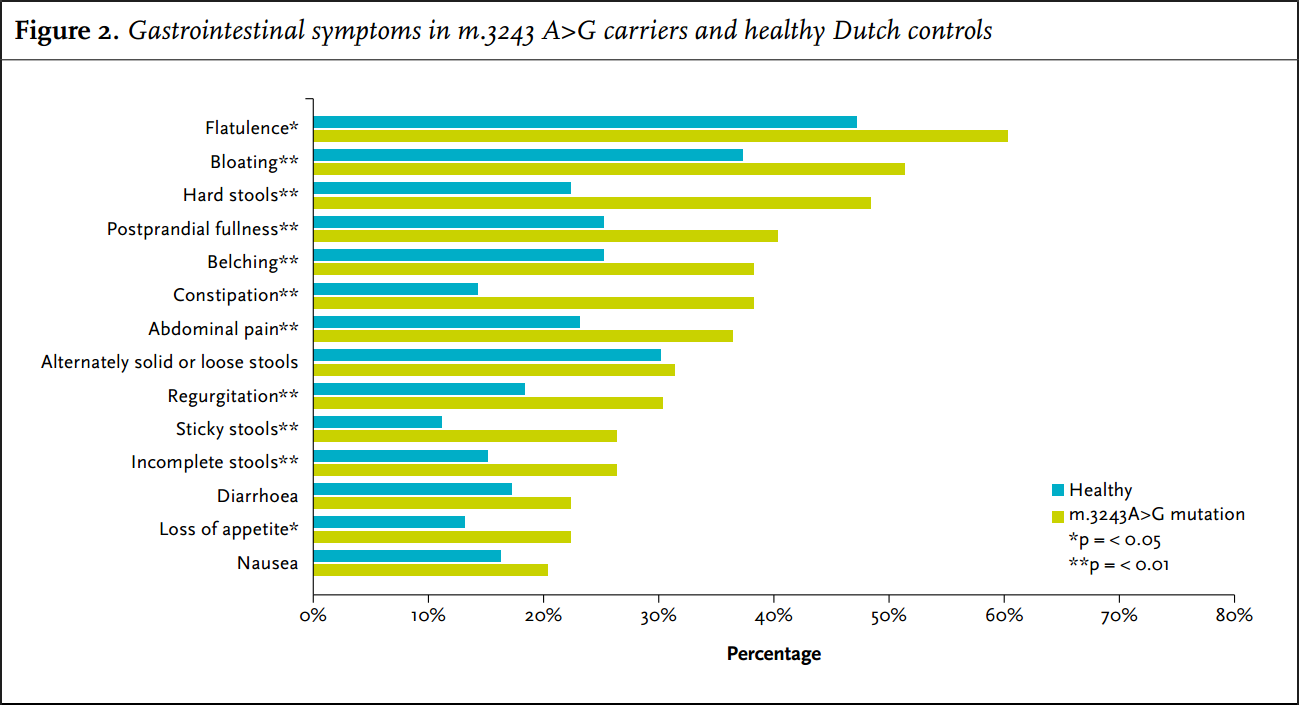 In this study 21% of m.3243A>G carriers had trouble swallowing, as scored by the physician who performed the NMDAS. When we specifically asked for all sub-items of the NMDAS swallowing score in the questionnaire, this frequency was much higher: 45%. Using the Gastrointestinal Symptoms Questionnaire, dysphagia seems to be a frequent problem (33%), but the severity was not very high (figure 3). Liquids are less of a problem compared with solids; the difference with controls was significant both in the carriers who have trouble with liquids (p = 0.008) as with solids (p < 0.001).

As there currently is no cure for mitochondrial disease,32 optimising nutrition and treating major symptoms such as constipation may be one of the few methods to improve quality of life. Because gastrointestinal symptoms are very common in these carriers as well as in the general population, and these often have a non-specific character, there may be a considerable risk for under-diagnosis of these possibly treatable problems.

The present study shows for the first time in a robust cohort that dysphagia and gastrointestinal problems, and more specifically constipation, are very common in carriers of the m.3243A>G mutation. These symptoms are common in the total patient cohort and are not related to heteroplasmy levels in UEC, disease severity or the presence of diabetes.

The severity of gastrointestinal problems as well as the overall disease severity and heteroplasmy levels in UEC are associated with a decreased BMI and an increased risk for the development of malnutrition. Strong points of this investigation include the high number of enrolled carriers with a homogeneous genetic background, despite the low incidence of this disease. Also, the high response rate renders these data highly relevant for the guidance and treatment of these carriers.

Patients presented with a range of underlying gastrointestinal problems. Some were diagnosed with irritable bowel syndrome (IBS) prior to the mitochondrial diagnosis which does not seen surprising given the diversity of symptoms. Although nausea, diarrhoea and alternately solid or loose stools are common in this cohort, similar symptoms occur just as frequently in the control population, and do not seem to be specific for the m.3243A>G mutation, yet remain potentially treatable.

We show in this study that severe gastrointestinal symptoms increase the risk for malnutrition in carriers of the m.3243A>G mutation. Fourteen percent of carriers had a BMI of 2 and in more severely affected patients (NDMAS >20) even up to 31% had a BMI of 33-35 as in other disease,36,37 this remains a major concern in these patients.

Dysphagia may well be more common than both doctors and patients realise. In a non-specific questionnaire for swallowing problems (as included in the NMDAS), a low prevalence of dysphagia was reported. For instance, in our previous study we reported an 18% incidence of dysphagia in a cohort of m.3243A>G carriers.24 In a partly overlapping cohort we now found that 45% of patients suffered from dysphagia using a more specific questionnaire based on the NMDAS.

Dysphagia usually develops slowly and is not severe in most patients, and patients may therefore adapt their eating pattern sufficiently. This notion might also explain why no differences in BMI between patients with mild dysphagia and without dysphagia were found. As with other neuromuscular disorders, solid foods seem to cause more problems than liquids.38 Muscle weakness is the most likely cause for dysphagia in this patient group and demands a different treatment strategy than dysphagia from other causes.19,38 For example, in dysphagia due to cerebral damage, it is very common to prescribe thickened drinks which will aggravate dysphagia in mitochondrial patients and will take more energy to consume.

In this study we used low BMI as a marker for malnutrition, because it is an easily available variable suitable for comparison with healthy controls and for statistical analyses. BMI, however, is not a validated variable for malnutrition in neuromuscular disorders and it is known that patients with normal BMI could suffer from low fat-free mass which is also an important marker for malnutrition. In future studies we would like to recommend to use body composition as an additional marker.

We thank Susanne Leij for her assistance in preparing the manuscript.

Paul de Laat received a grant from ENERGY4ALL. Jan A.M. Smeitink is the CEO of KHONDRION BV. Heidi E.E. Zweers, Simone Knuijt, Geert J.A. Wanten and Mirian C.H. Janssen had no conflict of interest. Data from the manuscript were presented at SSIEM Congress I Innsbruck, Austria from 2-5 September 2014 and at the Euromit 2014 in Tampere, Finland from 13-20 June 2014.