Of more than 3,000 patients undergoing splenectomy, only six were performed for a wandering spleen (lien mobile).1-3 Patients can present with torsion of the splenic vasculature and acute or chronic abdominal pain, or be completely asymptomatic. Torsion can lead to infarction of the spleen, and a wandering spleen can also be complicated by gastric volvulus, bowel obstruction, gastric varices, pancreatitis (due to incorporation of the pancreas’ tail in the spleen’s vascular pedicle), and traumatic laceration. In cases of chronic or recurrent torsion, venous congestion can lead to splenomegaly.

The aetiology of a wandering spleen can be congenital or acquired. The congenital form is caused by a lack of development of the primary ligamentous attachments of the spleen. The acquired form can be caused by laxity of these attachments, which is thought to be caused by hormonal changes and multiparity. This association with pregnancy can explain the overrepresentation of females in the child-bearing age among adult patients with a wandering spleen. No association has been reported on the presence of cysts and a wandering spleen.
Because of the risk of torsion and other complications, splenectomy or splenopexy is recommended, without evidence on the supremacy of either option. Because the risk of torsion after splenopexy of a spleen this enlarged was deemed high, our patient underwent splenectomy. On pathological examination, two pseudocysts without evidence of malignancy were found (figure 2). 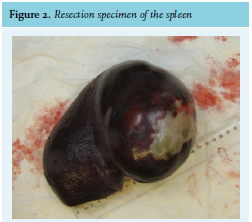