Anaemia: A disease or symptom

Anaemia is a haematological abnormality commonly encountered by general practitioners and hospital physicians. Worldwide, anaemia is estimated to affect 1.6 billion people.1 Anaemia is diagnosed using a patient’s haemoglobin concentration; however, this information does not determine the causative underlying pathology of the anaemic state. Anaemia pathology can be divided into three broad categories: a decreased production of red cells, an increased destruction of red cells, or a loss of red cells through bleeding. However, anaemia pathology is often multifactorial and can present as the manifestation of an underlying disorder.

The World Health Organization defines anaemia as a condition in which the number of red cells or their oxygen-carrying capacity is insufficient to meet physiological requirements. The United Kingdom (UK) laboratory definition of anaemia is a haemoglobin level two standard deviations below the normal for age and sex. This correlates as the following:

The mean cell volume (MCV) can be used to categorise anaemia and therefore guide subsequent investigations. Using MCV, anaemia can be categorised accordingly:

The management of iron deficiency anaemia consists of:

In the majority of patients, iron stores can be replenished through the use of oral iron supplements. Typical treatment regimens for iron deficiency anaemia advise 100-200 mg elemental iron per day in one dose (200 mg PO (orally) ferrous sulphate = 65 mg elemental iron).4 For children and infants, a dose of 3-6 mg/kg (max. 200 mg) daily is advised.5 However, current evidence would suggest that lower doses of iron may be as effective and better tolerated.6 Haemoglobin should be re-checked after 2-4 weeks of iron supplementation. A haemoglobin rise of 20g/l over 3-4 weeks is indicative of a response. Once the haemoglobin and red cell indices have normalised, iron supplementation should be continued for three months. If faster repletion is required or if gastrointestinal absorption is impaired, intravenous (IV) iron can be an effective treatment modality. Nonetheless, it should be noted that IV iron supplementation requires administration by a healthcare professional and consequently, can increase the burden on healthcare resources. Furthermore, IV Iron therapy is associated with an increased risk of hypersensitivity reaction.7

In patients with a microcytic anaemia and normal iron studies, a diagnosis of thalassaemia should be considered. Thalassaemia is often associated with a strong family history, and occurs predominately in patients of Mediterranean, Indian, South East Asian, or Chinese descent. Thalassaemias have a highly variable phenotype, ranging from asymptomatic patients to those who are transfusion dependant. Mehtzer’s index (MCV/red blood count) can be used as a tool to differentiate between IDA and thalassaemia: - < 13 is suggestive of thalassaemia and > 14 is suggestive of IDA.8 A recent meta-analysis has demonstrated that although this index is easy to calculate, it is associated with false positives and false negatives. Consequently, this index is best suited as a screening test in combination with other factors (e.g., ethnicity, age).9 To accurately diagnose thalassaemia, a peripheral blood film and haemoglobin electrophoresis is required. In patients with a high index of suspicion of alpha thalassaemia trait (Chinese, South East Asian, and Indian descent) combined with low MCV and normal Hb electrophoresis, it is recommended that a DNA analysis is performed to detect the alpha thalassaemia gene. An alternative technique for detecting deletions in the haemoglobin alpha gene is multiplex ligation-dependent probe amplification (MLPA).10 However, MPLA can only detect the seven most common alpha gene deletions. Therefore, if the suspicion of alpha thalassaemia persists and the MLPA testing is negative, further DNA analysis is warranted. 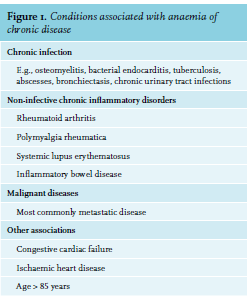 associated with a wide variety of inflammatory, infective and malignant diseases (see figure 1). These chronic inflammatory states cause anaemia to develop due to three pathophysiological mechanisms:

Anaemia of chronic disease should be considered in patients with a normal/raised ferritin, chronic inflammatory state, low haemoglobin and normal mean cell haemoglobin. It is important to rule out other causes of anaemia (e.g., iron deficiency, haematinic deficiency) before making a diagnosis of ACD.
It is important to note that in elderly patients, anaemia is more frequent. The prevalence of anaemia in those > 85 years exceeds 20%. Furthermore, a lower haemoglobin (< 110 g/l) was independently associated with a greater mortality.15 In addition to age, the severity of the anaemia can often correlate with the severity underlying disorder. Therefore, the successful treatment of the underlying disorder has been shown to improve the anaemia.16,17 However, in some conditions (e.g., heart failure, incurable cancer) it may not be possible to reverse the underlying pathology. There is some evidence demonstrating that IV iron may be able to overcome hepcidin-associated reticuloendothelial blockade of iron. IV iron is not recommended for use in ACD associated with chronic infections, but may be a possible therapeutic option for ACD associated with malignancy or a chronic inflammatory disorder.

Normocytic anaemia is a common finding in patients with chronic kidney disease. This can be managed with erythropoietin stimulating agents (ESA), following consultation with a renal physician. Nonetheless, ESAs should be avoided if the benefits of improving the anaemia are negated by intractable co-morbidities or where the individual patient prognosis does not warrant such an approach.18,19 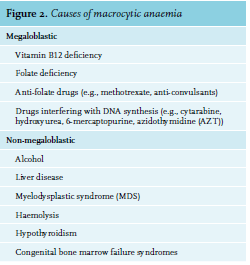 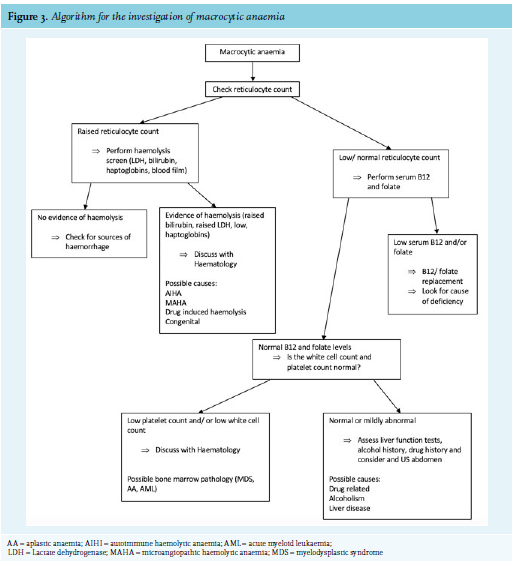 VITAMIN B12 AND FOLATE DEFICIENCY

Vitamin B12 and folate deficiency remain the most common causes of megaloblastic anaemia worldwide. Vitamin B12 deficiency remains a common problem in developed countries, despite the fortification of some food groups. Those over the age of 60 years old are at particular risk, with deficiency or mild depletion found in > 20% of those > 60 years old in a United States (US) populationbased study.20
Folate deficiency has become increasingly rare in countries where certain food groups have been supplemented with folate. Folate fortification of food in the US has reduced the prevalence of folate deficiency to < 1% of the population.21 However, in countries where the supplementation of foods does not occur, folate deficiency is subsequently more frequent.22 A 2015 report on a UK-based epidemiological study published serum folate levels below the WHO threshold for folate deficiency in 15.5% of men and 13.9% of women aged 19-64 years.23
The underlying aetiology of B12 and folate deficiency is outlined in table 3. Although serum folate and serum B12 (cobalamin levels) are readily available and easy to perform tests, they are both associated with significant false-negative rates. Therefore, in instances where the clinical suspicion of B12 deficiency and serum B12 levels are borderline, it is recommended to perform methylmalonic acid levels or Holotranscobalain levels.24 Similarly, in the presence of strong clinical suspicion of folate deficiency, but a persistently normal serum folate level (and B12 level), a red cell folate assay may be undertaken. Importantly, this assay is not available in all laboratories and is less cost effective.25 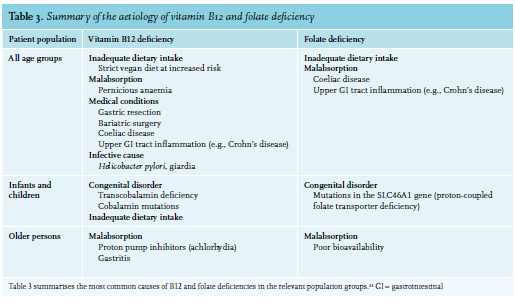 Patients presenting with features of haemolytic anaemia should be discussed with a haematologist for further advice on investigation, management, and potential referral.


OTHER CAUSES OF MACROCYTIC ANAEMIA

Alcohol and liver disease remain important causes of macrocytosis and macrocytic anaemias. A full medical, drug, and social history should be included in the initial work-up of macrocytic anaemia. Alcoholism is a common cause of macrocytosis in the UK, and alcohol-induced anaemia may persist even after months of abstinence. A history of liver disease or stigmata of chronic liver disease on examination should prompt consideration of liver disease-related anaemia.
Myelodysplastic syndrome and other bone marrow failure syndromes are also important causes of anaemia. In bone marrow pathologies, normocytic or macrocytic anaemia often occurs in combination with thrombocytopenia and/ or leucopenia. Peripheral blood film should be performed to look for distinctive morphological abnormalities (e.g., Pseudo Pelget Huet cells, immature granulocytes), which can help guide whether a patient requires further investigation with a bone marrow biopsy.

This review did not receive any financial support. The authors report no conflicts of interest for this study. This work has been used in an eLearning module on e-LfH. E-LfH is a Health Education England Programme. Permission has been obtained to publish part of the content in this article. (https://portal.elfh.org.uk)