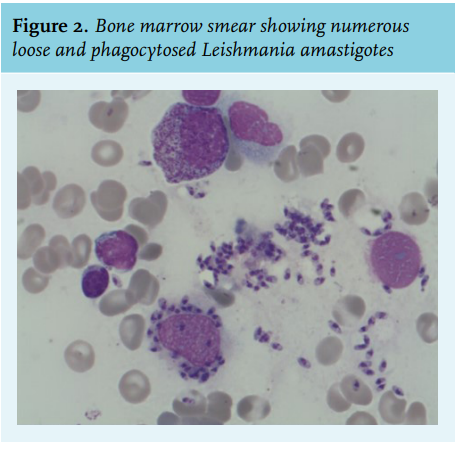 The peripheral blood smear revealed one monocyte with intracellular micro-organisms: Leishmania amastigotes. Amastigotes are small spherical non-flagellated cells ranging from 2-4 µm in diameter. The nucleus and kinetoplast are surrounded by a small ring of vacuolated cytoplasm (figure 1). Detection of Leishmania amastigotes in bone marrow aspirate (figure 2) and Leishmania DNA by polymerase chain reaction (PCR) using whole blood confirmed the diagnosis of visceral leishmaniasis. Discrimination between Leishmania infantum or Leishmania donovani was not possible, but epidemiologically, Leishmania infantum is the most likely causative micro-organism in this case. Visceral leishmaniasis is a chronic infectious disease with an incidence of approximately 0.2-0.4 million cases each year. More than 90% of cases occur in India, Bangladesh, Sudan, South Sudan, Brazil, and Ethiopia. The case fatality rate is estimated at 10%.1 Visceral leishmaniasis is transmitted from animals to humans by infected female sand flies. It is endemic in the Mediterranean countries and in southern Europe, it is responsible for 700 cases per year.2 Leishmania infantum is the most frequent species in this region. Domestic dogs serve as the main reservoir, but other mammals such as red foxes, rats, and mice can also host this parasite Leishmania donovani also causes visceral leishmaniasis, but it is only reported in Cyprus and Turkey.3 Immunocompromised patients are at the highest risk of visceral leishmaniasis.4 Typical symptoms of visceral leishmaniasis are intermittent fever, hepatosplenomegaly, and pancytopenia. The parasite proliferates in the mononuclear phagocytic system in the spleen, liver, and bone marrow. Diagnosis is confirmed by serological and molecular methods and by microscopy of bone marrow aspirate. Microscopic evaluation of peripheral blood is usually not diagnostic, but in immunosuppressed patients, amastigotes may sometimes be seen in peripheral mononuclear cells, a very specific finding for visceral leishmaniasis.5 The patient received a therapy of intravenous liposomal amphotericin B (300 mg/day) for 10 consecutive days. After the fourth day, the dose interval was doubled because of her impaired renal function. During the eighth dose, the patient became dyspnoeic, hypotensive, and died suddenly. Probable cause of death was myocardial infarction or pulmonary embolism, but unfortunately no autopsy was performed.