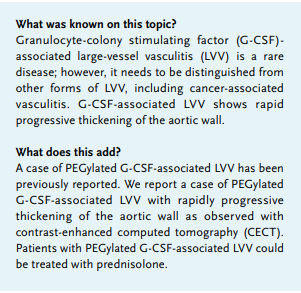 Large-vessel vasculitis (LVV) is a chronic, idiopathic, granulomatous vasculitis of medium and large arteries.1 LVV is thought to develop in a subacute manner, over several weeks or months. When clinicians find LVV in patients with solid cancers, they are likely to suspect cancer-associated vasculitis.2 On the other hand, when clinicians find aortitis during chemotherapy treatment in such patients, they might recognise pegfilgrastim as the cause of inflammation. Pegfilgrastim is a PEGylated form of granulocyte-colony stimulating factor (G-CSF) that induces long-acting neutrophil proliferation and maturation. Due to its mild adverse effects, pegfilgrastim is considered relatively safe, and its adverse effects include back pain, headache, and fever, similar to those of filgrastim.3 Recently, we found a rare case of LVV that developed during the administration of PEGylated G-CSF.

A 71-year-old Japanese female with stage IV endometrial cancer was treated with a single dose of pegfilgrastim for chemotherapy-induced neutropenia. Positron emission tomography (PET)-computed tomography (CT), performed three weeks before treatment, revealed no uptake in the aortic wall. After four days of treatment, a fever of 39.0 °C developed without any other symptoms. Her blood pressure was normal, and no blood pressure differences were observed between both arms. Her physical examination was unremarkable. Her laboratory results showed a total white blood cell count of 12.2 x 103 /μL (normal range 3.0-8.5 x 103 /μL), with an absolute neutrophil count (ANC) of 10.2 x 103 /μL, C-reactive protein of 278.5 mg/l (normal range 0-2.0 mg/l), and erythrocyte sedimentation rate of 111 mm/h (normal range 3-15 mm/h). Her blood culture tests were negative. The first contrast-enhanced CT (CECT) scan, which was performed four days after pegfilgrastim administration, showed no remarkable changes (figure 1A). Three days later, the follow-up CECT scan revealed high-attenuation wall thickening of the aortic arch and descending thoracic aorta (figure 1B). We could not detect such changes in her carotid arteries and abdominal aorta. Based on the 2012 Revised International Chapel Hill Consensus Conference Nomenclature of Vasculitis, she was diagnosed with giant cell arteritis (GCA)-like LVV.4 After the administration of oral prednisolone (PSL) at 60 mg per day, both her symptoms and abnormal CECT findings were resolved within four weeks (figure 1C). During the diagnosis and treatment of LVV, there was no evidence of changes in the endometrial cancer spreading, remission, or invasion of other organs.

G-CSF-associated LVV is a rare disease. The frequency of aortitis in patients treated with G-CSF is 0.47% (16 out of 3409), as documented in the Japanese Adverse Drug Event database.5 In the present and previous cases,6 LVV appeared after administration of pegfilgrastim. We evaluated seven cases of patients with G-CSF-associated-LVV, shown in table 1.6-11 Patients with solid cancers (cases 3, 4, 5, 6, and our case) developed vasculitis within 13 days of G-CSF administration. As seen in our case, the progression of vasculitis was rapid and developed within one week (figures 1A-B). Among these five cases, two PEGylated G-CSF-treated patients (2 out of 2) were treated with PSL, while three non-PEGylated G-CSF-treated cases (3 out of 3) went into remission without PSL after cessation of G-CSF. Therefore, PEGylated G-CSF-associated LVV could be treated using corticosteroids.
G-CSF drugs may affect various sized vessels in the body, including large vessels. Cutaneous leukocytoclastic vasculitis, mesenteric vasculitis, and polyarteritis nodosa (PAN) have also been reported in patients treated with G-CSF.12,13,14 Notably, cases of cutaneous vasculitis recurrence upon re-exposure to G-CSF have been reported in detail.14 Among these cases, measurement of ANC counts showed that the ANC in most cases increased above 800/μL at the time of recurrence, whereas cutaneous vasculitis showed no recurrence when ANC was maintained between 200/μL and 800/μL. Therefore, G-CSF-associated vasculitis is aggravated by neutrophil mobilisation.
When clinicians administer G-CSF treatment, including the PEGylated form pegfilgrastim, drug-associated LVV should be suspected in cancer patients. A radiological examination (e.g., CECT scan) may be suitable for detecting thickening in the aortic wall. The manifestation of G-CSF-associated LVV was rapid progressive aortic wall thickening, which might be distinguished from other forms of LVV. 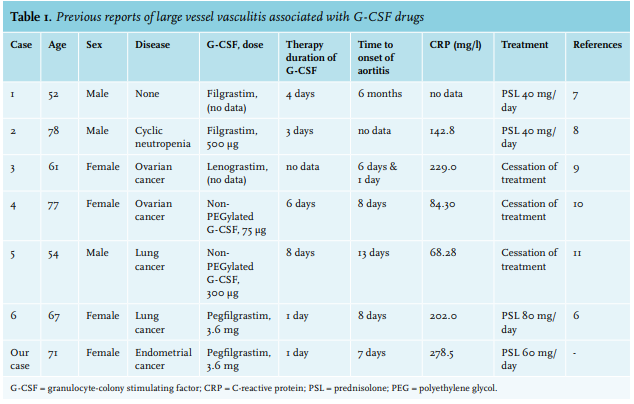 This research was supported by JSPS KAKENHI [Grant Number: 19K18499]. The authors declare no competing interests.