A 46-year-old HIV-positive man having sex with men in Jamaica presented to the infectious disease outpatient clinic with itching skin lesions on his lower left leg. The skin lesions had appeared after he arrived in the Netherlands, a few weeks earlier. The patient reported no primary chancre, fever or other skin or mucosal abnormalities. His last unprotected sexual contact was in Jamaica, three months before initial presentation. The alcohol use of the patient was three units/week and his nutritional state was normal. His HIV viral load was undetectable using antiretroviral therapy consisting of emtricitabine, tenofovirdisoproxil and nevirapine and he had an adequate immune status with a CD4 count of 563 x 106/l. Other laboratory tests showed no diabetes or hepatitis. A serological test for syphilis was performed during the first visit to our outpatient clinic. The fluorescent treponemal antibody absorption test, Treponema pallidum haemagglutination assay 1:40960, and Rapid Plasma Reagin (RPR) test 1:1 were positive. The patient recalled a previous syphilis treatment with multiple injections in Jamaica, one and a half years ago. Unfortunately, no additional information on clinical stage or laboratory results from this episode were available. The results were interpreted as a treated T. pallidum infection and follow-up serological testing was planned. The lesions on the lower left leg were described as localized areas of lichenified eczema with scaly surfaces. At first, the clinical diagnosis was lichen simplex chronicus and treatment with a potent topical steroid class IV was started. After eight weeks, the lesions did not respond to the treatment and the lesions became progressive with multiple ulcerations (figures 1 and 2). Two skin biopsies were taken. 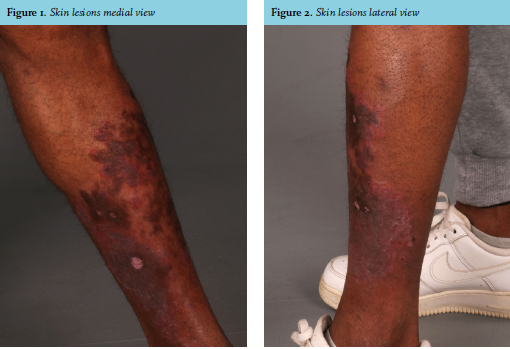 WHAT IS YOUR DIAGNOSIS?

See page 417 for the answer to this photo quiz.