Traditionally, pneumonia is categorized as communityacquired pneumonia (CAP), hospital-acquired pneumonia (HAP) or ventilator-associated pneumonia (VAP), as the aetiology and empirical antibiotic treatment differs depending on where and how the infection was acquired. In 2005, healthcare-associated pneumonia (HCAP) was introduced as a novel category by the American Thoracic Society (ATS) and the Infectious Diseases Society of America HAP and VAP guidelines.1 Patients with HCAP often present atinfection with antibiotic-resistant or healthcare-associated pathogens, such as Staphylococcus aureus, Gram-negative Enterobacteriaceae, and Pseudomonas aeruginosa.1 Therefore, the guidelines recommend empirically treating HCAP with broad-spectrum antibiotics, similar to HAP and VAP.1 This has led to a large increase of broad-spectrum antibiotic use without apparent clinical benefit for these patients.2-5 Recent evidence suggests that the predictive value of HCAP criteria for the need of broad-spectrum antibiotic treatment might be lower than anticipated.2,6-11 In response to these findings, HCAP was removed from the 2016 ATS HAP/VAP guidelines and it was suggested to consider incorporating HCAP recommendations into CAP guidelines, as both CAP and HCAP patients are initially cared for in the emergency department.8 Several studies have already evaluated the predictive value of HCAP criteria for bacterial aetiology in CAP patients.6,7 However, the appropriateness of incorporating HCAP into CAP guidelines depends on the prevalence of pathogens requiring broader antibiotic treatment and the preferred empirical treatment for CAP patients, which differs per geographical region. In the Netherlands, the first choice of empirical treatment for moderate-severe CAP is narrow-spectrum beta-lactam monotherapy.12 Current HCAP research focuses on predicting the presence of multidrug-resistant pathogens (including Methicillinresistant Staphylococcus aureus (MRSA) and extendedspectrum beta-lactamase-producing Enterobacteriaceae) and non-susceptibility to broad-spectrum beta-lactams (ceftriaxone or ampicillin-sulbactam), macrolides and fluoroquinolones.13-17 In the Netherlands, infections caused by these resistant pathogens are rare and pneumonia acquired in nursing homes is usually considered as HAP. This is why the relevance and predictive value of HCAP criteria for the Northern European or Dutch setting, i.e. for the non-susceptibility to narrow-spectrum beta-lactams, remains unknown. Our main study objective was to evaluate the predictive value of HCAP criteria for narrow-spectrum beta-lactam (i.e. amoxicillin) non-susceptibility (thus needing broad-spectrum treatment) in patients hospitalized for moderate-severe CAP. In addition, we assessed the predictive value of HCAP criteria for non-susceptibility to broader antibiotic regimens, including amoxicillin-clavulanic acid, ceftriaxone, moxifloxacin, amoxicillin plus azithromycin and amoxicillin plus ciprofloxacin.

Study subjects and design
We performed a post-hoc analysis of an observational cohort study, nested within the Community-Acquired Pneumonia — Study on the Initial Treatment with Antibiotics of Lower Respiratory Tract Infections (CAP-START trial) — which was a cluster randomised trial performed between February 2011 and August 2013 in seven hospitals in the Netherlands.18 Patients above 18 years of age who were admitted to a non-ICU ward for suspicion of pneumonia were eligible for study participation. The study was approved by the ethics review board of the University Medical Center Utrecht (reference number 10/148). Written informed consent for data collection was obtained within 72 hours after hospital admission.


Data collection
Data on HCAP criteria, co-morbidities, clinical presentation, antibiotic use, complications and clinical outcome were retrieved prospectively from medical records by trained research nurses after patient inclusion. As pneumonia acquired in nursing homes are considered as HAP in the Netherlands, these patients were not included in the original trial. Therefore, the following HCAP definition was used: hospitalization within the last 90 days, residence in long-term care facilities other than nursing homes, receiving wound care or intravenous therapy in the previous 30 days or attending haemodialysis clinics.1


Statistical analysis
Descriptive statistics were used to compare baseline characteristics between CAP and HCAP patients. Sensitivity analyses were performed for cases with unknown (U) antibiotic susceptibility which were either assumed to be all susceptible (best-case scenario) or all non-susceptible (worst-case scenario). Predictive values, sensitivity and specificity for non-susceptibility per empirical antibiotic strategy were calculated using 2 x 2 contingency tables. We calculated 95% confidence intervals using the Wilson score interval method.19 Analyses were performed using the Statistical Package for the Social Sciences for Windows (Version SPSS 21.0.0.0). Graphs were created using GraphPad PRISM (Version 7.02).

A total of 2,283 patients with moderate-severe CAP were included in the CAP-START study of which, 527 (23.1%) were classified as HCAP. Among these HCAP patients, 318 (60%) were hospitalized within the last 90 days; 111 (21%) resided in an elderly home; 166 (32%) received intravenous therapy in the previous 30 days; 94 (18%) received wound care in the previous 30 days; and 17 (3%) were on chronic haemodialysis. In comparison to patients with CAP, patients with HCAP were older, had more co-morbidities, had higher disease severity scores (PSI on admission), had higher influenza vaccination rates, were more often dependent on daily living activities (ADL) and more often had treatment restrictions (table 1). Clinical outcomes of patients with HCAP were worse, with higher in-hospital, 30-day and 90-day mortality rates. There were no differences between patients with CAP and HCAP regarding the frequency with which microbiological testing was performed, except for a slightly higher rate of Legionella urinary antigen testing in patients with CAP (table 1). 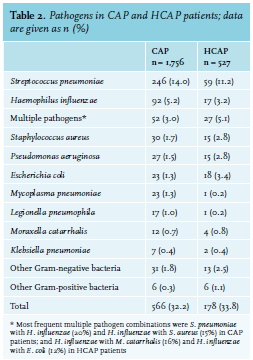 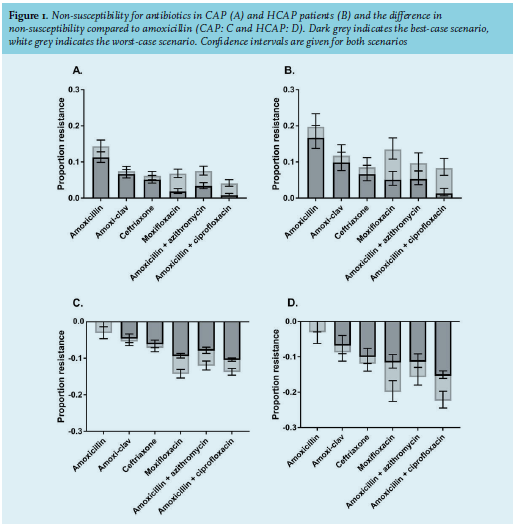 Our findings are comparable to previous reports.14-16,20 Naturally, this difference in non-susceptibility could be reduced by broadening the empiric antibiotic spectrum for HCAP patients. To our knowledge, this is the first study to assess the predictive value of HCAP criteria for non-susceptibility to narrow-spectrum beta-lactams. As such, the presented data may be useful in the discussion of whether HCAP should be implemented into CAP guidelines in settings where narrow-spectrum beta–lactam monotherapy is the first choice of treatment. Despite the differences in aetiology between CAP and HCAP patients, several observational studies from the United States have failed to demonstrate benefit of broad-spectrum empirical antibiotics on the clinical outcome of HCAP patients, with some even resulting in worse clinical outcomes.3-5 However, these observational studies most likely suffered from confounding by indication, where underlying conditions such as frailty, severity of disease and treatment restrictions may have influenced the association between treatment and outcome of HCAP patients. In addition, being able to predict non-susceptibility to empirical antibiotics does not necessarily mean that such patients would benefit from broader empirical therapy. It may also be safe to start with narrow-spectrum antibiotics and escalate treatment based on culture or urine antigen testing results. Therefore, proper randomised trials are required to assess treatment effects on clinical outcome in HCAP patients in a valid way. As the criteria for HCAP have often been questioned, multiple studies have evaluated other risk factors or scores to predict antibiotic resistance in CAP patients. 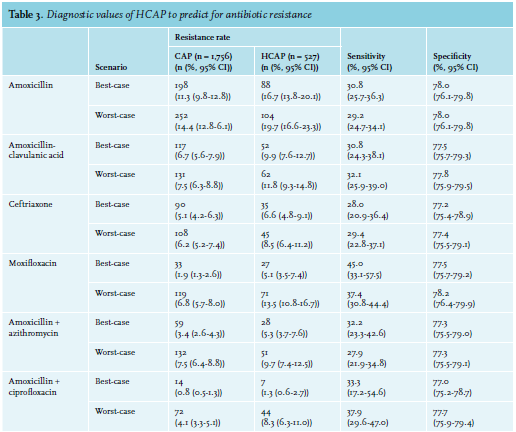 The risk factors evaluated to date include family members with resistant bacteria, severe pneumonia, prior antibiotic use, functional status, ICU admission, immunosuppression, co-morbidities (cerebrovascular disease, diabetes, COPD), gastric acid suppression medication, tube feeding, prior infection with a drug-resistant pathogen and MRSA colonization.13,14,16,17,20,21,22 However, many of these risk factors were evaluated in settings with a high prevalence of antibiotic resistance. Whether their predictive value can be generalised to settings with a low prevalence of antibiotic resistance remains to be elucidated. Moreover, many of the aforementioned risk factors, such as previous colonization with MRSA, are not appropriate for settings with low prevalence of antibiotic resistance. In an additional analysis, we explored the predictive value of severe pneumonia (CURB-65 score > 2), prior antibiotic use, functional status (ADL dependence), immunosuppression and co-morbidities (cardiovascular disease, diabetes mellitus, COPD) in a multivariable model. From these variables, only HCAP, immunosuppression, cerebrovascular disease and diabetes mellitus were predictive for amoxicillin non-susceptibility (supplementary table S2). However, the discriminative capacity of the multivariable model remained limited. The predictive value of these variables, in combination with other promising predictors (such as previous colonisation with resistant bacteria) should be evaluated in a prospective cohort study.
This study has several strengths. We used high quality data from a prospective multicentre trial, including consecutive patients with moderate-severe communityacquired pneumonia, irrespective of whether a bacterial pathogen was isolated. In contrast to including patients with positive cultures only, the predictive values presented here are directly relevant for clinical practice.13,17,20 In addition, we used extensive antibiotic susceptibility data and assessed non-susceptibility over a range of different empirical antibiotic treatment regimens. There were also several limitations. First, patients residing in nursing homes were excluded because their disease was not considered to be CAP. Therefore, one could argue that we did not include the entire spectrum/domain of HCAP and the presented results might not be generalisable to the international HCAP definition. However, these patients would generally be considered as hospital- or nursing-home acquired pneumonia and treated as such. Second, diagnostic testing was performed as part of routine care, which is why blood cultures, sputum cultures and urinary antigen testing were not uniformly performed. Yet, although we cannot exclude the possibility of bias in outcome assessment, there were no major differences between rates of microbiological testing in CAP and HCAP patients. Third, although there were missing susceptibility data for individual antibiotics in certain pathogens, imputed susceptibility data were based on local surveillance data and therefore, generalisable to settings with low antibiotic resistance. In addition, we performed sensitivity analyses on susceptibility patterns that remained unknown with a best-case and worst-case scenario where the unknown susceptibilities were either all susceptible or non-susceptible. These sensitivity analyses yielded only small variations in non-susceptibility for the different antibiotic regimens. Fourth, the probable causative pathogen was, in many cases, based on sputum cultures, which might represent colonisation rather than infection. We therefore only considered plausible pneumonia pathogens in our analyses. Lastly, we assumed cases of pneumonia without a causative pathogen to be susceptible to all antibiotics, which might not be true in case of false-negative culture results for resistant pathogens in a subset of patients. To conclude, HCAP criteria predict for higher non-susceptibility rates to amoxicillin in patients hospitalized with CAP and admitted to non-ICU wards in the Netherlands. However, we consider the absolute risk difference of non-susceptibility to amoxicillin between CAP and HCAP patients as being too low to justify treating all HCAP patients with broad-spectrum antibiotics. Future research should focus on identifying and validating risk factors to predict for narrow-spectrum beta-lactam antibiotic non-susceptibility that are appropriate for settings with low antibiotic resistance. Furthermore, prediction rules need to be evaluated in randomised clinical trials to show benefit on clinical outcome.

The CAP-START trial was supported by a grant (171202002) from the Netherlands Organization for Health Research and Development. Part of these data were presented at the 27th European Congress of Clinical Microbiology and Infectious Disease in Vienna, Austria, from 22-25 April 2017 (#OS0990). MJB: Novartis Europe Advisory Board for Daptomycin; Pfizer Netherlands Advisory Board for vaccines; a grant from Pfizer Netherlands for investigating aetiology of CAP. The other authors declare no conflicts of interests. 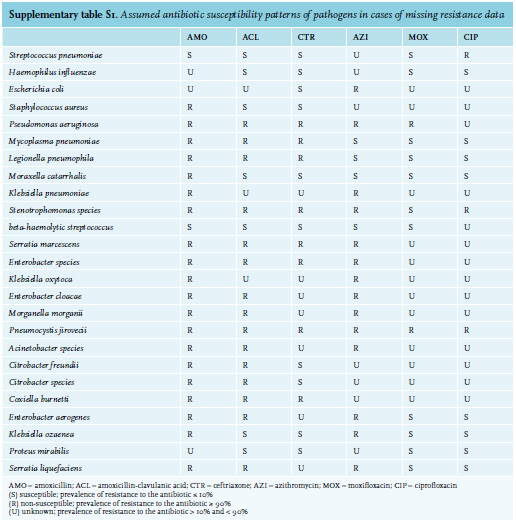