An unusual cause of breast enlargement

A 66-year-old woman presented to the outpatient clinic with bilateral breast enlargement in the last three months. Her medical history reported bilateral breast reduction surgery 20 years prior to presentation, and a hysterectomy 40 years ago due to myoma. She complained of bilateral breast tenderness and a tight feeling in the scars of the previous breast surgery. On physical examination both breasts appeared oedematous and a regular, firm mass measuring 50 mm was palpated on both sides. She had always participated in the Dutch population-based screening program and no abnormalities were seen on mammography two years earlier. A new mammography and ultrasound showed diffuse architectural disturbances with an increase of glandular tissue. No suspicious lymph nodes were seen in the axillae.
We decided to perform breast magnetic resonance imaging (MRI) for inconclusive findings (figure 1).
Bilateral core needle biopsy was performed, revealing adenosis and benign ductal hyperplasia, but no signs of malignancy. The diffuse contrast enhancement of the glandular tissue suggested hormonal stimulation, such as the overuse of hormone preparations, but our patient did not report the use of such medication.
The MRI did not only show abnormalities in the breasts, but ascites was detected as an extramammary finding (figure 1). Additional physical examination revealed a large mass in the abdomen, which, on abdominal ultrasound, seemed to be originating from the ovarium. The gynaecological ultrasound showed an irregular, multilocular solid mass of the right ovary, which was thought to be of malignant origin. Additional computed tomography scan (CT scan) is shown in figure 2. 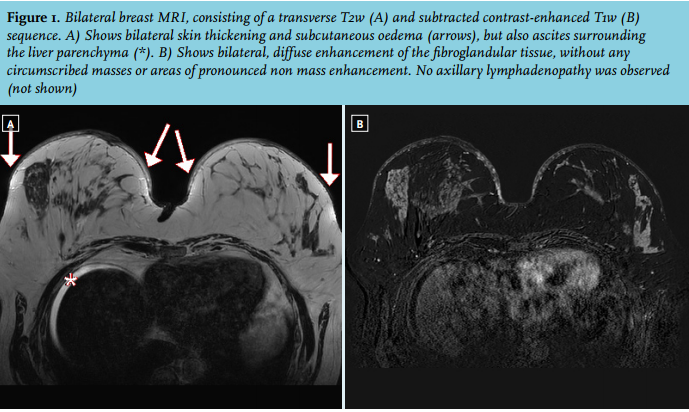 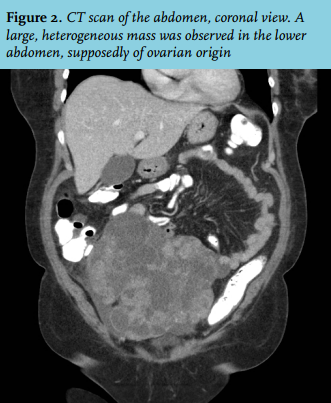