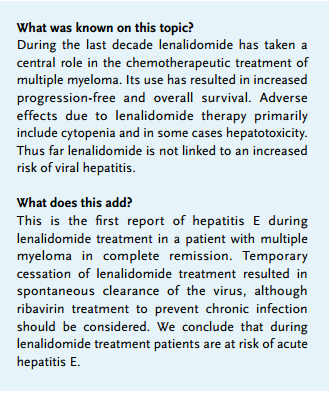 Multiple myeloma is a relatively frequent lymphoproliferative malignancy, representing 10% of diagnosed haematological malignancies.1 It is recommended to treat multiple myeloma depending on risk stratification as well as eligibility for autologous stem cell transplantation, although age can also influence the treatment strategy. During the past decade, lenalidomide is taking a central role in this treatment, for both standard, intermediate and high-risk patients. Lenalidomide can result in serious complications, the most frequent of which is cytopenia,2 but is also related to hepatic complications.3 We present the case of a 69-year-old female who had liver chemistry abnormalities due to acute hepatitis E during lenalidomide therapy for multiple myeloma in complete remission.

A woman was diagnosed with a symptomatic multiple myeloma IgA lambda (International Staging System stage 2) at the age of 66 years. She suffered from mild hypercalcaemia and X-rays showed osteolytic lesions in the cranium, left humerus and right femur. Bone marrow biopsy displayed 80% plasma cells and FISH analysis showed 1q amplification, +5, +9, +11, +15, +15. The patient was included in the HOVON 95 study. After completion of a chemotherapeutic regimen consisting of four courses of bortezomib/cyclophosphamide/dexamethasone, there was a very good partial response. The patient was randomised for high-dosage melphalan followed by autologous stem cell transplantation, resulting in complete remission. Based on the second randomisation, the patient started on maintenance therapy with lenalidomide 10 mg once daily in three out of four weeks. Due to neutropenic fever after six months of maintenance therapy, the dosage was adjusted to 5 mg once daily.
After 2.5 years of lenalidomide therapy, routine blood tests showed abnormal liver chemistry, consisting of a normal bilirubin level with γ-glutamyltransferase of 54 U/l (< 38), alkaline phosphatase of 117 U/l (< 120), ASAT of 102 U/l (< 31), ALAT of 100 U/l (< 34) and lactate dehydrogenase of 269 U/l (< 248) (table 1). The complete blood count showed mild leukopenia (3.7 x 109/l) with normal differentiation, intermittently present throughout treatment, together with normal IgG and IgA levels and a mild IgM depletion (0.30 g/l; range 0.40-2.3 g/l), which was chronic in nature. The IgA lambda count was stable at < 1 g/l and renal function was unaffected. Lenalidomide treatment was discontinued. The patient was, however, admitted eight days later as the derangement of the liver enzymes was progressive and abdominal ultrasound suggested an iso-echogenic lesion of 2.7 x 2.3 cm diameter in the right liver lobe. CT scan of the liver did not show any abnormalities. Serology for hepatitis A/B/C and for autoimmune diseases (ANA, anti-smooth muscle cell and anti-mitochondria antibodies) was negative, and showed prior infection with Cytomegalovirus, Epstein-Barr virus, and toxoplasmosis (e.g. IgG-positive, IgM-negative). However, IgG and IgM antibodies against hepatitis E virus were present, indicating a recent or current hepatitis E infection. The viral load was 245,000 IU/ml and genotyping showed hepatitis E virus genotype 3c. The infection was treated conservatively and 35 days after cessation of lenalidomide treatment, with a slightly elevated γ-glutamyltransferase (45 U/l), lenalidomide was restarted at 5 mg once daily. One month after restarting lenalidomide treatment, the liver chemistry remained normal and the patient was free of symptoms. Repeated PCR analysis for hepatitis E virus was negative. 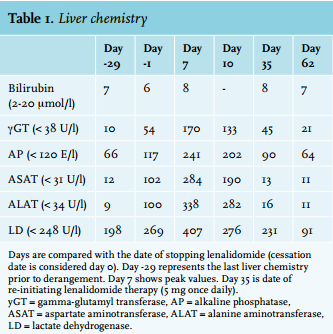 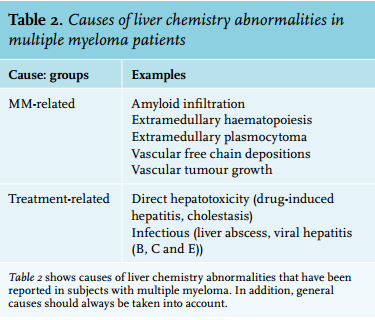 e addition of lenalidomide to multiple myeloma treatment has improved progression-free survival and overall survival, in subjects with5 and without autologous stem cell transplantation,6 as well as in subjects with newly diagnosed multiple myeloma7 and multiple myeloma relapses.8 The main adverse effect of lenalidomide is cytopenia, presenting in approximately 50% of patients on lenalidomide therapy.2 Neutropenia is most common, occurring in 27%2 to 33%9 of patients and resulting in increased risk of infections, which can be lethal.2 Thromboembolic complications are also observed relatively frequently.2,9 Direct hepatotoxicity from lenalidomide has only been described in four patients with multiple myeloma.3 This adverse effect presented within two weeks after starting treatment and cessation of lenalidomide resulted in normalisation of the liver chemistry within 30 days. Although the exact mechanism for the hepatotoxicity was unknown, renal insufficiency might have contributed to it. Two of these four patients had renal insufficiency prior to treatment and as lenalidomide is primarily excreted via the kidneys, dose adjustment in such patients is advised.10 These patients, however, received a high dosage of lenalidomide, e.g. 25 mg/day, not adjusted to renal function. One additional case report described a clear cause of the liver chemistry abnormalities during lenalidomide treatment, namely an acute hepatitis B virus infection, although this patient was suffering from a myelodysplastic syndrome.11
We present a case of acute asymptomatic hepatitis E during lenalidomide treatment for multiple myeloma in complete remission. Hepatitis E is primarily diagnosed in developing countries, but its incidence in the Western world is rising.12 Transmission of the hepatitis E virus varies between the different genotypes. Genotype 1 and 2 are transmitted via human contact, mainly via ingestion of faecally contaminated water, whereas genotypes 3 and 4 are zoonotic viruses, often transmitted via undercooked pork, deer, bore or swine. Genotype 3 is the most prevalent in the developed world and can also be transmitted via blood transfusions and solid organ transplantations. Our patient was not exposed to these risk factors and blood analyses did not show quantitative changes in leukocytes or immunoglobulins. Other than ingestion of contaminated food, we do not have a clear cause of hepatitis E infection. The influence of lenalidomide on the immune system, as has been shown for T-cells, natural killer cells and cytokine production, might have made our subject prone to hepatitis E infection,13 but being the first case of hepatitis E during lenalidomide treatment, this is not supported by scientific evidence.
Hepatitis E infection is often asymptomatic and self-limiting but in immunocompromised patients can result in a chronic disease (e.g. HEV RNA present in serum/stool > 3 months). A chronic infection can ultimately cause liver failure or liver graft rejection and these complications are primarily related to hepatitis E virus infection with genotype 3. Risk groups include patients with haematological malignancies, HIV infection or after organ transplantation.12,14 Incidence rates in solid organ transplant patients vary between 4 and 8%, with 60% conversion to chronic infection.14 Treatment options for acute hepatitis E in patients with haematological malignancies, with the aim of preventing chronic infection, are either conservative or ribavirin treatment.15 Conservative treatment results in clearance of the virus in 64% of cases, although it is uncertain whether maintenance treatment for the haematological malignancy should be temporarily discontinued. Ribavirin treatment for at least three months can result in a 100% clearance of the virus, during which 75% of patients can continue maintenance treatment as planned. Based on the current data, all retrospective in nature, we would therefore consider a three-month ribavirin treatment regimen while continuing cytotoxic therapy, but prospective studies are warranted. The risk of haemolytic anaemia due to ribavirin, especially in combination with cytotoxic maintenance therapy, is a matter of concern.
Thus far, in immunocompromised patients the focus was mainly pointed towards the risk of hepatitis B reactivation, especially during rituximab treatment.16 Based on the case presented here, the differential diagnosis for liver chemistry abnormalities during lenalidomide treatment should include acute hepatitis E (table 2). When hepatitis E is suspected, PCR analysis is warranted, as the immunocompromised state due to lenalidomide can result in negative serological testing.12,15 This can aid in timely diagnosis and treatment of hepatitis E and as such prevention of chronic hepatitis E and possible liver failure.

This is the first reported case of hepatitis E infection in a patient with complete remission of multiple myeloma, while being treated with lenalidomide. Cessation of lenalidomide resulted in normalisation of liver chemistry and clearance of the virus within one month. Physicians should be aware of the risk of hepatitis E during lenalidomide treatment. In case of acute hepatitis E, treatment with ribavirin has to be considered to prevent chronic infection and hepatic complications.

The authors would like to thank Professor H.L. Zaaijer, microbiologist, Academic Medical Center Amsterdam, for his critical review of this manuscript