An 84-year-old woman was admitted for diarrhoea and weight loss occurring over the past six months. She described an attack of abdominal pain and bowel obstruction five months previously. Oral intake was stopped and she was switched to intravenous fluids. A laparotomy failed to define the cause of obstruction at that time. The obstruction disappeared after the operation, but her diarrhoea (up to 9 to 10 times daily, watery) recurred, although stool investigations remained negative. An abdominal MRI was negative.
She was admitted with another episode of bowel obstruction. On this admission, a plain X-ray showed multiple air-fluid levels (figure 1) and an abdominal CT revealed distal ileal dilatation of 5.5 cm. Laboratory studies showed iron deficiency anaemia. Her blood urea nitrogen, creatinine, transaminase, glucose and electrolyte levels were normal. Oral feeding was stopped and intravenous fluid was initiated. The obstruction improved within two days without any intervention.
A gastroduodenoscopy was performed and duodenal biopsies showed active enteritis with partial subtotal atrophy and increased intraepithelial lymphocytes (figure 2). CD3 staining confirmed an increased number (> 25 per 100 enterocytes) of lymphocytes in the intestinal epithelium. Bone-mineral density showed severe osteoporosis. 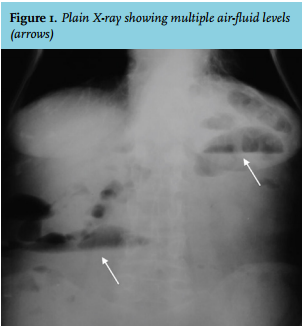 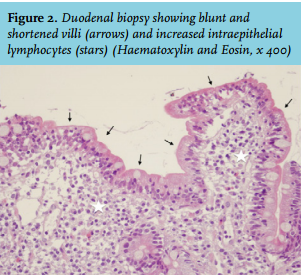