When do patients prefer a direct oral anticoagulant over a vitamin K antagonist? 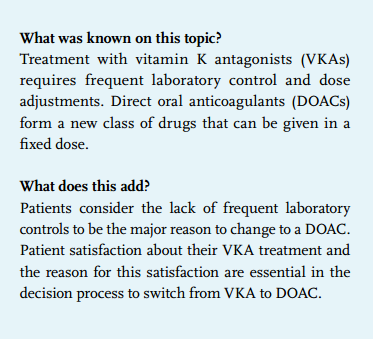 Currently around 400,000 persons are treated with a vitamin K antagonist (VKA) in the Netherlands. The indications for use include atrial fibrillation, venous thrombosis and artificial heart valves.1
Considering the disadvantages of VKA, such as a small therapeutic window, requirement of frequent laboratory testing and interaction with food and medication, there is a need for an alternative. Therefore, direct oral anticoagulants (DOACs) were developed and recently introduced clinically. In contrary to a VKA, DOACs act directly on the coagulation system. Currently four DOACs are available: dabigatran, rivaroxaban, apixaban and edoxaban. Large phase III studies have been completed for these four compounds, for the indication of atrial fibrillation, as well as for venous thromboembolism.2
A lot of research has been done on the efficacy and safety of DOACs, but the view of the user, the patient, has not been explored. That is why the opinion of patients with atrial fibrillation about DOACs in comparison with their usual VKA is investigated in this study. Furthermore, the influence of different variables such as age, education and treatment satisfaction are analysed to better understand the preferences for treatment.

Study population
In this investigation the opinions were analysed of a random sample of 200 patients who are treated with VKA for the indication of atrial fibrillation at the Thrombosis Service in Amsterdam, the Netherlands. This was achieved by a questionnaire, which was sent by post and also included a return envelope and a recommendation letter from the director of the Thrombosis Service. After three weeks all 200 patients received a reminder.3

Survey format
The survey was designed according to the treatment trade-off technique, a method that offers the opportunity to compare the therapy preference between two different options.4 The trade-off included four consecutive scenarios: 1 (no need for laboratory controls); 2 (less bleeding); 3 (less interactions); 4 (more effective). In each scenario one variable was changed and the patient was asked what their preference would be for each scenario: stay on VKA or change to a DOAC.5,6
The scenarios were developed in a way in which a proven statement for a DOAC is added for the following scenario. Using this approach it can be tested which statement the patient finds most important in his/her consideration for switching to a DOAC. In scenario 1 the efficacy and risks of VKA and DOAC are the same; the only difference is that the absence of the need for laboratory control for DOACs is mentioned. Scenario 1 is used as the baseline. In scenario 2, the additional statement indicates that the DOAC may be associated with a lower risk of severe bleeding. In scenario 3 it is made clear that a DOAC is less influenced by food and other medication. Finally, in scenario 4 it is stated that a DOAC is more effective. For each scenario the patient had to choose between 5 options; from 1: ‘definitely stay on VKA’ to 5: ‘definitely switch to a DOAC’.
Feedback on the clarity and content of the questionnaire was obtained from different sources prior to constructing the final version of the survey. One of these sources was a large market and opinion company in Amsterdam with the aim to find the best way of communication to patients. A pilot survey was presented to 20 persons without atrial fibrillation to check the comprehensibility. Finally, information from six in-depth interviews with patients of the Thrombosis Service in Amsterdam was used to complete the design of the survey.

Statistical analysis
We set the minimum value of the response rate at 50%, with a target value of 70%. The data were analysed with a chi-square test. If this test was significant (p-value < 0.05) a generalised estimating equation was performed.7 The generalised estimating equation takes into account that the preferences of all individuals are correlated in each single scenario. The chi-square test measures whether the percentage of patients that have a certain preference is equal over the whole study population.
The fourth and fifth option ‘I would probably switch to a DOAC’ and ‘I definitely would switch to a DOAC’ are merged for the present analyses. Certain variables were studied for the scenario preferences, i.e. age as dichotomous (≤ 65 and > 65 years) and quartiles, gender as men and women, education as highly educated (higher professional education and university) and other (all other levels of education). These variables were also tested with three groups and higher general continued education and pre-university education (HAVO, HBS and VWO) was used as the average education level group. The duration of current VKA treatment was analysed as < 4 years or > 4 years and in quartiles. The satisfaction level about current treatment was divided into three options: completely satisfied, satisfied and not satisfied/neutral.

Study population and response
In total 120 patients responded with a completed survey and were included in the analysis (response rate 60%, figure 1). The characteristics of the respondents are detailed in table 1. The average age was 75 years and half of the respondents had been treated with VKA for their atrial fibrillation for over four years. A total of 75% of respondents indicated that they were satisfied with their current treatment. 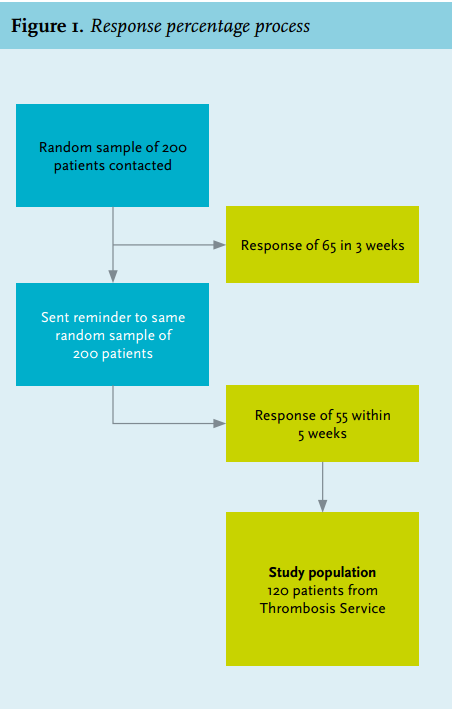 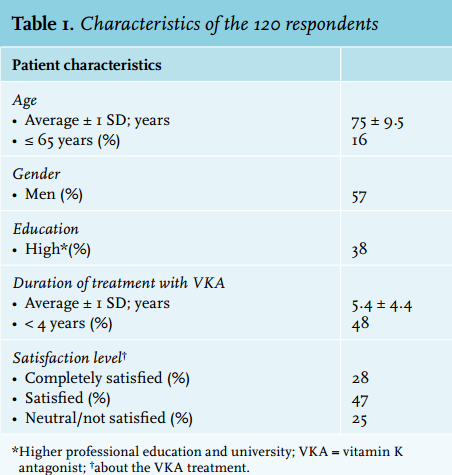 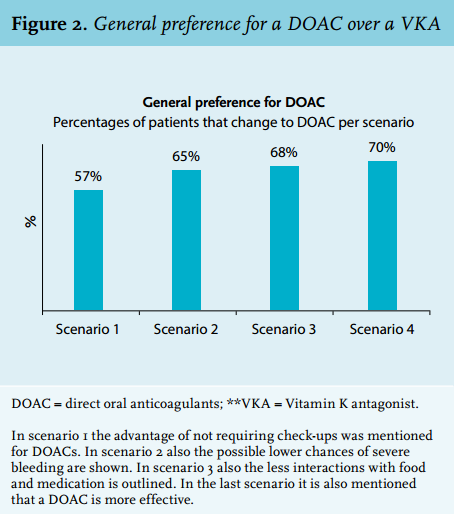 Preference
First the preference of the whole population per scenario between DOAC and VKA (figure 2) was analysed. In scenario 1, where it is detailed that a DOAC does not require laboratory investigations, slightly more than half (57%) of the respondents would switch to DOAC. When, in scenario 2, it is added that the risk of severe bleeding is decreased with a DOAC, this preference rises to 65% (trend value; p = 0.006, CI: 1.11-1.85). The advantage of no interactions with food or medication or greater efficacy of a DOAC did not result in noteworthy changes in the preference.

Variables preference
The variables age, gender, education and duration of treatment did not influence the preference for treatment. The satisfaction of the patient with the VKA treatment played a critical role.
Data were available for 118 respondents (figure 3). In the group of the respondents who are completely satisfied with their current VKA treatment, approximately a quarter (27%) preferred a DOAC over VKA in scenario 1, which increased to 41% in scenario 2. In contrast, in the group who indicated not to be satisfied or to be neutral regarding their current therapy, which encompasses a quarter of the study population, 83% preferred a DOAC in scenario 1. 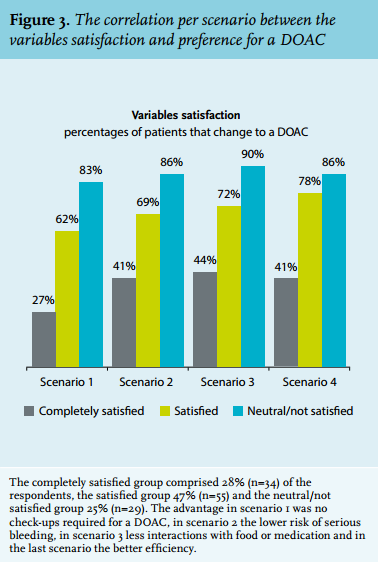 Medical recommendation
A relevant recommendation for medical practice is that besides including the patient’s opinion in changing the type of anticoagulation, physicians should determine patient satisfaction about the current treatment. It appears to be the most important component in the decision to switch to a DOAC. The results show that in the category ‘satisfied about current VKA treatment’ already 55% would prefer a DOAC over VKA, only on the basis of no requirement for laboratory checks. A reason to prefer a DOAC to a VKA is the lack of laboratory visits despite satisfaction with the VKA treatment.

The most striking finding is that slightly more than half of the whole study population would already prefer a DOAC if only the need for regular blood checks is eliminated. This is a scenario that reflects the reality of DOAC treatment. When a small decrease in the risk of severe bleeding is added, this preference rises to two-thirds of the study population. These two factors seem to have the largest influence on the preference of the studied patients. An interesting fact is that the advantages that are thought to be of great importance by physicians, i.e. less interaction and possible greater effectiveness, are barely of importance to the patient.
Surprisingly, the studied variables age, education level and duration of treatment did not seem to have an influence on the preference, although results did show that satisfaction about current treatment played a significant role. There is a clear difference between the ‘completely satisfied’ and the ‘neutral/not satisfied’ group of patients, 27% and 83% respectively in the first scenario. It can be concluded that it is meaningful to be aware of the satisfaction level of the patient if a switch to a DOAC is considered.
As mentioned earlier, large trials on safety and efficacy have been completed for each DOAC, but the opinion of the patient should be explored more clearly. In Germany, investigators are currently developing an instrument for doctors to identify the preference of a patient, thereby increasing compliance as well. By means of this instrument patients are asked to participate in the choice of anticoagulants to improve therapy outcome. From this it appears that patient preference plays an important role.8

Some of the aspects of our study require comment. First, the size of the study sample of 200 atrial fibrillation patients is limited. However, the study population is a random sample and representative for the atrial fibrillation patients seen at the Thrombosis Service of Amsterdam. Second, the response rate of 60% was moderate, though not unusual for postal questionnaires. This percentage is between our earlier fixed margins.
We used methods to make the response rate as high as possible, such as sending it by post with a recommendation letter from the director of the Service and a return envelope.3 The observed response rate may affect generalisation of the findings of the present study. Third, it should be realised that, at present, specific antidotes for DOACs are lacking in case of major bleeding. The importance of this for the choice of the patient was not assessed in this study.
Furthermore the scenarios in the questionnaires sent out were all presented in the same order. Possible bias due to the influence of the scenario mentioned earlier cannot be investigated in this way and is not included in the analysis. The average high age of the study population increases the chance of not having a computer; the choice of a postal version eliminated this limitation.
Comments are conceivable on the structure of the survey. The treatment trade-off technique has a certain complexity, which is not universally understood.4 On the other hand per scenario a possible advantage for a DOAC is added; this can give the impression that this will influence the opinion of the patient. However, we believe that this is not the case, since each added statement is supported by findings from clinical studies. The only expectation is in scenario 4, the possible better efficacy of a DOAC; however, this scenario hardly influenced the preference of the patient. The goal was to investigate what the patient considers to be important in switching to another medicine and which reasons would determine that switch. That is why efficacy had to be one of the statements.

Patients considered the lack of the need for regular laboratory control and the lower risk of serious bleeding important arguments to switch to a DOAC, even for patients who are satisfied about their current VKA treatment. Efficacy was considered less important. Less satisfied patients were more likely to prefer a DOAC over a VKA.

There were no conflicts of interest for any of the authors. No grant supports were used for this research. We want to thank the Academic Medical Center and the University of Amsterdam for facilitating the sources and material we needed.