A biopsy of the swelling of the right thigh was taken and demonstrated synovial sarcoma (figure 2A, B and C). For additional staging a CT scan was performed, showing multiple bone and pulmonary ‘cannonball’ metastases. The latter are typically seen in choriocarcinoma, sarcomas, melanoma and testicular cancers.
Synovial sarcoma is a soft tissue sarcoma which originates from primitive mesenchymal tissue on the ending of large joints; however it can occur in any part of the body. Due to its local invasiveness and propensity to metastasise, synovial sarcoma has a high mortality rate. It most often affects adolescents and young adults with a peak incidence in the third decade of life.1 In 2013, 805 sarcomas were diagnosed in the Netherlands with an incidence of about 4.16 per 100,000 patient-years (European standardised rate).2 The diagnosis of synovial sarcoma is made by histological biopsy and is characterised by the presence of the SS18/SSX fusion gene. Before a patient undergoes a biopsy, in a non-metastatic setting, local imaging by means of MRI needs to be done. Subsequently additional staging should be performed by CT scan.3
Treatment depends on the extent of disease. For local disease, surgical resection with neo-adjuvant or adjuvant radiotherapy is the treatment of choice. For locally advanced disease, neo-adjuvant chemotherapy can be considered. Patients with metastasised soft tissue sarcoma should preferably be treated in a trial-related manner. Standard first-line treatment includes doxorubicin (or ifosfamide when doxorubicin is contraindicated) monotherapy with an approximate response rate of 14-30% and a median survival of one year.4 Combination therapy with doxorubicin and ifosfamide does increase response rates by about 10% and should be used in symptomatic patients up to 60 years of age when a response is the goal of treatment. However, this intensive combination does not increase overall survival and has more side effects.4 Nowadays, further line-treatment options include trabectedin and pazopanib.
Our patient was referred to an academic centre, specialised in the treatment of soft tissue malignancies. She immediately started on palliative combination chemotherapy (six cycles of doxorubicin and ifosfamide). After finishing these six cycles of chemotherapy a CT scan of the chest and abdomen was performed, showing a partial response with a decrease in tumour size of the pulmonary metastases as well as the tumour of the right thigh. The largest pulmonary metastasis located in the apical part of the right lung (figure 1A and B) decreased in size from 116 x 40 mm to 50 x 40 mm. The tumour of the right thigh decreased from 100 mm to 56 mm. The response lasted for six months. A year later, she now is stable on trabectedin therapy. 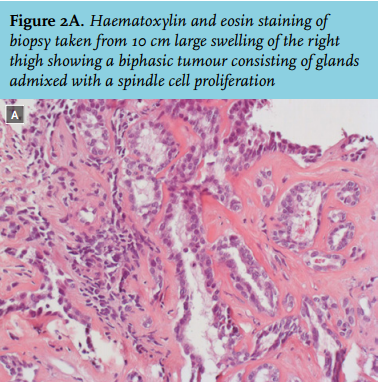