Anticoagulation with dalteparin and nadroparin in nocturnal haemodialysis

During haemodialysis, systemic anticoagulation is necessary to avoid clotting of blood in the extracorporeal circuit. For this purpose, low-molecular-weight heparins (LMWHs) have emerged in recent years as a good alternative to unfractionated heparin.1 LMWHs form a heterogeneous group of preparations with variable molecular weights and half-lives. Half-life in renal failure is extended, as most LMWHs are cleared by renal excretion. Due to the lower molecular weight, LMWHs inactivate thrombin less than unfractionated heparin, and exert their action mainly by inhibiting factor Xa. This specific property can be expressed as the anti-factor Xa to thrombin ratio (anti-Xa/IIa). LMWHs have proven to be safe and well tolerated for the use in haemodialysis patients.2-4 In comparison with unfractionated heparin, LMWHs have a more rapid onset of action, cause less platelet activation and less fibrin deposition on dialyser surfaces, enabling better urea clearance.2,3 A further advantage is the simplicity of use: a single bolus injection at the start of a dialysis session results in enough anticoagulation to cover a four-hour period. The downside is their reduced reversibility by protamine and the lack of a bedside monitoring test, although such a test is being developed.5
Because of the variable duration of action, the dose of LMWH one should administer is established empirically during subsequent haemodialysis sessions by titrating the dosages according to visibility of clot in the dialyser. With the growing use of intensive haemodialysis techniques, such as nocturnal haemodialysis, there is a need for detailed data on anticoagulant activity with different LMWHs during long dialysis sessions. Therefore, we studied the anti-Xa activity after dalteparin and nadroparin, the preparations most commonly used in the Netherlands, in patients on nocturnal haemodialysis.

Patients
Nocturnal haemodialysis patients were included from two different dialysis units, using dalteparin as anticoagulant (centre A) and using nadroparin as anticoagulant (centre B). All patients had end-stage renal disease (ESRD) and were treated with intermittent nocturnal in-centre haemodialysis for at least three months. Exclusion criteria were known malignancy and haemorrhagic or thrombotic coagulation disorders. Written informed consent was obtained from all patients.

Haemodialysis protocol
Patients were treated 3-4 nights a week with a session length of eight hours. Both centres used polysulfone filters, in centre A a polysulfone APS 18U filter (Asahi) on a Nikkiso DBB05 monitor, and centre B a polysulfone Fx8 or Fx10 filter (Fresenius) on a Fresenius 4008 monitor. The extracorporeal systems were primed with isotonic saline without anticoagulant. Blood flow varied between 100-300 ml/min and dialysate flow was 300-500 ml/min, depending on the patient’s needs.

Dose finding of LMWHs
Both dalteparin (Fragmin®, Pfizer, New York City, US) and nadroparin (Fraxiparin®, GlaxoSmithKline, Brentford, UK) were given as a bolus injection into the arterial tubing line prior to haemodialysis, followed by a second bolus injection four hours after the start of haemodialysis. The dosing algorithm prescribed a second bolus of half the dose of the first one when a patient started his first session of nocturnal haemodialysis. Hereafter, the individual LMWH dose requirement was adjusted by a stepwise protocol, based on judgement of the extracorporeal circuit at the end of treatment by experienced haemodialysis nurses (no clotting in air traps, clean dialyser, time to stop bleeding from access needle sites). The study was performed when patients were on stable anticoagulant dosages for at least four weeks, during a midweek session after a one-night dialysis-free interval.

Blood sampling
Blood samples were taken at the start of haemodialysis treatment, and at t = 4 and t = 8 hours. The first sample was drawn from the arterial dialysis needle after clean puncture of the fistula and before application of LMWH. To avoid artificial coagulation activation, the first 5 ml of blood were discarded. During extracorporeal circulation and at the end of dialysis, blood was collected from the arterial line of the circuit into a 4.5 ml vacutainer (Becton Dickinson & Company, Franklin Lakes, US) containing 0.5 ml of 3.2% sodium citrate, and processed without delay. Laboratory assessment of anti-factor-Xa activity was performed using the Biophen Heparin (LRT) chromogenic assay.

Patient demographics, medication use, and dialysis adequacy are shown in table 1. Mean age was 55.1±17.1 years and dialysis vintage was about 1.5 years. Dialysis access consisted of a native fistula in 18 patients and a PTFE graft in seven patients. No premature interruptions of the haemodialysis sessions occurred by circuit clotting in any of the patients. No prolonged bleeding times from access sites nor other bleeding complications were noted. 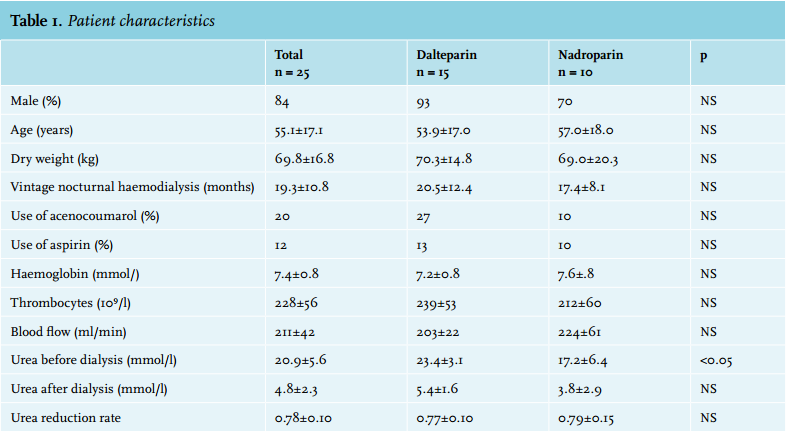 Desired anti-Xa activity
Although there are no guidelines for the desired ranges of anti-Xa activity after LMWH administration in haemodialysis, various sources report target ranges between 0.2 and 0.6 IU/ml.6-8 When these ranges are applied to our patients, it appears that with the use of dalteparin most patients remained within the target range throughout nocturnal dialysis (figure 2). With the use of nadroparin, about half of the patients were already over-anticoagulated halfway through the dialysis session, and 75% of patients had anti-Xa activity > 0.60 at the end of dialysis.

Administration of two doses of LMWH is an effective way of anticoagulation in nocturnal haemodialysis: anticoagulation was sufficient throughout the whole dialysis session in all patients, showing that both treatments were effective without signs of clotting or bleeding. The use of nadroparin led to higher levels of anti-Xa activity with longer duration of action, compared with anticoagulation with dalteparin. This is the first study to assess the level of anticoagulation with LMWH in eight-hour dialysis, and the first one to describe different types of LMWH in this dialysis modality.
Marked differences exist between several LMWH preparations due to different methods of depolymerisation. As a result, they vary in molecular weight, elimination rate and anticoagulatory effect. Dalteparin has a higher molecular weight than nadroparin (table 3). This leads to combined hepatic and renal clearance, whereas nadroparin is eliminated by the kidney only. Elimination half-life is longest and antiXa/IIa ratio is highest for nadroparin. In short, the properties of dalteparin lie in between those of unfractionated heparin and nadroparin. Although national pharmaceutical guidelines advise similar doses for both LMWHs (70 IU/kg),6,9 it is apprehensible from the above information that the required dose of nadroparin will be lower than that of dalteparin. This is consistent with data in healthy volunteers, in whom a 1.54 times greater anti-Xa activity for nadroparin was found compared with dalteparin.10 Despite the lower dose of nadroparin in our study, however, the level of anticoagulation measured by anti-Xa activity throughout dialysis was higher for nadroparin. This must be caused by slower elimination of nadroparin compared with dalteparin. As data on LMWH concentrations in dialysate are lacking, exact clearance of these drugs during haemodialysis is not known. Regarding anticoagulant effect during haemodialysis, Nigten et al. measured serial anti-Xa activity during conventional haemodialysis and extrapolated that the elimination of dalteparin follows a linear process.7
We measured detectable anti-factor Xa levels as long as 40 hours after the previous dialysis session in almost all of our patients on nadroparin. One could argue that this level of anticoagulation is not relevant, as our patients did not experience any bleeding complications. On the other hand, if a range of 0.2-0.6 IU/ml is considered adequate, the average dosing in our entire population was too high. Many patients reached anti-factor Xa levels > 0.6 IU/ml which seems to be more than needed for appropriate clot prevention.
Our study has several limitations. First, nocturnal haemodialysis was performed in two different centres. Theoretically, it could have been possible that local habits in adjusting the LMWH dose influenced the results, but we consider this highly unlikely. Furthermore, the difference in dose and anti-Xa activity between dalteparin and nadroparin was large, and plausible in light of pharmacokinetic data. Second, the dosing of LMWH was adjusted according to subjective endpoints. However, this is the common way to adjust doses of anticoagulants, as most centres do not formally monitor dosage-response effects.4 Thirdly, different dialysis filters and extracorporeal systems were used in the two groups, but both were low-flux polysulfone filters, and no difference in LMWH clearance has been shown in four different types of low-flux filters.11 Finally, the present study included both patients without and with oral anticoagulant drugs in both groups; however, when we excluded these patients from our analysis the outcome was not influenced.
The results of this study can be of use for the execution of long haemodialysis, either in-centre or at home. Compared with anticoagulation with continuous infusion of heparin, LMWH has the advantage of easy and quick administration, and less risk of dosing mistakes. For in-centre nocturnal haemodialysis, a regimen with two doses of dalteparin (at t = 0 and t = 4 hours) could be used, which is easy to use for dialysis nurses and guarantees adequate anticoagulation throughout the dialysis session, without the disadvantage of extensive anticoagulation after dialysis. Of course, administering a second dose halfway through dialysis is not suitable for home haemodialysis, as the patient or his partner would have to wake up in the middle of the night to administer the second dose. Because of the prolonged action, one could choose to administer a single dose of nadroparin, with a possibility of extended anticoagulation after haemodialysis. This has been applied by others in five-hour sessions with a single high nadroparin dose of 12,500 IU.12 Based on our findings we propose an algorithm for dosing of nadroparin and dalteparin in nocturnal dialysis (figure 3). We acknowledge that further studies are needed to ensure adequate anticoagulation during eight-hour sessions with a single dose of nadroparin.
In conclusion, adequate and safe prevention of clot formation during long nocturnal haemodialysis can be established by using LMWH. In the present study, the use of dalteparin led to a large proportion of patients reaching and not exceeding target ranges of anticoagulation, whereas nadroparin showed prolonged duration of action up to the next dialysis session. Knowledge of these data is valuable in assessing adequate dosing of LMWH, and we advocate the measurement of anti-Xa activity when LMWH is used during nocturnal haemodialysis. 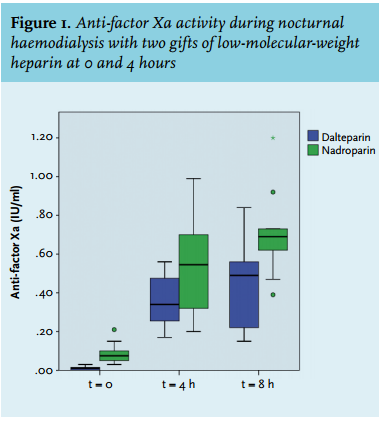 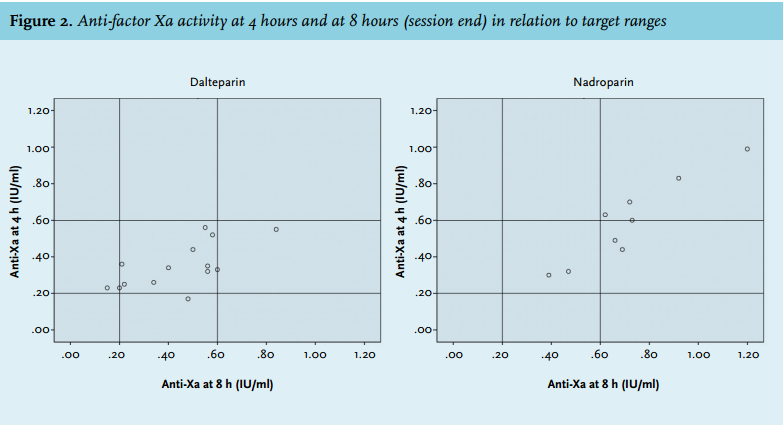 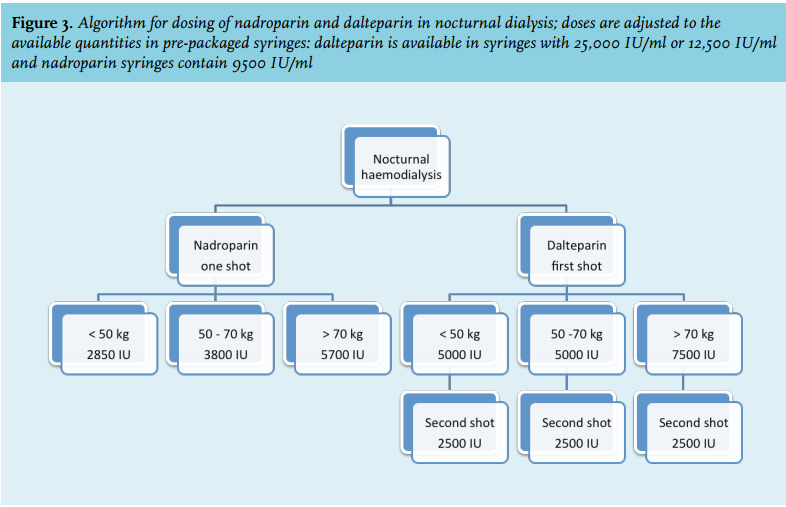 The authors declare no conflicts of interest