Thigh mass in a 22-year-old female

In September 2010, a 22-year-old female was admitted to our hospital with a painless and gradually growing mass in the left thigh for many months. She had no past medical history of disease and had no family history of a similar mass. The patient did not suffer from night sweats, fever or weight loss. Physical examination revealed a 3 x 2 cm painless, immobile, well-defined and firm mass in the inner left thigh. There was no lymphadenopathy in lymph node stations or hepato-splenomegaly. Laboratory examination showed no abnormalities, including normal erythrocyte sedimentation rate (ESR), no anaemia, no haemolysis, and normal differentiation. The chest X-ray was normal. Ultrasonic examination showed two adjacent well-circumscribed hypoechoic masses in the fat layer of the inner left thigh, which respectively measured 3.6 x 1.4 x 2.5 cm (figure 1A) (arrow) and 1.4 x 0.8 cm (figure 1B) (arrow), with irregular shapes and inhomogenous internal echo. The blood flow signal in the masses could be explored (figure 1C). Computed tomography (CT) (figure 1D) showed a well-defined soft tissue mass in the fat layer of the upper-middle inner left thigh, which measured 1.5 x 2.0 x 3.75 cm. Its density is uniform and consistent with the muscle density (arrow). The patient underwent extended surgical resection of the mass on the left thigh following the initial diagnosis. Macroscopic assessment of the resected specimen identified the presence of two adjacent well-defined and firm masses, the total size of which was about 4.0 x 3.0 x 2.5 cm. Intraoperative frozen section of the specimen revealed numerous plasma cells and a few lymphocytes, and the plasma cells were at the mature phase.

WHAT IS YOUR DIAGNOSIS? 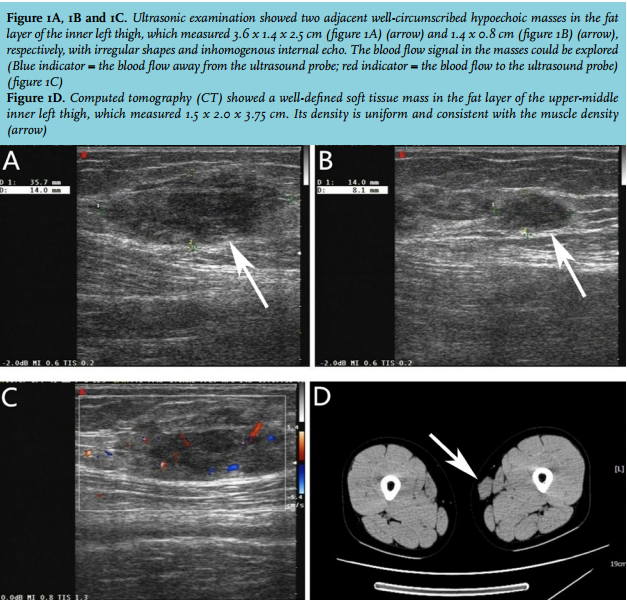