Risk factors for gas-related complications of

Since Inoue et al.1 a pplied peroral endoscopic myotomy (POEM) to treat achalasia in 2010, its safety and efficacy have been evaluated in both animal studies and clinical trials.2-6 However, various studies have demonstrated the presence of some POEM-associated complications, such as infections, pleural effusion, haemorrhage, mucosal perforation and gastrointestinal tract fistula. The most common complications are gas-related, such as subcutaneous emphysema, pneumothorax and pneumoperitoneum. The chance of occurrence varied greatly among different reports and could be as high as 100%.7,8 Although many patients could obtain relief through conservative treatment, these complications might cause discomfort, extend the duration of the operation and even result in pulmonary a telectasis and respiratory failure in severe cases, when invasive interventions are needed to relieve the symptoms.8 Thus, it is of vital importance to detect and prevent the occurrence of complications. Our objective was to determine the risk factors for gas-related complications so as to provide the rationale for preventing the occurrence of these complications.

Patient clinical data
A total of 216 achalasia patients receiving POEM from August 2011 to November 2013 were recruited, comprising 109 males and 107 females with a mean age of 41.9 (14-74) years. Prior to POEM, the mean Eckardt score9 and duration of symptoms were 6.2±1.7 and 4 (0.5-33) years, respectively. The Eckardt score grading was: II (n = 8), III (n = 127) and IV (n = 81). The grading of Henderson criteria10 for t he degree of oesophageal dilatation was: I (n = 21), II (n = 169) and III (n = 26). There were 11 cases of sigmoid-type oesophagus. Those undergoing previous therapy with calcium antagonists or nitrates accounted for 1.9% (4/216), stenting 1.9% (4/216), balloon dilatation 9.3% (20/216) and laparoscopic Heller’s myotomy 3.2% (7/216). Thirteen related risk factors were recorded: patient age, gender, symptom duration, previous therapies, Eckardt score, oesophageal dilatation degree, sigmoid-type oesophagus, simple longitudinal mucosal incision, tunnel length, tunnel width, myotomy depth, myotomy length and operative time. The study protocol conforms to the ethical guidelines of the 1975 Declaration of Helsinki (6th revision, 2008) as reflected in a priori approval by the institution’s Human Research Committee. Informed consent was obtained from all patients before the procedure was performed. All patients were informed of the possible complications and other possible treatment options.

The POEM procedure was performed as follows:

Figures 1 and 2 depict an example of the peroral endoscopic full-thickness myotomy procedure. 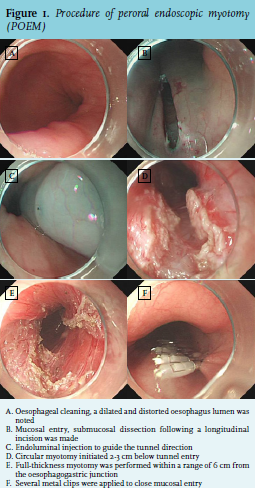 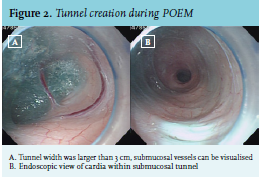 Follow-up
Patients were scheduled for a follow-up visit at 1, 3, 6 and 12 months after POEM and then annually for oesophagogastroduodenoscopy to observe the healing of the wound and check for any signs of reflux oesophagitis. They also underwent barium swallow to measure the oesophageal diameter. Patients were contacted by telephone to assess the occurrence of complications and obtain a current Eckardt score.

Statistical analysis Continuous variables were expressed as mean ± standard deviation. All data were analysed with SPSS17.0 statistical software. Chi-square or Fisher’s test was used for univariate analyses and logistic regression for multivariate analyses.

Statistical analysis
Continuous variables were expressed as mean ± standard deviation. All data were analysed with SPSS17.0 statistical software. Chi-square or Fisher’s test was used for univariate analyses and logistic regression for multivariate analyses.

Complications
Of the total patients, 28 (13.0%) had complications, namely gas-related complications (n = 22, 10.2%), tunnel mucosal perforation (n = 3, 1.39%), reflux oesophagitis (n = 2, 0.92%) and acute peritonitis (n = 1, 0.46%). The 22 cases of gas-related complications were subcutaneous emphysema (n = 21) and mediastinal emphysema plus subcutaneous emphysema (n = 1). For the 21 cases of simple subcutaneous emphysema, no special intervention was required, and all were absorbed spontaneously within 3-5 days. The patient with mediastinal emphysema plus subcutaneous emphysema had chest tightness, which disappeared after deflation through a subcutaneous puncture. For three cases of tunnel mucosal perforation, 1-2 clips were applied for closure. After an oral intake of PPI, the symptoms of patients with reflux oesophagitis were relieved. The patients with acute peritonitis had a postoperative onset of moderate fever (highest body temperature of 38.9°C), epigastric pain, epigastric tenderness and rebound tenderness. The symptoms subsided after a five-day course of antibiotics. 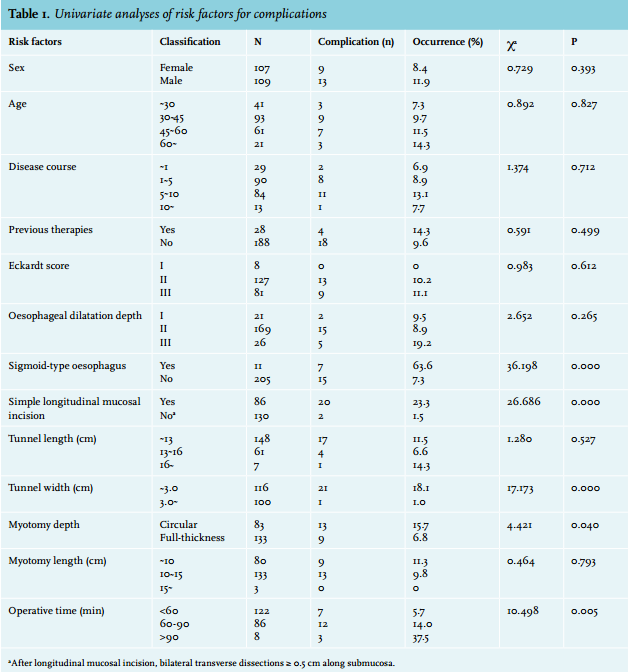 In addition, we found that tunnel width was an independent risk factor for gas-related complications. The occurrence was 18.1% (21/116) in the cases with a tunnel width ≤ 3 cm, but it decreased to 1% (1/100) in the cases with a tunnel width > 3 cm. These findings suggest that sufficient tunnel width might markedly reduce the risk of gas-related complications. Since the endoscope itself occupies a certain amount of space, the tunnel should be wide enough to ensure the presence of ample space between the instrument and tunnel during the procedure. In this way, sufficient space could not only reduce the difficulty in handling the endoscope within the tunnel, but also lessen the procedure-related injuries of tunnel mucosa, blood vessel, peri-oesophageal or gastric serous membrane. Moreover, this facilitates gas diffusion and prevents the formation of high pressure within the tunnel, particularly in an extremely twisting oesophagus. Inoue et al. recommended that tunnel width should be greater than or equal to one-third of the oesophageal circumference during POEM.14 In our experience, to effectively lower the occurrence of gas-related complications during POEM, tunnel width should be > 3 cm for those patients without obvious oesophageal twisting.

In addition, we also found that myotomy depth was not a risk factor for gas-related complications. During POEM, most researchers preferred to adopt a simple circular myotomy and preserve the longitudinal muscular layer in order to reduce the chance of gas entry into the thoracic and abdominal cavity. However, some studies have demonstrated that the application of full-thickness myotomy did not increase the occurrence of complications. Moreover, full-thickness myotomy helps accelerate the functional recovery of oesophageal peristalsis and shorten operative duration.7,16 Notably, the longitudinal oesophageal muscle layer is relatively thinner, and is closely connected with the circular muscle, but not with the peri-oesophageal membrane. Unintentional splitting of longitudinal muscle is likely to occur during simple circular myotomy, either due to intra-operative mechanical trauma or electrocautery damage. In our experience, to prevent tunnel perforation and gas-related complications during POEM, one of the most important steps is to maintain the integrity of peri-oesophageal or serous membrane. Yet the integrity of longitudinal muscle should not be overemphasized. In conclusion, simple longitudinal mucosal incision, tunnel width and sigmoid-type oesophagus are independent risk factors for gas-related complications for achalasia during POEM, but not myotomy depth and operative time.